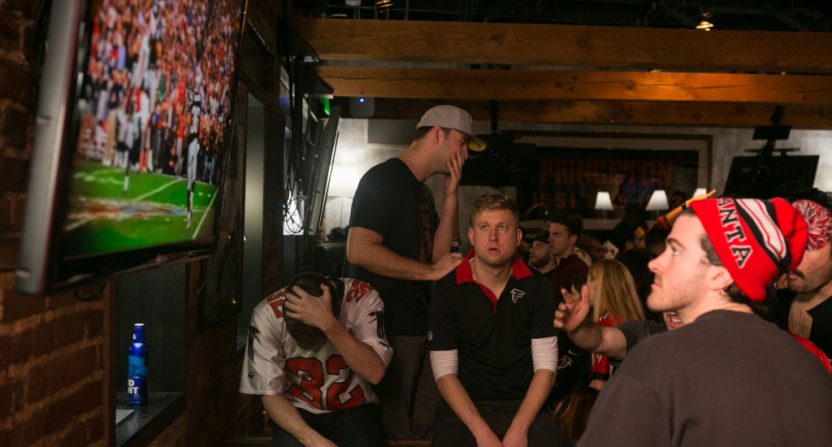 It’s rare when an audience decline of almost 40 per cent year over year is actually probably good news for a broadcaster, but that’s the case with the Super Bowl ratings for Canada’s Bell Media. Bell, the owner of CTV, TSN and numerous other channels, lobbied (with the help of the NFL, Marco Rubio and more) and fought in court against the Canadian Radio-television and Telecommunications Commission’s January 2015 decision to ban simultaneous substitution (simsub) for the Super Bowl, but was unable to stop it, at least not in time for Sunday’s game.

That meant that Canadians were able to watch the U.S. Super Bowl broadcast on Fox complete with the high-budget U.S. ads for the first time, rather than being forced to see the CTV feed (mostly identical except for the ads). In turn, that led to predictions of the audience (and thus, the ad revenue) for the Canadian feed completely tanking. Bell themselves cited the millions of dollars they were expecting to lose as part of the rationale for their recent layoffs.

The 39 per cent loss is still massive (especially considering that the Canadian feed was aired across three channels this year, CTV, CTV Two and TSN), and it still could cost Bell millions. It also led directly to some lost revenue, with some Canadian advertisers buying local ad slots on border Fox stations (which we’ll discuss later). Still, the average audience of 4.47 million viewers Bell was able to retain (down from 7.32 million last year) is much higher than many veteran Canadian media reporters like Chris Zelkovich anticipated:

#CTV ratings down 39% for #SuperBowl. Frankly, I thought it would have been worse. No doubt many watched unaware they could see it on Fox.

An average Canadian audience of 4.47 million is nothing to sneeze at at all. For comparison, November’s Grey Cup (the Canadian Football League’s championship, traditionally one of the other most-watched events in Canada) averaged 3.6 million on TSN, down from 4.1 million the year before, while last year’s Stanley Cup Finals were averaging less than 2 million through the first three games.

The Blue Jays managed to pass 4.47 million a couple of times during last year’s playoffs, including pulling 4.73 million for the ALDS clincher against the Texas Rangers, so this isn’t the biggest audience in Canadian sports, but it’s still up there. That’s impressive, considering that there wasn’t much reason for many to watch the Canadian feed (other than Bell’s “Watch and Win” contest, which ran into technical difficulties); it was the same Fox broadcast, just with lower-budget commercials. Keeping 4.47 million for that isn’t bad.

Of course, this is still a big loss for Bell, especially under the current NFL contract they have. They paid based on one expectation of what the Super Bowl would be ratings-wise, then had that change in the middle of their deal thanks to a regulatory decision, and it’s understandable why they’re upset about that. Getting 4.47 million viewers is nice, but it’s not north of 7 million. They’re also not giving up the battle against the CRTC decision, vowing in a statement to “continue our fight alongside the NFL to reverse it.” We’ll see how that goes.

That Bell statement also painted this decision as “clearly having a direct and negative impact on Canadian viewers, advertisers and the broader broadcasting and creative community,” though, and that’s definitely not clear. For one thing, many Canadian viewers (especially the ones whose repeated complaints to the CRTC motivated this decision in the first place) would argue that giving them the choice of which ads to watch isn’t a negative impact on them at all.

It also wasn’t a negative impact on all advertisers or on the entire broadcasting community. Some new companies may have been able to afford Canadian Super Bowl ads with lower expected audiences, and some Canadian advertisers got clever, buying local ads on Fox stations near the border (and thus boosting those broadcasters):

On Sunday, the Fox affiliate in Buffalo aired an advertisement from Canadian chain Pizza Pizza during the game; the Fox station in Spokane, Wash., sold ads to Leon’s Furniture Ltd. and a group of Canadian Mitsubishi dealers.

…Most of the ads, particularly the most buzzed-about ones, are sold on a national basis by the American network, while a smaller number of spots are available for local affiliates to sell.

“Super Bowl is not just a cost-per-thousand [viewers] buy, it’s such a high-demand product – that really drives the rate,” said Lynn Stryker, national sales manager at Fox 28 in Spokane. The station estimates that it reaches roughly 723,000 households in Calgary and Edmonton – more than in its home market – and so the CRTC’s rule change helped to increase demand for the 13 spots that it had to sell. “I hope they don’t shut it down, for when we have [the Super Bowl TV rights] again in three years.”

Of course, that’s still far from perfect, as no one really knows how many Canadians are watching those feeds (Canadian ratings agency Numeris doesn’t track all Fox local feeds and wouldn’t release the Super Bowl numbers for the ones they do track), and they’re still essentially vanishing from most advertising perspectives. The U.S. advertisers, national and local, are not paying more to Fox for an uncounted number of Canadians tuning in as well. That’s why the NFL’s opposed to this; they’re essentially losing viewers, at least ones that can be tracked and sold to advertisers.

However, it’s notable that some Canadian advertisers still found a way to reach those watching the Fox feeds. It’s also interesting  that some local Fox stations profited (at least from an increased-demand standpoint) as a result. Simsub may be “clearly negative” for Bell (albeit perhaps not to the degree many expected), but it wasn’t negative for all viewers, or for those Fox stations.