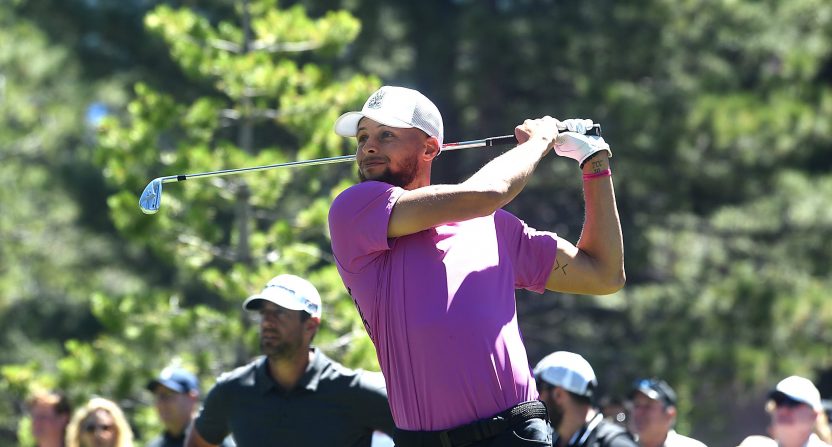 Golden State Warriors star Steph Curry is best known for his skill on the basketball court but he’s going to put his golf knowledge to the test in a new role with NBC Golf’s 2020 Ryder Cup coverage.

As far as NBC’s Ryder Cup coverage, Curry’s role is described as a specialist “insider,” offering “unparalleled insight in playing as a team and winning at the very highest level.” Do with that what you will. The agreement will also include original content that Curry will be involved with for the Golf Channel’s Live From the Ryder Cup and GolfPass.

Also part of the overall deal will be Curry helping to relaunch NBCUniversal’s infamous “The More You Know” PSA campaign, including an interview with John Legend on topics related to diversity, equity, and inclusion.

Steph has a long history and passion for the sport, having played it as much as he played basketball as a kid. His interest in the game was so strong that he’s wondered aloud if the determination that made him an NBA star could have translated into becoming a PGA golfer instead.

“There was always that question,” Curry said. “If I had to put as much time into golf as I did basketball, could I have made it? We’ll never know, but it’s always competed in terms of my attention.”

He’s played in many amateur tournaments over the years. He helped resurrect men’s and women’s golf programs at Howard University. He recently took part in The Match 3 with Charles Barkley, Phil Mickelson, and Peyton Manning. And he’s also a producer on Holey Moley, the extreme mini-golf competition show on ABC. He even told Bleacher Report that he’d never say never to playing golf professionally after his basketball career ends.

“The amount of time you’ve got to put into being a professional golfer, I don’t know if I would ever want to go down that path after my basketball career,” he said. “But you can never say never.”

In the meantime, Curry’s biggest focus, other than trying to win another NBA title, appears to be cementing Unanimous Media as a major player in the entertainment world. Along with this new Comcast NBCUniversal deal, Unanimous is also working with Amazon on documentaries and podcasts, turning Finding Forrester into a TV series on NBC, producing a documentary about Curry with A24, working with Audible on more podcasts, working with John Legend on a sports agent movie, and more.

Sorry LeBron, if Steph can’t beat you on the court, he’s gonna try to beat you with multi-year, first-look development deals.

The Ryder Cup takes place September 21 through 26 at Whistling Straits in Kohler, Wisconsin.