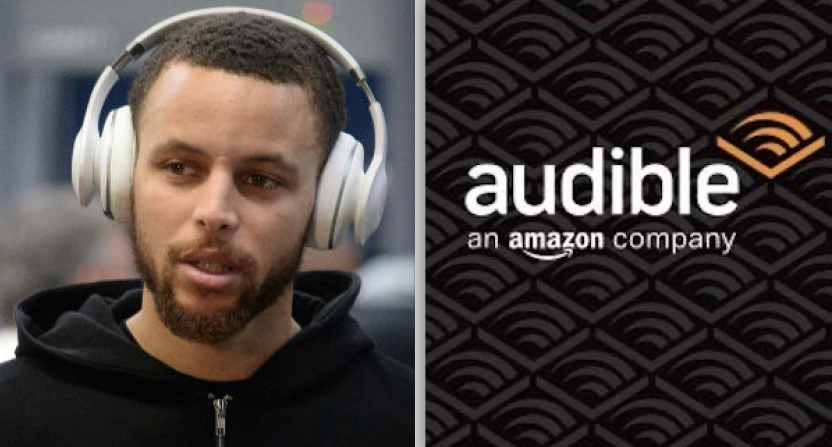 Streaming audiobook platform Audible has been adding podcasts to its catalog in recent months. Sports podcasts are included among that content, but the selection has lacked a brand name to stand out. That’s about to change.

As reported by Deadline’s Peter White, Stephen Curry’s production company Unanimous Media is partnering up on a deal with Audible to produce two podcasts. The first is a documentary-style program titled The Greatest Sports Story Never Told, which intends to look at moments and stories beyond what was already seen and reported, sometimes following athletes off the field.

“Sometimes, you want to know what happened in the dugout in the World Series in 1988 or what happened with Kirk Gibson after he hits that home-run,” Unanimous Media co-founder and chief creative officer Erick Peyton told Deadline. “It’s those little moments in between moments the bigger moments.”

The second podcast will likely be familiar to those who follow Curry online. Fifteen Minutes from Home is an expanded audio version of Curry’s YouTube show, 5 Minutes From Home, in which the Golden State Warriors star rides home from a game with an athlete, entertainer, politician, or fan to discuss a variety of subjects.

Past guests on the YouTube series have included Philadelphia 76ers center Joel Embiid, Olympic swimmer Katie Ledecky, performer Daveed Diggs (Hamilton, Snowpiercer), and rapper E-40. According to Peyton, the audio version will be a bit different, perhaps featuring Curry a bit more in addition to guests invited to the program.

Those who follow Curry on Twitter and YouTube may have seen his “State of Inspiration” interview series, which has included conversations with experts and thought leaders such as Dr. Anthony Fauci, Stacey Abrams, and Bill Gates. Those sorts of interviews could also be included in the Fifteen Minutes From Home series unless the “in-the-car” setting is considered vital to those interactions.

Even with his busy schedule, Dr. Fauci took the time to sit down with me (AGAIN) and talk about what we’ve gotten right and what we’ve gotten wrong. Let’s continue to be positive! #StateOfInspiration pic.twitter.com/Lgul8lgdIr

The deal with Audible adds to the entertainment portfolio Unanimous Media is building. Last year, the production company agreed to a partnership with Sony Pictures to create film, TV, and digital content.

One of the projects announced was a sports agent movie titled Signing Day, with singer-songwriter John Legend also attached as a producer. Unanimous Media is also behind the popular extreme mini-golf show Holey Moley, which will get a third season on ABC next summer.

Though Audible is owned by Amazon, the audiobook platform’s programming is a separate enterprise from what the streaming provider is offering with its podcast initiative. Amazon does intend to include sports podcasts as part of its catalog but is aiming for more local content that can be targeted to particular listeners and markets.

No premiere dates for the two podcasts were mentioned in the announcement, so the shows likely won’t be available for listeners until sometime in 2021.