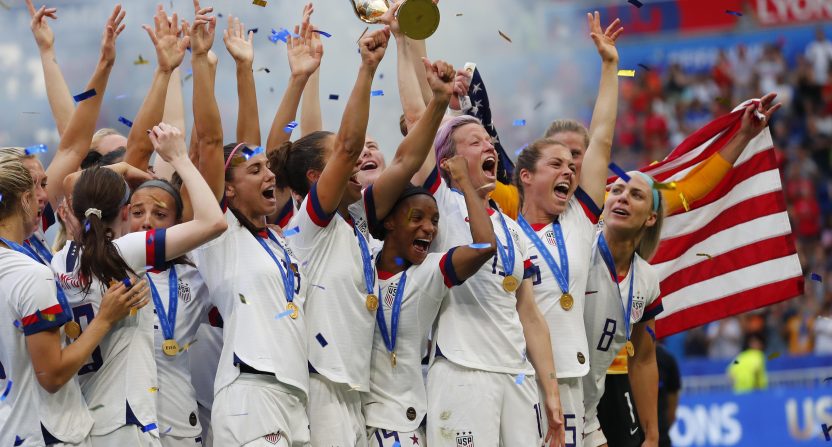 The 2019 FIFA Women’s World Cup is all wrapped up, and the trophy will remain with the United States for the next four years after their 2-0 win over the Netherlands on Sunday. And while Fox is clearly happy with the Final and the tournament as a whole, they’re probably slightly disappointed with the ratings data from Sunday’s victory.

Fox announced that the Final drew a 10.0 overnight rating, a fantastic number that is down 34% from the Final between the US and Japan four years ago in Canada.

I’m sure some people are going to attempt to tie the ratings drop to Megan Rapinoe’s (and frankly, most of the team’s) political comments and stances, but there’s a very simple reason for the ratings drop: it’s the time zone, stupid.

Four years ago, the US-Japan Final took place in primetime at 7 PM on the east coast. This year, the US-Netherlands Final took place in the morning at 11 AM on the east coast. The time zone excuse is often beaten to death when there’s any sort of ratings decline, but an eight hour shift in start time is going to result in a seismic change to viewership.

Fox still has plenty to be happy with in regards to the Final itself. USWNT-Netherlands was up from last summer’s World Cup Final between France and Croatia (which drew an 8.3 overnight). It was the third-most watched Women’s World Cup match ever (behind the Finals in both 2015 and 1999), and drew the fifth-highest overnight for *any* soccer match in the United States (behind the two aforementioned WWC matches and both Brazil-Italy and Brazil-US from the 1994 World Cup, held in the US).

For the tournament as a whole, the minuscule improvement in overnights has to be a disappointment, but again, an understandable outcome for Fox. The network put far more matches on broadcast television this tournament (22, compared to 16 four years ago), and relegated just one to FS2 (compared to seven in 2015). But the time zone factor was a killer: Paulsen at Sports Media Watch notes that no match in this year’s tournament kicked off after 3 PM ET this year. Four years ago, by my count, there were only four matches that kicked off *before* 3 PM ET (and three of those were on weekends).

As for the 2023 tournament, a host will not be announced until next March at the earliest. Of the nine federations that have expressed interest in hosting, four are South American (which would be great news for Fox), one is African, one is Oceanic, and three are Asian (including Australia, which is an Oceanic country in the Asian Football Confederation for competitive purposes). A Women’s World Cup in Australia, New Zealand, Japan, or South Korea would result in even worse time zone issues for Fox, right on the heels the much-maligned Winter World Cup in Qatar in three years.