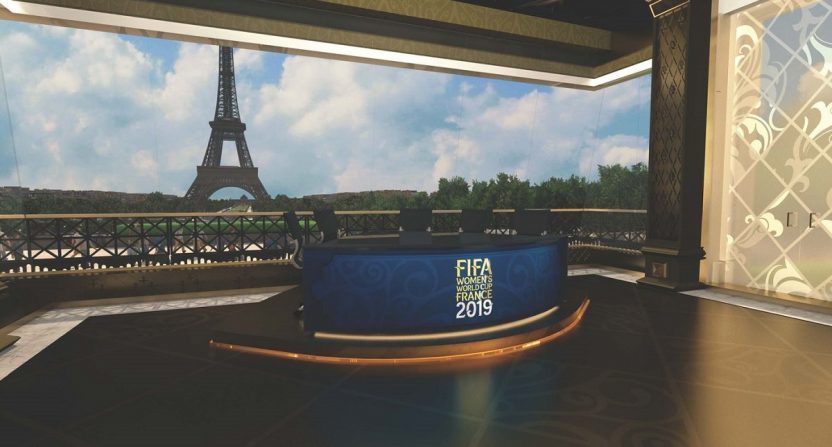 The Women’s World Cup kicks off in just a few months, and Fox has unveiled more of their plans for coverage from France. Perhaps most notably, 22 out of the World Cup’s 52 total matches will air on network Fox, with 27 on FS1 and the remaining three matches on FS2.

Fox also confirmed JP Dellacamera and Aly Wagner as the lead broadcast team, and included a rendering of their studio site overlooking the Eiffel Tower.

Via the Fox Sports release:

All 52 matches air live, including 22 on broadcast television – more than any FIFA Women’s World Cup™ ever – and 27 on FS1. The announcements were made today by David Neal, Executive Producer, of FIFA World Cup™ on FOX and Vice President of Production, FOX Sports.

“In 100 days, one of the biggest moments in global sports will take center stage on FOX Sports,” said Neal. “Given the caliber of the event, we named Aly, a trailblazer in the industry, and renowned announcer JP to lead our expansive coverage. Our programming schedule reflects the scale of the FIFA Women’s World Cup™ and our commitment to it following our unprecedented coverage of the 2015 FIFA Women’s World Cup™ in Canada.”

Dellacamera has covered 14 FIFA World Cups™ (nine men’s, five women’s) on TV and radio, while this summer’s tournament will be Wagner’s third (two women’s, one men’s) as a broadcaster. During last summer’s 2018 FIFA World Cup Russia™, Wagner made U.S. English-language television history as the first woman to call a men’s FIFA World Cup™. The duo will start the Road to France, calling tonight’s USA-Japan SheBelieves Cup matchup at 7:00 PM ET on FS1.

The 22 games on network Fox is a step up from 2015, and it means nearly half of the World Cup will air on broadcast television in the United States. As Jonathan Tannenwald writes in the Philadelphia Inquirer, those broadcast games include all but one United States match, assuming the USWNT makes its traditional deep run in the tournament.

If the U.S. national team wins its group and makes the final, all of their games except one — the Round of 16 contest — are slated to be broadcast on Fox’s network.

Other notable group-stage games on over-the-air Fox include England-Scotland on June 9, Germany-Spain and France-Norway on June 12, Australia-Brazil on June 13, and Netherlands-Canada on June 20. In the knockout rounds, Fox will air two round of 16 games, two quarterfinals, one semifinal, the third-place game and the final. Fox Sports 1 will carry the other contests.

Tannenwald also has more details on the studio setup, which sounds particularly Parisian:

The other big thing Fox unveiled Wednesday — which, not coincidentally, is 100 days until the World Cup kicks off — is its tournament studio site in Paris. It’s a quite glamorous location: a terrace cafe at the Musée de l’Homme, an anthropology museum right across the Seine River from the Eiffel Tower. The museum is also adjacent to the Trocadero Gardens.

Not surprisingly, Fox’s studio will be built so that you’ll see that famous landmark behind the main set during studio programming throughout the tournament. Fox hasn’t said yet whether fans will be able to visit the studio site as they did in downtown Vancouverfour years ago. The cafe is a bit above street level, but it’s close enough to be visible.

While it’s fair to critique execution at times, at this point it’s clear that Fox’s commitment to soccer is beyond question. Last year’s USMNT miss was definitely unfortunate, but not Fox’s fault. Their continued elevation of the Women’s World Cup is both admirable and warranted. Hopefully we get an exciting tournament this summer.