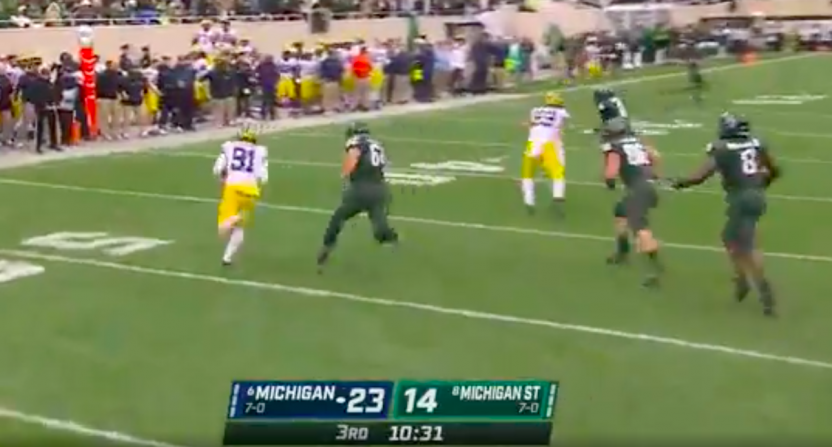 Fox had all the ingredients for an ideal broadcast on Saturday as the No. 6 Michigan Wolverines (7-0) took on the No. 8 Michigan State Spartans (7-0). Gus Johnson was on the call for this Big Ten showdown that would determine which Michigan-based school would challenge Ohio State for the Big Ten East Division crown.

It’s the kind of game where all you need to do is point the cameras at the action on the field and let it tell the story for you. And yet, even that turned into a tough ask for Fox at one of the most critical moments of the game.

Michigan led MSU 23-14 in the third quarter when the Wolverines decided to get a little fancy. On 4th and 6 from Michigan State’s 45-yard-line, Jim Harbaugh called for a fake punt, and punter Brad Robbins attempted to pick up the first down on the ground. When the dust cleared, it looked like Robbins got around five yards, just short of what was needed. Viewers immediately shifted forward in their seats to look at the much-needed replay while Johnson exclaimed “I don’t think he got there…let’s see!” If he was indeed short, this could be the break that MSU needed to get back in this, meaning this was quite the pivotable moment.

And that’s when Fox’s audio feed went quiet, some music faded in, and the broadcast slowly, awkwardly cut to commercial.

It feels like the train was already pulling out of the station to go to commercial before they realized they should have cued up the replay. Very weird. pic.twitter.com/7iAmPj5DHa

To say that viewers were confused and/or angry would be an understatement.

Did FOX really just go to commercial before they determined if the punter got the first down or not, or did I miss the call?

FOX GOES TO COMMERCIAL WITHOUT SAYING WHETHER HE GOT IT ?????

How the hell do you go to commercial without showing a replay first?? Jesus, Fox.

Only a huge momentum turning play there. We have no idea if that was designed or not. But hey… go right to commercial Fox!!!

The fake punt did indeed fail, which viewers eventually did get to see a replay of after the broadcast came back from the commercials. But it left a bad taste in a lot of people’s mouths.  The good news is that the game turned into a real barnburner and so, in that sense, we suppose all is forgiven. But hopefully, someone at Fox looks back at that moment and tries to figure out how to make sure that kind of awkward transition that leaves viewers disappointed and confused doesn’t happen again.