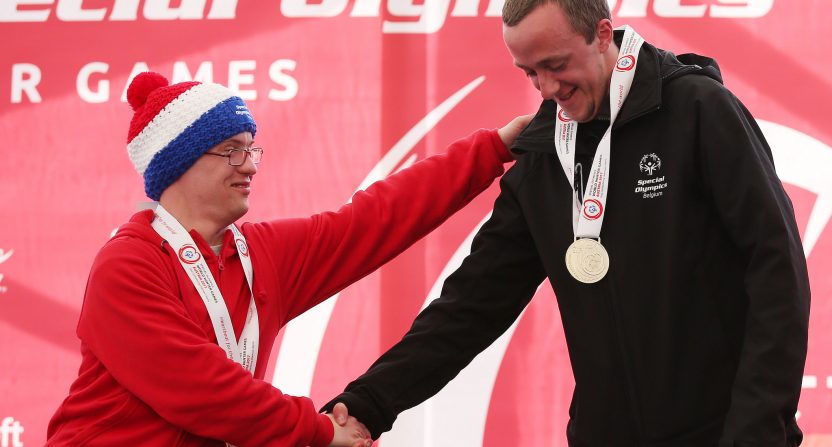 ESPN and politics have not mixed very well in recent years. Sometimes that critique may have been warranted but often it was lobbed as a way for people on one side of an issue to silence opinions on the other side under the guise of calling for fairness. There were plenty of people calling ESPN “too political” over the years, including President Trump. ESPN has done a whole lot to try and get away from the idea that they’re political in any way, with president Jimmy Pitaro going as far as to tell his employees “I do not believe that we’re a political organization.” Much of the talent who drew the ire of the #StickToSports crowd, including Jemele Hill, have moved on and the company has walked a fairly straight line since the NFL season ended.

Which brings us to this week when the political world and the sports world intertwined in a way that made it nearly impossible to go unnoticed by ESPN, as much as they might have tried. News broke earlier in the week on Twitter that Secretary of Education Betsy DeVos had approved a roughly $18 million budget cut set aside for the Special Olympics as part of the President’s 2020 budget.

Betsy DeVos just announced the Department of Education will end all funding for the @SpecialOlympics under @realDonaldTrump's new budget. https://t.co/2TLi7hzW8D

After outrage swept across social media over the decision, DeVos took to the Twitter to defend herself on Wednesday by denouncing the media for distorting the facts before confirming that, yes, she would be cutting all funding for the Special Olympics.

This Administration is focused every day on raising expectations and improving outcomes for students with disabilities. https://t.co/cGhrDY2JEt pic.twitter.com/iC4YFPcIdI

First, SportsCenter anchor Kevin Negandhi spoke about his own experiences with the Special Olympics and the people he’s encountered as part of the ESPN crew.

I’ve been a part of @SpecialOlympics w @espn for the last 5 years.. watching the growth, confidence and true happiness from the athletes and their families has changed my life.. The Movement touches everyone involved.. there are so many stories to share from @worldgamesAD (1)

Malachie Nibiyikora – 16 yrs old
*chained to a pole in a Tanzanian refugee camp for his own protection as a kid
*"brave in the attempt" with 5th and 7th participation ribbons @WorldGamesAD
*once shunned, he’s a hero where he grew up because @SpecialOlympics (3) pic.twitter.com/z1IxwW3fz3

Then, Around The Horn host Tony Reali, who had tweeted out his own thoughts the day before, took some extra time at the end of the show to talk about what it means to include the Special Olympics when we talk about how sports is for everyone.

.@TonyReali with thoughts on @SpecialOlympics and the ways we are all asked to include all people, everyday.

"This is a test for all of us. Do we include all? In what ways can we encourage better? We can't be brave in the fight and win unless we include and encourage all." pic.twitter.com/bg7aWGPiTH

Julie Foudy also discussed the impact of the proposed $18 million budget cut on the Special Olympics in a video on ESPN.com, citing how “soul-crushing” it would be.

It’s still possible the cuts don’t happen and the outcry is certainly going to continue one way or another. But if there’s a line that ESPN personalities were looking for to cross back over into the world of politics, this is the kind of issue that allows them to do so (we hope) without getting any kind of blowback.