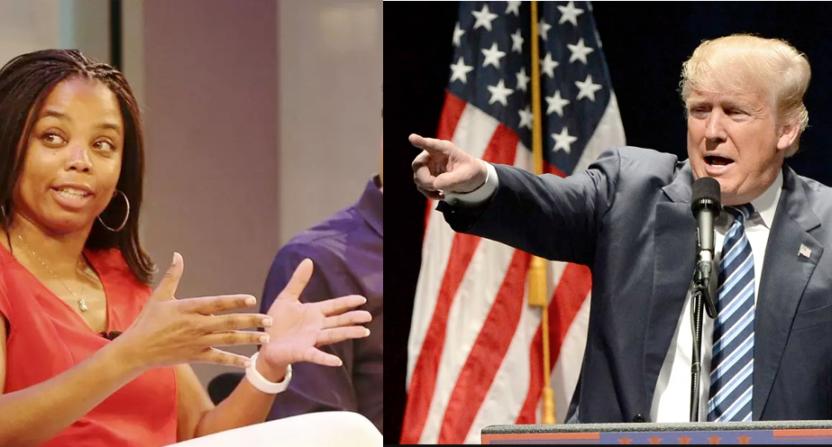 President Trump took to Twitter this morning to chime in on the simmering Jemele Hill controversy that has festered all week. After a flurry of tweets spanning congressional process, terrorism, and his proposed travel ban, Trump capped his morning round of tweets taking direct aim at ESPN.

This has to be a bit of a troubling moment for ESPN with the President further amplifying the growing belief that the sports network’s recent troubles are tied to the network’s perceived political leanings to his nearly 40 million followers. Trump tweeting about Hill’s comments became a plausible scenario after White House Press Secretary Sarah Huckabee Sanders called Hill’s comments “outrageous” and “a fireable offense”. Sanders’ comments seen below came after being asked about Hill by David Nakamura of The Washington Post, who previously worked as a sports reporter.

ESPN has been trying to contain this growing controversy, which is just the latest installment of a series of incidents in which the network has been called into question for what many conservatives believe is a company culture (and perhaps even strategy) that embraces left leaning politics.

Hill’s comments were made on Monday on Twitter and are below.

The height of white privilege is being able to ✌?ignore✌?his white supremacy, because it's of no threat to you. Well, it's a threat to me.

Trump is the most ignorant, offensive president of my lifetime. His rise is a direct result of white supremacy. Period.

No the media doesn't make it a threat. It IS a threat. He has empowered white supremacists (see: Charlottesville).

How is it a "false narrative?" Did he hire and court white supremacists? Answer: YES

You just don't want to believe it because it's too unpleasant. But that doesn't change the facts.

He is unqualified and unfit to be president. He is not a leader. And if he were not white, he never would have been elected

Donald Trump is a bigot. Glad you could live with voting for him. I couldn't, because I cared about more than just myself

I hate a lot of things but not enough to jeopardize my fellow citizens with an unfit, bigoted, incompetent moron. But hey, that's just me.

ESPN issued the following statement on Tuesday hoping it would suffice in helping the controversy to blow over.

This statement didn’t sit well with observers on both sides of the political spectrum as many conservatives believed Hill’s actions warranted a suspension or other disicpline while liberals thought ESPN’s statement was unncessary entirely given the comments were made on her personal Twitter account and that her tweets were not off-base.

But the controversy rolled into Wednesday as Sanders added additional scrutiny to Hill’s tweets and brought more attention from the conservative media eco-system on ESPN’s perceived political leanings. Thursday morning saw Jason Sehorn go onto Fox News where he shared his experience of the network telling him to curb political commentary. This came on the heels of our story on conservatives at ESPN interpreting Hill’s lack of disicpline as a double standard when compared to a non-reported discipline for Linda Cohn when she discussed the effect of politics on ESPN’s business.

The controversy seemed be wrapping up as we headed into the weekend but then Think Progress published a report that ESPN attempted to find replacement hosts for Hill yesterday as the network considered a move to take her off the air. ESPN was firm in denying the report. Given how much her colleagues have rallied around her, such a move to replace Hill (even temporarily) could have potentially incited a talent rebellion against the network and thus it’s not exactly clear what really happened behind the scenes this week.

Fast forward to this morning with Trump’s tweets and we’re now going to be entering our fifth day of this controversy and likely the most intense one. This started as a sports media story with very little awareness about Hill’s comments early this week and has snowballed since. Most ESPN viewers probably wouldn’t even be initially aware of Hill’s comments if they weren’t plugged in on social media.

But now with President Trump explicity calling out ESPN (but not directly Hill which is interesting), Hill’s comments and ESPN’s handling of the matter, it’s only going to bring more attention. Additionally, prior controversies like Curt Schilling’s firing and the Robert Lee-Virginia football assignment will likely now get put under a microscope once again. Trump is known for his fanatical following and there is a long history of his supporters attacking whatever issue the President chooses to shine a lot on through his tweets.

Regardless of where you stand on Hill’s tweets and where you fall in the political spectrum, this could in fact be the loudest and most damaging piece of criticism ESPN has faced to date. The sitting President of the United States has just thrown the entire network under the bus. It’s unprecedented. ESPN already was facing a difficult task combatting the backlash from conservative viewers, but this newest development is assuredly going to intensify those criticisms going forward.

If anything, ESPN can take solace in that Trump has called out many media organizations like CNN, The New York Times, and The Washington Post among many others and those organizations have been able to shake-off those comments and may arguably have benefitted as readers and viewers sided with those companies over Trump. However, ESPN is not a news company and their business is dependent on having a good relationship with sports fans who may be turned off by all of these political stories becoming a dominant presence.

ESPN’s reputation with conservatives was already on thin ice. You can hear the ice cracking in the wake of Trump’s tweet. That said, skepticism remains that viewing habits and ESPN’s numbers are substantively changing due to the growing sentiment among conservatives. Certainly that assumption will be put to the test in the coming weeks and months as offended sports fans will have a tough decision to make if they truly want to boycott ESPN given the strong rights portfolio they have and the lack of options to drop the network without cutting the cord entirely. Whatever the outcome, this development is one ESPN cannot be happy to be dealing with.