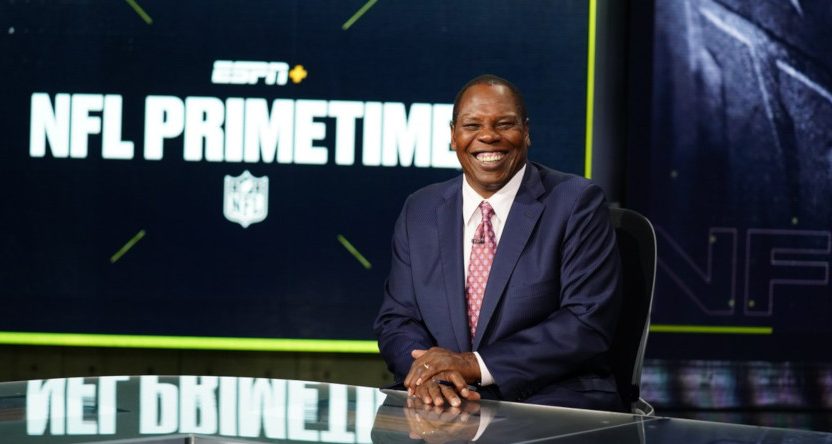 The latest NFL injury report comes from ESPN’s studios. Three weeks into the return of NFL PrimeTime on ESPN+, long-time analyst Tom Jackson will be missing at least a week thanks to an Achilles injury. ESPN NFL analyst Ryan Clark is set to fill in for Jackson alongside Chris Berman. Here’s that tweet from ESPN PR:

"Tom Jackson will miss this week's 'NFL PrimeTime' show on ESPN+ due to an Achilles injury. We wish him a speedy recovery and look forward to his return. Ryan Clark will substitute for TJ this week, alongside Chris Berman." pic.twitter.com/CrCYURqZfS

Hopefully Jackson’s recovery will go well and he’ll be back on PrimeTime soon. In the meantime, the focus will shift to Clark, an ESPN analyst since 2015. He’d better not walk into any cameras this time, or the network’s depth will be really tested.

All kidding aside, though, it’s unfortunate to see this for Jackson, especially as much of the appeal of the new PrimeTime has been how effortlessly he and Berman have reprised the chemistry that made the show’s previous version (which ran from 1987-2005) beloved by many. As AA’s Matt Yoder wrote following the first of this year’s episodes, the new PrimeTime felt just like the old one:

After watching the NFL PrimeTime 2.0 debut, the one thing that stands out is just how amazingly similar the show is to the classic rendition that we all grew up with. Replace the names and uniforms and you’d think it was a show from 1999 and not 2019. I was as big of a fan of NFL PrimeTime as anyone back in the early nineties – the music, the highlights, the nicknames – it all helped to build the foundation for my NFL and sports fandom. PrimeTime on ESPN+ leans hard into that nostalgia that takes you back to a different time in football and fandom.

From the first highlight and the first notes of those trademark PrimeTime theme songs, it’s equal parts a trip down memory lane and a trip through Week 2 highlights. It can’t be just coincidence that PrimeTime started with Ravens-Cardinals so Tom Jackson could get a “Louisville!” in there as the first callback. Berman largely plays the hits and breaks out some new ones like “Mason-Dixon” Rudolph. There were a few minor stumbles throughout the show, but that’s to be expected given how long it’s been since Berman and Jackson have done this together for a full show.

It’s incredible to think that it’s been 13 years since PrimeTime existed in this format with Berman and Jackson. The pairing worked The Blitz on SportsCenter, which was basically inserts of PrimeTime-style highlights, for a decade but it never quite had the same feeling. Could it be that seeing Berman and Jackson together again for a full set of highlights felt…almost fresh? That may sound ironic given some of the criticism towards Berman in his latter years on ESPN for never evolving his style, but the time away from the spotlight and the return to the original PrimeTime format on ESPN+ works here. It’s Berman and Jackson doing what they know and love best. Even the most cynical or critical fan can appreciate that and what the pair contributed to televised sports over the last 30 years. And who knows, there may be younger fans drawn to the game because of these highlights and Berman and Jackson’s chemistry just like so many were 25 years ago.

So hopefully Jackson will be able to recover and return to the show before too long. In the meantime, Clark has some big shoes to fill.