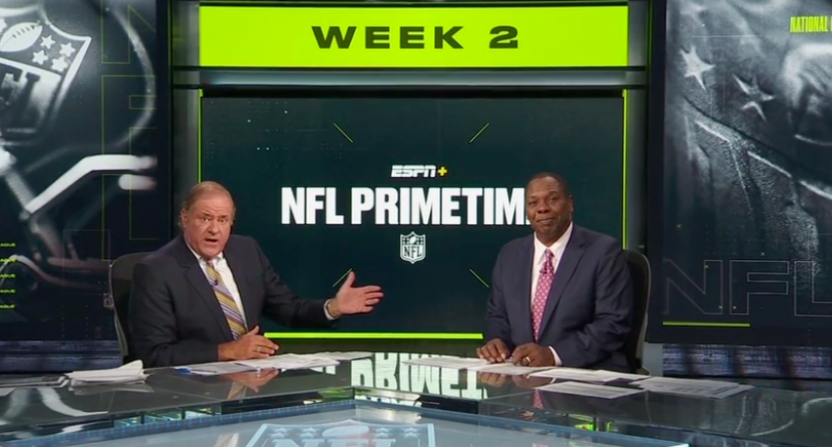 It’s why every other movie coming out of Hollywood is a “live action remake” featuring legacy titles that will pump out a couple hundred million dollars without much effort. It’s why Netflix just forked over who knows how many hundreds of millions for the exclusive streaming rights to Seinfeld. And it’s why ESPN surprised everyone by suddenly bringing back the original version of NFL Primetime with Chris Berman and Tom Jackson, re-debuting in Week 2 of the season and exclusively on ESPN+.

The timing is somewhat peculiar, as the return of Primetime with Berman and Jackson was just announced just last week. Perhaps there was a behind-the-scenes reason why the show wasn’t ready to roll out in Week 1 or didn’t receive more of a promotional blitz from ESPN to attract subscribers to the still relatively new streaming platform.

Nevertheless, it’s another in the long line of triumphant returns to ESPN for the iconic pairing of Berman and Jackson. Berman stepped down from full-time hosting duties after the 2016 NFL season (replaced by Sam Ponder, Trey Wingo, and Suzy Kolber in various roles) and Jackson left the network prior to that season. The pair have made special appearances on ESPN in the past few years since their respective full-time departures, but the return of Primetime to ESPN+ represents a major comeback for both.

And after watching the NFL Primetime 2.0 debut, the one thing that stands out is just how amazingly similar the show is to the classic rendition that we all grew up with. Replace the names and uniforms and you’d think it was a show from 1999 and not 2019. I was as big of a fan of NFL Primetime as anyone back in the early nineties – the music, the highlights, the nicknames – it all helped to build the foundation for my NFL and sports fandom. Primetime on ESPN+ leans hard into that nostalgia that takes you back to a different time in football and fandom.

From the first highlight and the first notes of those trademark Primetime theme songs, it’s equal parts a trip down memory lane and a trip through Week 2 highlights. It can’t be just coincidence that Primetime started with Ravens-Cardinals so Tom Jackson could get a “Louisville!” in there as the first callback. Berman largely plays the hits and breaks out some new ones like “Mason-Dixon” Rudolph. There were a few minor stumbles throughout the show, but that’s to be expected given how long it’s been since Berman and Jackson have done this together for a full show.

It’s incredible to think that it’s been 13 years since Primetime existed in this format with Berman and Jackson. The pairing worked The Blitz on SportsCenter, which was basically inserts of Primetime-style highlights, for a decade but it never quite had the same feeling. Could it be that seeing Berman and Jackson together again for a full set of highlights felt…almost fresh? That may sound ironic given some of the criticism towards Berman in his latter years on ESPN for never evolving his style, but the time away from the spotlight and the return to the original Primetime format on ESPN+ works here. It’s Berman and Jackson doing what they know and love best. Even the most cynical or critical fan can appreciate that and what the pair contributed to televised sports over the last 30 years. And who knows, there may be younger fans drawn to the game because of these highlights and Berman and Jackson’s chemistry just like so many were 25 years ago.

It shouldn’t come as a shock to the ecosystem that your enjoyment of Primetime on ESPN+ will probably depend on how much you want to dip into that well of nostalgia. You won’t hear any hard news or tough stances that reflect on the larger problems that have plagued the NFL over the last several years. Primetime is still just as much a celebration of all things football in 2019 as it was in 1987.

What works for this version of Primetime is that it’s 45 minutes long with no commercials. Having this show on demand is going to be a huge plus for ESPN+, because you can watch at any time Sunday-Wednesday. And as a bonus, watching on Monday night, there was an extra highlight at the end of the show with Scott Van Pelt adding the highlights of the Sunday Night Football game (and if you watch after MNF, Joe Tessitore calls the highlights of that game).

Any time a network has tried to bring back an old-school highlight shows in recent years, it hasn’t worked (see: Fox Sports Live, The Lights, etc). However, ESPN+ is the perfect platform for NFL Primetime or any traditional highlight show in 2019. You can watch what you want, when you want, or even search out the specific highlight that you want. The return of Primetime is a great move for ESPN+, as it will probably bring in new subscribers (especially ahead of the package with Disney+ and Hulu) and celebrates a big part of the network’s history. As Van Pelt said at the end of the program, Berman and Jackson did Primetime from the studio named after themselves.

Primetime on ESPN+ brings together the past, present, and future of televised sports. It’s a remarkable juxtaposition for a highlight show that first debuted in the 80’s to make a comeback in 2019 to a subscription streaming platform. But if Netflix and Chill with Bob Ross is a thing, then maybe anything is possible.