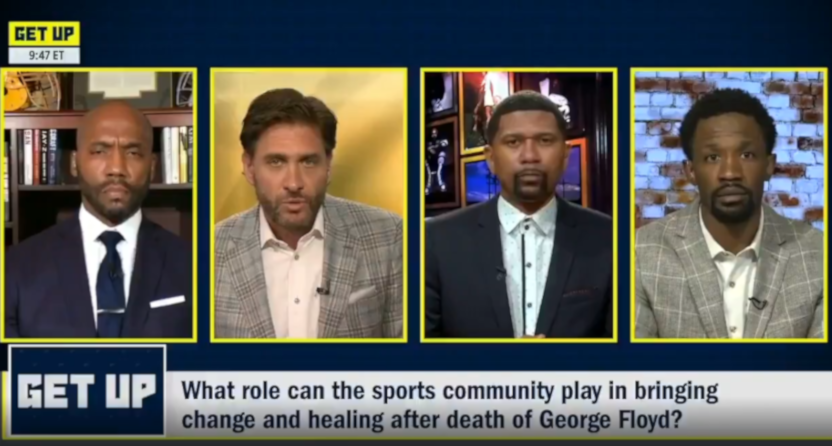 Unarmed black man George Floyd was killed in police custody in Minneapolis Monday, and his death has sparked outrage across the country, including property destruction, protests, and criticism of the actions of police officer Derek Chauvin (who was fired Tuesday and charged with third-degree murder Friday) by everyone from police chiefs to athletes to coaches to entertainers. There have also been actual sports impacts, such as the University of Minnesota saying they will “limit ties” with the Minneapolis Police Department and no longer contract those officers for campus events, including home games. ESPN has been covering the athlete reactions and the sports impacts, while The Undefeated featured a piece from senior writer Lonnae O’Neal on the sisterhood of black mothers, and many other ESPN figures have also weighed in personally, both on the airwaves and on social media (which is something we’ve also seen from figures at many other sports outlets and networks). For example, here’s what Jalen Rose said on Get Up Friday:

Here’s what Dominque Foxworth said on the same show:

Actionable items for pro leagues and teams that want justice for the murder of George Floyd at the hands of the police. pic.twitter.com/3F1QasAN8P

Will Cain and Damien Woody also discussed the situation on Cain’s show:

I don’t find social media is much of a place for convo. But @damienwoody & I STARTED a convo today on George Floyd on @WillCainShow. We’ll continue & go deeper next week. But this is a start & it’s real. What happened in MN is an outrage & injustice:https://t.co/1k7dJwX1ZO

And Bomani Jones discussed this with FS1’s Nick Wright on Jones’ ESPN podcast:

And here are a few of the many other ESPN personnel who have tweeted about the situation:

On vacation. Wanted/needed to relax but I’m just so pissed off watching what happened to George Floyd. To ask “when does this stop” just seems like a waste of time right now. Let’s see what happens to the Police Officer who did this. We need to all lock in on this.

If you don’t understand the killing of George Floyd is the product of centuries-old systemic wrongs–if you’re somehow uneasy about the protests–that’s on you. You haven’t tried. You haven’t thought beyond your own experiences and privilege. Change requires empathy and action. https://t.co/M0ciAuqTj8

I stayed off Social media because im out of character angry!! But y’all read this please thank you @LonnaeONeal https://t.co/qTs3SGBsY1

This. Every black man of a certain age that I know has a story to tell about being stopped by police. @LZGranderson w/a must-read column.https://t.co/QXwYgeD6Wu

One of the most powerful essays I have ever read on any subject. @LonnaeONeal on George Floyd, from a black mother’s perspective. @TheUndefeated #GeorgeFloyd https://t.co/aQATP3IHL1

Even ESPN NFL reporter Adam Schefter, he of the infamous “Sports figures who publicize their political viewpoints only serve to divide the audience” comments in 2016, tweeted about Chauvin’s arrest Friday, and he has also retweeted comments from Lowe and others. So that helps illustrate how widespread the discussion has become here. This also received further commentary when it came to the on-air arrest of black CNN reporter Omar Jimenez; even avowedly non-political figure Mike Greenberg retweeted a Medill (Northwestern University’s journalism school) statement condemning that arrest (both Greenberg and Jimenez are Medill alums), and other ESPN employees like Michael Wilbon and Kimberley Martin weighed in as well:

Damn proud of Omar Jimenez of CNN and the professionalism he and his crew displayed under absurd and unnecessary pressure in Minnesota this morning. Feels increasingly and frighteningly like the 1960s in the Jim Crow south. Are water hoses, dogs and rope next?

CNN reporter Omar Jimenez, who was arrested by police in Minneapolis and later released, is back on air.

One thing he said earlier that struck me so deep: “I am thankful that it happened on live TV, so that you were able to see it…so there’s no doubt as to what happened.”

And some particularly notable tweets came from Emmanuel Acho, an ESPN analyst for the moment but someone who’s reportedly headed to FS1. Acho has not only weighed in on the situation as a whole, but on President Donald Trump’s tweets about shooting looters:

To my colleagues, sports analyst, insiders & reporters that have chosen to stay silent because these racial matters are not, “on brand” or “sports related”.

Please remember, you were human long before you were involved in sports.

Trumps quote: “When the Looting starts, the shooting starts” is not forecasting violence BY rioters. It is a direct order to kill!

The quote originated in 1967 by Miami Police chief, Walter Headley who ordered his department to shoot “young hoodlums” pic.twitter.com/ypBGPaLJqR

To my white friends I’m going to be honest & blunt.

If y’all aren’t vocalizing the injustice going on right now, PLEASE be calling & checking on your black friends. We notice.

When & if the dust settles, hearts may grow cold, and friendships may not be there.

So, there are unquestionably a lot of ESPN employees weighing in on this. And yes, there are some people yelling “stick to sports” at them in their mentions. But there are a few things that differentiate this from some past ESPN controversies. For one, while ESPN president Jimmy Pitaro has frequently said the network is “not a political organization” and he and Bob Iger (the Disney CEO back then, and the current Disney executive chairman) both agreed “the pendulum had swung a little bit too far away from the field” under the leadership of previous ESPN president John Skipper, Pitaro has also said things like “There is going to continue to be an intersection of between sports and politics and we’re going to continue to cover that.” And with the amount of athletes weighing in on this and with actual sports news coming out of this, this is clearly in that “intersection,” and it would be very difficult for ESPN to ignore this entirely.

And the decision to have on-air segments on this on programs like Get Up definitely feels like an indication that ESPN management is fine addressing at least the sports implications of this situation, at least in that forum. This is not a case of Dan Le Batard talking about something that’s on his mind and then winding up with meetings with Pitaro (but no suspension) afterwards. It’s also notable that Le Batard’s comments were about the remarks of the crowd at one political rally (held by Trump) about another politician (Democratic congresswoman Ilhan Omar); while the Floyd killing and its aftermath has seen politicians weigh in, the issue at the heart of it is not specifically about political officeholders or candidates, and many have said before there’s a distinction between discussing racial issues and discussing politics.

Thus, while some of “stick to sports” people undoubtedly consider this ESPN dipping into “politics” and are mad about that, it’s far from universally agreed that that’s what’s going on here. And that’s especially true with the sports-angle focus the on-air segments have had. (Of course, the attempts to draw rigid “sports” and “not sports” lines is flawed in the first place, but that’s a different debate.) And those on-air segments showing up, especially on Get Up, suggest that they’re just fine by Pitaro’s stated policies, and it’s worth noting that the explicit comments there have never been “no politics”; they’ve been “We’re not a political organization, but we’ll cover the intersection of sports and politics.” And the on-air content at least seems to fall within Pitaro’s definition of that intersection.

The social media comments are maybe a bit different, and they’re one area where those looking to go after ESPN for breaking its own policies might have some more ammunition, but there’s important context to consider there. For one, the network’s much-cited “new social media policy” came out in November 2017 while Skipper was still in charge, and it’s never really been fully enforced (just like their previous ones). And for another, those rules don’t actually say what many claim they do. The specific line there is “Writers, reporters, producers and editors directly involved in “hard” news reporting, investigative or enterprise assignments and related coverage should refrain in any public-facing forum from taking positions on political or social issues, candidates or office holders,” and while that absolutely is not fully followed, it does not apply to most of the ESPN personalities quoted above. Most of them are commentators. And here’s what that policy says about commentators:

+ The subject matter should merit our audience’s interests, and be worthy of our time, space and resources; we should be in position to discuss the issue with authority and be factually accurate.
+ The topic should be related to a current issue impacting sports, unless otherwise approved by senior editorial management. This condition may vary for content appearing on platforms with broader editorial missions – such as The Undefeated, FiveThirtyEight and espnW.
+ Commentaries on relevant sports-related issues are appropriate, but we should refrain from overt partisanship or endorsement of particular candidates, politicians or political parties.
+ The presentation should be thoughtful and respectful. We should offer balance or recognize opposing views, as warranted. We should avoid personal attacks and inflammatory rhetoric.
+ Communication with producers and editors must take place prior to commentary on any political or social issues to manage volume and ensure a fair and effective presentation.

The main probably isn’t explicitly being followed here is the “communication with producers and editors” (it seems likely that ESPN talent are not running all these tweets by management), but that isn’t provable from the outside, and that was an absurd line to draw in the first place.  It is also notable that that policy had Merida as its primary author, and that Merida is one of the people discussing this above. And it’s also possible that ESPN producers and editors did send out guidelines for social media commentary on this specific issue, and that the people involved are following them.

But even if there wasn’t “communication with producers and editors,” any attempt to discipline ESPN employees for these comments would be not reading the room in an incredible way. For one thing, there are people at a lot of other networks weighing in on this as well (including Fox Sports, NFL Network, and more), and for another, countless athletes, coaches, entertainers and more are commenting on it. Any attempt to stop ESPN talent from discussing this or punish them for their discussions of it would draw much more attention than what they’re doing at the moment, and it would probably backfire significantly. So while there may be some people yelling at these ESPN commentators on Twitter, it’s unlikely the discussion here will go away.