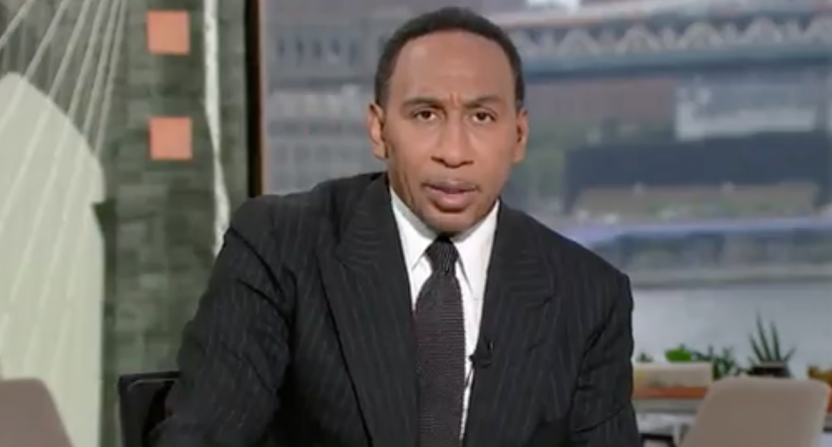 How would Stephen A. Smith follow up his remarks about Los Angeles Angels star Shohei Ohtani, comments many fans and media viewed as xenophobic?

The ESPN personality apologized with a Twitter video and text graphic after outrage over his opinions circulated on social media. But Smith’s initial commentary was on TV, on ESPN’s First Take, which reaches a wider audience and a viewership that may not have seen those apologies online. So Tuesday’s edition of the show began by confronting the issue that needed to be addressed before any other sports subject could be discussed.

“Let me be the first to stand up and say that I want to express my sincere apologies to the Asian community and Asian American community,” said Smith, making it clear that he didn’t want to hide behind press releases or statements and wasn’t forced into his apology by ESPN.

Stephen A. Smith addresses his previous statement about Shohei Ohtani not being ideal for the promotion of the MLB because he speaks through an interpreter. (Via @FirstTake) pic.twitter.com/V3hmekppw7

“I am a Black man. I religiously go off about minorities being marginalized in this nation. I instantly go off, repeatedly bring up the fact that if you are a member of a community that feels disenfranchised in any way, that’s something we need to battle, that we need to fend off to the best of our ability as a nation.

These are the kind of things that I bring up and the reason I bring up my Blackness is because of this: On many occasions, when I have said, when people have said something that is offensive in any way to the minority community, it’s not about how you feel. It’s about how they feel. And the reality of the situation is that you have Asians and Asian Americans out there that obviously were very, very offended by what I had to say yesterday. And I just want to look into the camera and extend my sincere apologies. That was not my intent at all. ”

Smith went on to apologize to Ohtani in addition to expressing regret for remarks he made about the Nigerian national basketball team, also on Monday’s show.

ESPN’s Jeff Passan tweeted on Monday that he would appear on First Take to respond to Smith’s comments, which teased a potentially contentious confrontation between the two. But Smith’s apology dampened that. However, Passan still advocated for Ohtani, explaining what he left behind by coming to the United States to play Major League Baseball, stating that he’s the sort of figure that deserves admiration and support, and asserting that ESPN and its platforms should do better.

"He is the sort of person who this show, who this network, who this country should embrace. We are not the ones who should be trafficking in ignorance."

Passan and Smith (along with co-host Max Kellerman, who defended Smith by saying he was not racist) then engaged in a dialogue regarding Ohtani’s role in providing baseball content to discuss beyond recent scandals that have made headlines. Something that should make MLB hopeful is Passan sharing that his son’s two favorite players are Ohtani and San Diego Padres shortstop Fernando Tatis Jr., international stars who capture fans’ awe and imagination, selling the sport better than anything either player could say in an interview.

Altogether, First Take devoted the first 20 minutes (and a significant part of the first hour) of Tuesday’s show to this discussion. While the conversation eventually digressed to MLB’s shortcomings in promoting its stars and the overall sport, with Passan arguing that more talk about baseball encourages fans to watch the game, the dialogue turned back to the issue of Smith’s remarks and Ohtani’s impact.

Following a segment devoted to USA Basketball’s loss to Australia, Passan’s fellow ESPN baseball writer Joon Lee joined the program to resume the discussion on the outrage over Smith’s comments regarding an Asian player and how they were received by Asian and Asian American fans and media.

First Take was wise to give @joonlee a very sizable chunk of time uninterrupted to give his perspective. He’s done a great job. SAS has largely just listened (a rarity). Came off a bit more sincere in this segment than the earlier on. pic.twitter.com/uwxpGborhE

Like Passan, Lee asserted that ESPN (and other sports media outlets) have an opportunity and obligation to inform, to educate the audience, rather than constantly pontificate. Especially amid an epidemic of violence toward people of Asian and Pacific Islander heritage during the past 18 months.

“So much of the Western media, American media, us at ESPN, are so unprepared to talk about Asian Americans in a nuanced way that speaks authentically to our experience in this country,” said Lee, who was born in South Korea and raised in Massachusetts.

“Some of that falls on us in needing to speak up about what it’s like to be Asian American. But it also falls upon the institution, on ESPN, on other media outlets covering the Asian American community to know about the generational history, the general trauma in this country.”

Joon also referenced Vincent Chin, a Chinese American who was beaten to death in 1982 by two white men who believed him to be Japanese and blamed him for Japan’s auto industry taking away jobs from American auto workers, in addition to Japanese American internment camps during World War II, and how that history influences how Asian Americans are perceived and feel living in the United States.

Hopping on @FirstTake today to talk about Shohei Ohtani, the perpetual foreigner stereotype and the roots of the reaction from the Asian-American community yesterday https://t.co/7VOHJmgBkS

The overall message of Tuesday’s First Take opening was “Do better.” Smith’s apology was a surprise from what we’ve seen from sports media and political pundits in recent years, who double down on offensive remarks and seemingly feel no need to express remorse or regret. And Passan and Lee imploring ESPN and other outlets to act more responsibly with their platforms is a message of which they need to be reminded constantly.

Whether or not those outlets — and Smith as a high-profile pundit — take that to heart and act accordingly remains to be seen.