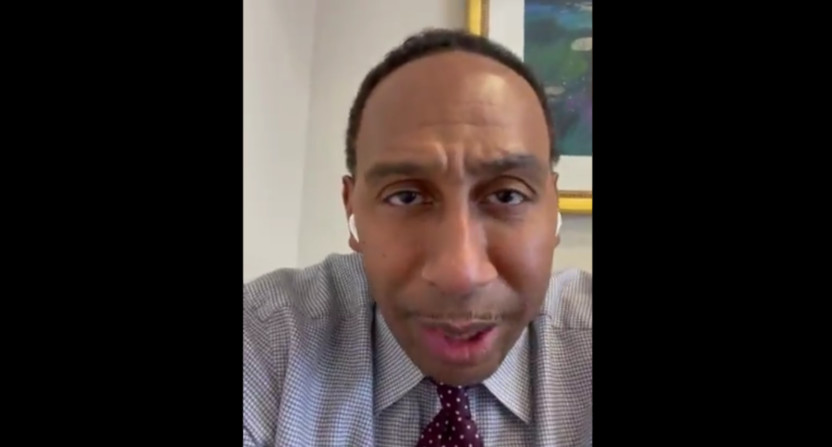 People occasionally say problematic things on live sports television, and that leads to backlash, apologies, and sometimes consequences. In the case of Stephen A. Smith’s widely-blasted criticisms on ESPN’s First Take Monday that Shohei Ohtani tends to only answer English questions through an interpreter, though, it initially only led to one. Smith took incredible Twitter backlash on those comments, including “I don’t think it helps that the number one face is a dude that needs an interpreter so you can understand what the hell he’s saying in this country.”

The criticisms for Smith there came from journalists, sports fans, and more. But the only response from him or ESPN as of 6 p.m. Eastern was a video posted to Smith’s personal account (and not retweeted by First Take, or by any other ESPN account) where he didn’t use the words “apology” or “sorry.” Instead, he  claimed critics were misinterpreting him, then restated his “point” that Ohtani’s interpreter usage is somehow hurting MLB in the U.S. without adding evidence to support that. (Update: Smith did later post a text apology statement. We’ll get to that in a minute, after we get through his first video “clarification.”)

On my earlier comments about Ohtani pic.twitter.com/FM0vnDDXBB

Here’s a full transcription of that video:

“My segment on Ohtani this morning on First Take, people are misinterpreting what I’m saying. I’m not talking about the state of the game, baseball itself. Baseball’s a great game, a great sport, and some of the greatest players in the world are foreign players. Tatís [San Diego Padres’ shortstop Fernando Tatís Jr., who is from the Dominican Republic] comes to my mind, I love this brother and what he brings to the table. And Ohtani is the second coming of Babe Ruth, okay? That’s not what I was trying to say, I’m talking about the marketability and the promotion of the sport.”

“It’s exactly what Sports Illustrated alluded to in their article last month when they talked about 28 percent of the players in Major League Baseball are foreign players, a lot of them need translators. You know, Spanish, it could be Mandarin, Japanese, the list goes on and on. If you are a sport trying to ingratiate yourself with the American public the way Major League Baseball is, because of the problems that you’ve been having to deal with, improving the attractiveness of the sport, it helps if you spoke the English language. It doesn’t mean anything more than that.”

“Baseball is a great game. But baseball’s audience is significantly older than the NBA, the NFL audience, etc, etc. That’s what I’m talking about, nothing more. We’re only talking about Ohtani because he’s phenomenal. He’s in the Home Run Derby, he’s got 33 home runs with a .279 batting average, plus he can pitch, he’s the second coming of Babe Ruth. Practically. We know that it’s an international sport, we know that it’s great, and baseball having the global appeal that it does, fine. But in the United States, all I was saying is that when you’re a superstar, if you can speak the English language, then guess what? That’s going to make it that much easier and less challenging to promote the sport. That’s all I was saying. About anybody. Later.”

Update: And here’s that text apology:

Smith’s initial non-apology “clarification” had a lot of similarities to the non-apology offered by Smith’s former First Take co-host Skip Bayless following his Undisputed comments in September 2020 bashing Dallas Cowboys’ quarterback Dak Prescott, which came in response to Prescott publicly revealing that he struggled with depression following his brother’s suicide. After that, Fox Sports put out an unsigned statement saying “We do not agree with Skip Bayless’ opinion on Undisputed this morning. We have addressed the significance of the matter with Skip and and how his insensitive comments were received internally by people and Fox Sports and by our audience.”

But Bayless offered only a “sorry if you were offended” apology on Undisputed the next day, and that didn’t stop Fox from deciding to resign him anyways (despite all their comments about becoming “a more mature network“). And Smith seemed to be taking a similar approach here with his first statement (maybe even more so, without any sort of “sorry”,), and it seems likely that ESPN will apply similar non-punishment. Update: It is notable that this has now escalated to an actual apology, and it’s worth wondering if there was some ESPN management prompting there.

This isn’t getting as much runway as the Ohtani comments, but it’s also xenophobic and disrespectful. It’s not hard to learn guys’ names.

And there are so many other ways you can take a convo about USA losing to Nigeria than commenting on their names. https://t.co/74ibPs0Ykm

Even the official Nigerian men’s basketball account dunked on that:

A one minute clip with no basketball analysis and pure disrespect to the names of our culture.

Do better please @stephenasmith. This is low, even for you. https://t.co/H6m69KCwL2

On some levels, it’s understandable why ESPN doesn’t weigh in against Smith the way they do against others at the network who cross a line. It’s clear at this point that ESPN values Smith more than anyone else at their company, with his 2019 contract extension making him the highest-paid personality there (a figure recently reported as $12 million annually in total compensation by Richard Deitsch of The Athletic) and confirming their investment in his debate approach. And that fits in with the general punishment inconsistency we’ve seen at ESPN, something we’ve discussed with particular reference to Smith way back in 2014.

One thing that’s notable about the Smith situation that we didn’t see as much with Bayless is the current coworkers seemingly calling Smith out. One of those would be Mina Kimes:

Gonna go ahead and say this translates in any language https://t.co/iOtHJwa2LC

Another notable one is Joon Lee:

Telling anyone — let alone a generational, one-in-a-lifetime baseball talent who's currently doing something completely unprecedented — to just "learn English" completely underestimates and devalues the difficulty of immigrating to the United States

And Passan, quoted there, said he’ll be sharing his own thoughts on this on First Take Tuesday, and he certainly seems ready to push back at Smith:

I’ll be on First Take tomorrow morning to talk about Shohei Ohtani.

I’ve got some things to say.

So that will certainly be an interesting watch. But beyond that, it sure seems like there isn’t a whole lot of consequence here for Smith. Even now that he has offered more of an actual apology.