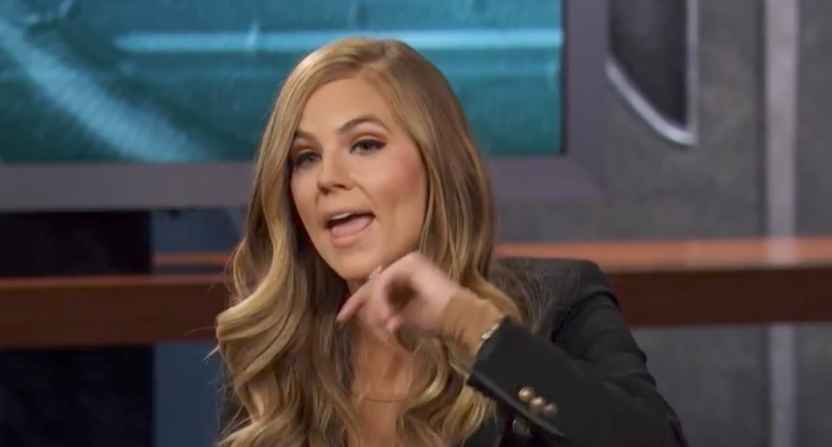 We’re a little over 24 hours away from ESPN2 airing the first installment of Barstool Van Talk, and we’re already seeing some chafing between the two strange bedfellows as Sam Ponder took to Twitter dredging up past incidents of objectionable comments made by Barstool talent aimed at her.

Welcome to the ESPN family @BarstoolBigCat (& welcome to all ur minions who will respond to this so kindly) pic.twitter.com/AzgfdDx2FK

Ponder directed the tweet at Dan “Big Cat” Katz, who will be one of the two featured personalities on Van Talk, along with PFT Commenter. Ponder, vocalizing her frustrations, is certainly understandable given the history. What will likely work against Ponder’s desire to draw scrutiny to Barstool’s more controversial content over the years is the fact that Katz did not write the article Ponder screenshotted. The article Ponder tweeted was authored by John Feitelberg who goes by “Feitsbarstool.” You can imagine both ESPN and Barstool aren’t too keen on Feitelberg’s article being recirculated by a high profile personality more than three years after its original publishing.

Editors Note – I know Feits blogged this already.  But I wrote it up too because I’m fired the fuck up. FUCK SAM PONDER THAT BIBLE THUMPING FREAK

So it’s official. Sam Ponder is an idiot. I mean this tweet from her is not only infuriating but mindbogglingly stupid. Hey Sam you really can’t see the difference between saying a chick is hot and beating the fuck out of a woman? You don’t see the difference? Like guys can’t look at girls in bikinis or talk about sex without thinking it’s okay to knock them unconscious? Please tell me you’re not this dumb. Seriously you sound like a KO Barstool freak, not a chick that has a job where  the #1 requirement is you make men hard. So give it a rest with your righteous indignation. Your entire career and livelihood is based on appealing to guys like me and blogs like ours. Bottomline is guys thinking chicks are hot is natural. It’s Darwinism. It’s never gonna change. But that doesn’t mean we don’t respect women and think it’s okay to hit a woman. I have no idea what’s so confusing about that. Go fuck yourself.

Those are the type of comments that a Barstool Sports detractor will point to as a reason why ESPN should not be partnering with the edgy content brand. On the flip side, the tribal readership of Barstool Sports would likely counter that it’s these types of comments that make Barstool special and they don’t want that unique voice being diluted just so the company can have a TV presence.

A reader pointed out that Katz did not in fact write the comments Ponder showcased although it’s unclear who exactly penned the editor’s note. Katz responded saying he didn’t write the post and claimed that he understood Ponder’s point.

Should I save the “rundown” where you call me a slut for later or use that one now?

OHH it was your boss?! ?? And to ur tweet 2nite that I can’t find now,? I’m not mad I’m just shocked. Maybe relisten to the “rundown”?

Hey Sam, thanks for the welcome. I just want to clear one thing up, I didn't write this blog post (you make it seem like I did) and the rundown you reference I actually defended you.

Yeah I did just re listen to the rundown. I said I understood your point at the time…

What happened to your first tweet? ?Also, I see that y’all already removed the rundown. The transcript still exists though. Have a nice night.

I honestly think you have me confused for my boss Dave here. Have a nice night as well

We actually covered Ponder’s original dustup with Barstool back in 2014, which led to the always colorful Barstool Sports President Dave Portnoy writing a retort titled “Some Absolute Idiot Is Saying Sam Ponder’s Twitter Feed Proves Her Point That Guys Who Objectify Women Don’t Have The Right To Complain About Beating Women Or Something.”

Although Katz didn’t seem to offer a comment on Ponder back in 2014, he did chime in by saying ESPN picking Ponder to replace Chris Berman as Sunday NFL Countdown host was “the worst choice possible,” citing her serious demeanor as not a good fit to replace Berman.

This is one of many mini controversies to pop-up for Barstool since we initially reported on their ESPN partnership two weeks ago. In fact, I just checked Portnoy’s Twitter feed to see if he had opted to address this newest story only to find he’s threatening to sue Deadspin for defamation for their coverage about some distasteful comments he made earlier in the day.

The reality is Barstool’s actions, past and present, are under a much larger microscope given the brand’s trajectory, prominence, and transition to traditional platforms. Those who feel Barstool’s past transgressions should disqualify them from partnerships like working with ESPN and other opportunities to crossover to a larger mainstream audience, have a lot of low hanging fruit to pick from in terms of spotlighting past incidents that reflect badly on the brand. Does Barstool’s core audience care? Not at all, and in fact spotlighting these things may even only further the loyalty between Barstool and their fans. But it’s still a pretty bad look for those becoming familiar with the brand as well as the folks at ESPN and Barstool, who have to really take ownership on this collaboration.

Ponder certainly didn’t help herself by calling out the wrong Barstool personality and while ESPN is probably unhappy that she assertively called out a new content partner at a critical time, there is absolutely zero chance they can do anything about it, given just how crude the original comments were regardless of who made them. As always with any controversy involving Barstool Sports on social media, it’s more or less like kicking over a hornet’s nest for a few days before people move onto something else. I’ll probably get stung a few times just for writing this not overly opinionated article.

At the end of the day, this is really just another datapoint on the tight rope Barstool Sports will have to walk to continue the trajectory they are on. Their large and growing audience craves the candid and controversial remarks the brand and their personalities make, but can Barstool retain that ethos while in search of mainstream partners, platforms, and advertisers? The answer to that question is probably one of the five biggest questions in sports media heading into 2018.