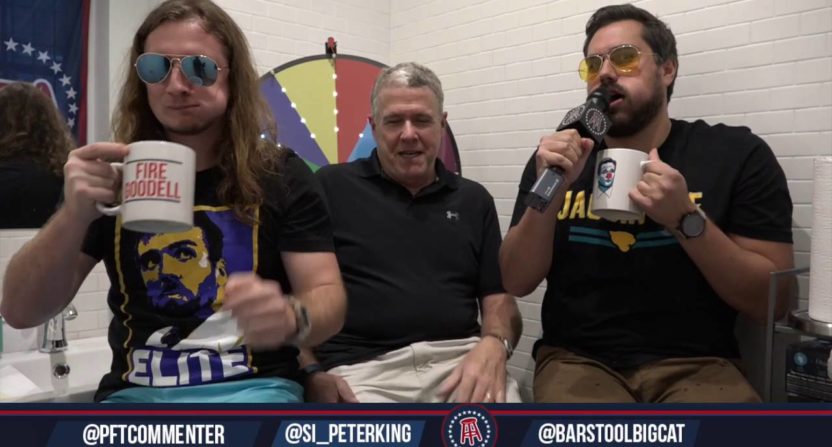 Update: After briefly giving us a heart attack with this tweet, Barstool President, Dave Portnoy seemed to acknowledge our report

There is no PMT show on ESPN. Anybody who reported that is dead wrong. And they will be dead wrong tomorrow and a year from now. https://t.co/A85IqrNq4w

I didn't say anything about ESPN 2

Awful Announcing has learned that Barstool Sports is close to a deal with ESPN that would see the popular podcast, Pardon My Take, launch a weekly late night show that would air on ESPN2. We’re told an announcement may come as early as tomorrow, although some details are still being worked out. Some in Bristol thought an announcement would come today, but reportedly there are still some details being finalized, and perhaps ESPN wanted to space this announcement a bit from today’s earlier news that Katie Nolan was joining the network.

The weekly program would air from now until the Super Bowl. It’s believed the television show would not affect the podcast, which would continue on as normal. It’s unclear what night and how long the episodes would be, but we’re told it would definitely air on ESPN2 and at a late night/early morning hour.

The pending collaboration can’t be undersold as a major win for Barstool. It was only 18 months ago that in the show’s infancy Pardon My Take was on the receiving end of a cease and desist from ESPN who contended the show’s logo and name infringed on the trademarks of Pardon The Interruption and First Take. Barstool didn’t blink, and, if anything, ESPN’s legal objection only further accelerated the show’s growth. Our Jim Weber chronicled the show’s rise to prominence back in June, and at that point in time, the show was averaging around a million listeners per episode.

By February last year, the relationship between Barstool and ESPN seemed to thaw as Pardon My Take‘s two hosts PFTCommenter and Dan “Big Cat” Katz were invited to SVP’s SportsCenter.

The pair have increasingly become favorites of a lot of prominent on air personalities at ESPN and mostly have avoided major controversies, something that Barstool and its president Dave Portnoy have struggled at times to do. With that in mind, Pardon My Take was probably the best fit for television for Barstool, which has been the source of much conjecture since Comedy Central had a successful run airing The Barstool Rundown during this past Super Bowl week.  As recently as June, there were reports that Barstool was having conversations with FS1.

According to Burns and multiple sources, Barstool has been shopping a late-night show around to networks, including FS1. It’s unknown of discussions with Fox Sports are still ongoing or if they died down. Regardless, those conversations are an indication of Barstool’s ambition to take on TV next, something [Barstool CEO Erika] Nardini and Barstool founder Dave Portnoy confirmed.

When asked about where the brand conversation currently stood for linear, Nardini declined to comment but did say, “We’re interested in having a linear show. I think a question for us is which one of our brands should be a linear show.

“We have a ton of aspiration around radio, social and on television. I think you’ll see us explore all three of those things going forward.”

With ESPN2 primarily airing reruns at night and Pardon My Take‘s massive built-in audience, this seems like a great partnership for both sides. On the heels of Katie Nolan landing at ESPN after FS1 failed to utilize her in any meaningful way, ESPN winning out over FS1 to bring Pardon My Take to television seems like another setback for FS1 as they continue to struggle to find ratings and relevancy.

We’ll certainly be interested to find out more details on the show and particularly how Barstool announces the news, given their flair for major announcements. Until then, I’m hoping other outlets covering this story will follow the lead of Big Cat and PFT Commenter and be sure to “respect the biz.”