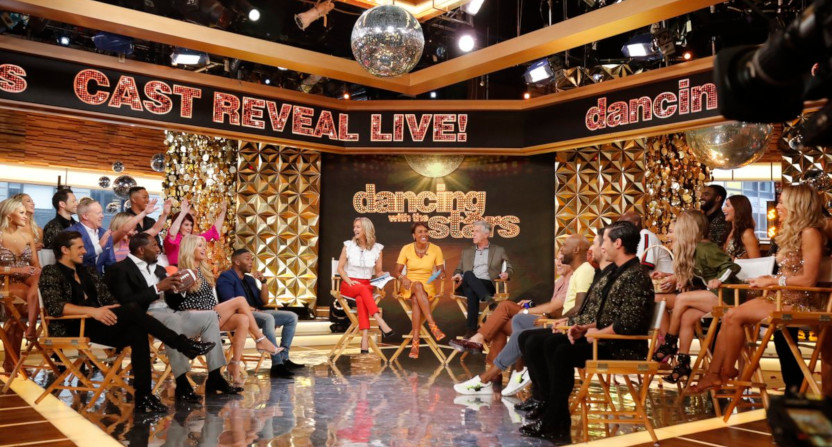 The cast is out for this year’s edition of ABC’s Dancing With The Stars (somehow in its 28th season), and while much of the talk has been about its inclusions of former White House press secretary Sean Spicer and actor James Van Der Beek (the latter fulfilling a prediction ABC sitcom Don’t Trust The B—- In Apartment 23 made in 2012), there are also some sports figures involved (as is usual for the series). This time, one of them is a former ESPN analyst, and one’s dating a controversial former ESPN radio contributor.

The first figure there is Ray Lewis, also known for his NFL career, for the time he was charged with two counts of murder, and for his work for ESPN (2013-16) and Fox (2017 to present). It’s certainly interesting to see him wind up here not during his ESPN stint, but rather now that he works for a rival sports media company. But the other sports figure here is Lamar Odom, and he’s maybe even more notable.

Odom, of course, is a former NBA player more recently known for his past marriage to Khloe Kardashian (which ran from 2009-16). He’s also known for the 2015 incident where he was found unconscious at a Vegas brothel after extensive drug use. And really, the most amazing thing about him may be his new relationship with “health and life coach” Sabrina Parr.

Yes, that’s the same Sabrina Parr who lost a recurring commentary gig on ESPN 850 Cleveland in 2017 after claiming sans proof that Jabrill Peppers “was on the lean and the molly,” something that went too far for even that station. Sadly, the YouTube video of her “lean and the molly” rant is no longer available, thanks to the station yanking it down with a copyright claim (they only allow access to their archives with paid subscriptions). But it’s worth reprising what we wrote about Parr at the time of those remarks:

Parr is a long-time contributor to ESPN 850 Cleveland who gave an eyewitness account of Braylon Edwards’ 2009 fight with a friend of LeBron James, claimed ex-boyfriend Brandon McDonald (then with the Browns, now in the CFL) assaulted her in 2010, and was convicted of felonious assault and domestic violence against her husband in 2015 (that verdict was later overturned by a higher court thanks to improper sentencing instructions).

That’s quite the background for a health and life coach, and it’s certainly remarkable to see her pop back up in the sports world thanks to a relationship with Odom. Maybe she’ll be tabbed for next year’s Dancing With The Stars.