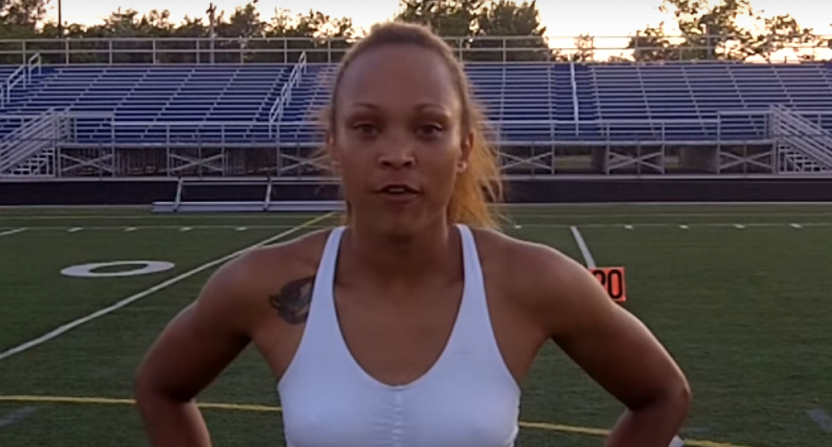 Sabrina Parr has gotten herself involved in yet another controversy around the Cleveland Browns, and this time it involves Jabrill Peppers. Parr is a long-time contributor to ESPN 850 Cleveland who gave an eyewitness account of Braylon Edwards’ 2009 fight with a friend of LeBron James, claimed ex-boyfriend Brandon McDonald (then with the Browns, now in the CFL) assaulted her in 2010, and was convicted of felonious assault and domestic violence against her husband in 2015 (that verdict was later overturned by a higher court thanks to improper sentencing instructions). Now, she’s going after Peppers, who the Browns picked 25th overall this year.

Parr (seen above in a screengrab from a 2011 video she did promoting the Cleveland Lingerie Football League team she played on) went on ESPN 850’s Real Big Show Wednesday morning and said Peppers is “on the lean and the molly” (“the lean,” as per Urban Dictionary, is a mix of promethazine with codeine, Sprite and Jolly Rancher candy, while “molly” is MDMA, or ecstasy) and “high all the time,” and also accused Browns’ veteran tackle Joe Thomas of being on drugs.

Update: Awful Announcing has heard from multiple sources that ESPN 850 has parted ways with Parr in the wake of this incident.

Here are the key clips, as posted to YouTube by RBS Reddit (yes, the show has a Reddit forum, and people are having fun with this meltdown there):

Here’s a transcription of the highlights of that clip. Parr starts with “I’m talking about Peppers, and why he’s not going to make it, because he’s on the lean. And the molly.” She then goes “Listen, the guy’s not going to make it. He’s not going to make it through the season. I told Hammer (co-host Aaron Goldhammer) last week he’s another Josh Gordon. I’m telling you, I’ve seen it first-hand, Rizz (yes, this is Tony Rizzo, who threatened to fight fans planning an 0-16 parade last year), from a different vantage point, and it’s the same thing all over again. How are you already high out of your mind when you’ve been here for a week?” Rizzo then interjects “Who’s high out of their mind?”, and Parr responds “Peppers!”

Goldhammer then points out that Peppers only had a diluted sample at the combine, not a positive drug test, and says “You’re acting like he’s high out of his mind all the time,” and Parr responds “I’m not acting, he’s acting!” She then goes on to say “I guess I can’t say certain things,” Rizzo goes, “No, you can’t,” and Parr adds “Well, just remember, I’m telling you now he’s not going to make it.”

Parr then goes on a rant of “Have you ever had to take a drug test? Have you ever had to be there and piss in the cup?” Producer Eric Williams then says “You can’t say that word, Sabrina” (oh, so apparently saying a player is constantly “high out of their mind” is fine, but “piss” isn’t?), she then quizzes him again, he says he hasn’t done it, and she goes “Okay, so please don’t even speak of it! You don’t even know how the process works?” Williams then goes “You don’t even show up to work! Don’t even go there!” and she responds “Well, at least I’m not not here because I’m in stage one of the drug program.”

Parr then laughs at Rizzo saying Peppers’ explanation of drinking too much water is hysterical, and Goldhammer describes Thomas’ tweet “No player should ever have a failed test for a diluted sample.” Parr then responds “And he’s on the lean too!” Goldhammer laughs and says “Joe Thomas? No. Sabrina, come on.”

Rizzo later says “You’ve been throwing stuff out for 52 minutes now, don’t stop now,” and Goldhammer says “My phone’s blowing up, Jabrill Peppers is calling me, I’ll call him back in the break. I have a couple messages from New Jersey numbers on my phone, I believe that’s where Peppers is from. So, thanks, Sabrina.” And she responds “No problem.” Rizzo then says “We stuck up for him.” Williams then says “The Browns have asked for the first segment of the show,” and Parr goes “That’s cool. I’ve been down this road before, I have no shame” and Goldhammer says “I have a suggestion for what the Browns can do, they can subscribe to TheLandOnDemand.com. Dial it up, Sashi [Browns GM Sashi Brown]! 85 bucks a year, $8.50 a month!”

Parr then again compares Peppers to Josh Gordon, Rizzo says she can’t do that because they’re two different people, she responds “The same issue!” and he says “You don’t know that.” Finally, Parr says her most logical line of the day: “Okay, I don’t know. I’m just guessing.”

After this, Parr went on to say that she was misquoted and taken out of context. It may be somewhat out of context (this is an edited clip), but it’s definitely her voice making some pretty stupid comments, comments that are damning regardless of the context. And as Bleacher Report’s Ryan McCrystal noted, she definitely wasn’t misquoted:

.@Sabrina_Parr You can't be misquoted on the radio. It's literally your own voice saying those words. pic.twitter.com/fCemtqHh8g

It remains to be seen what will come of this. People regularly make stupid comments on the radio, but these kinds of overt accusations of specific drug use by a specific player feel a bit beyond that. But none of the past controversies (including that domestic violence conviction, which includes a very specific report of how Parr hit her husband in the head with a trophy, requiring him to get seven staples) stopped ESPN 850 Cleveland from working with Parr. It sounds like this one has, though. In addition to the multiple sources telling AA she’s gone, and there was a station-wide e-mail to that effect, it should be noted that Parr has now deleted all of her tweets from today and removed “ESPN 850 Cleveland” from her bio.

This is an interesting one, though, as the station is the Browns’ rightsholder. Of course, that hasn’t stopped stupid stuff from the station before (such as 850 Browns reporter/columnist Tony Grossi accusing ESPN’s Bill Barnwell of secretly consulting for the Browns, in an ESPN.com column no less), but this kind of specific alleged drug use by a top Browns’ draft pick feels like an even further step. We’ll see if there’s any pushback from the team or any statement from the station.

Correction: This post initially had Peppers as the Browns’ top pick. That would be top overall pick Myles Garrett. Peppers was picked in the first round, but 25th overall, with a pick Cleveland acquired from Houston.