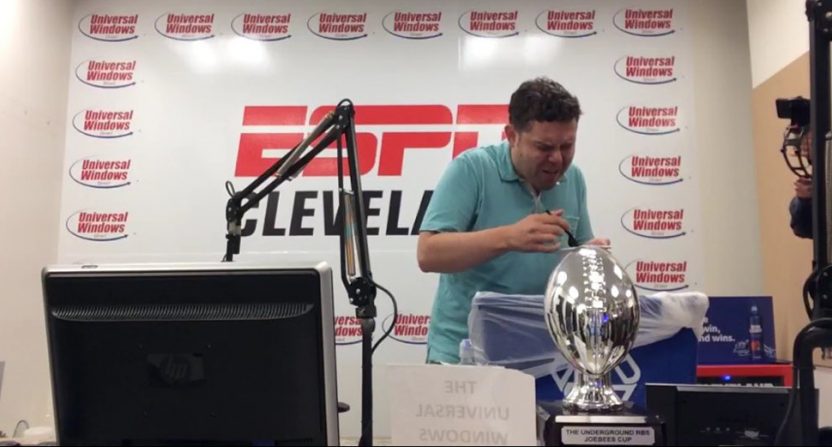 Back in April, ESPN 850 Cleveland radio host Aaron Goldhammer promised to eat horse poop if the Browns took Baker Mayfield first overall. Well, they did that, and Goldhammer vowed shortly afterwards that he would make good on his bet. Fast forward five months, and Goldhammer appears to have done that, chowing down on what Cleveland Scene described as “a bowl of horse manure and ketchup in a legitimately shitty attempt at a meatloaf” (and then quickly retching it up) on Friday:

Amazingly, this is the second long-delayed bet fulfillment around the Browns this offseason. The first was head coach Hue Jackson finally living up to his promise to jump in Lake Erie if the team went 0-16. And hey, he did that in June, six months after their season ended, so Goldhammer’s  actions here are relatively quick by comparison. Goldhammer tweeted about the experience afterwards:

It's over. I'm still breathing and still alive. Check out ESPNCleveland social channels for pics and TLOD has full video from multiple angles coming this afternoon. For now, in the words of LeBron, I'm going home…

And provided another angle:

The moment it finally went down!! Thanks to @TheRealTRizzo, @ChrisOldach, and our whole team for the support. Full behind the scenes video available at https://t.co/2CWFMEN7p2 pic.twitter.com/eXD4xZvtYc

And here’s a look at what’s in that bowl:

Pooptastic! That Bud Light will taste even better when the #Browns win this Sunday! https://t.co/tAynRvDpcV pic.twitter.com/SNToLyfyfL

Yep, you too can subscribe to ESPN 850 Cleveland’s TheLandOnDemand archives for more shitty content. Only $8.50 a month or $85 a year after a seven-day free trial, a relative bargain next to Mike’s On’s monthly price of $8.99. And hey, they may still have the classic clip of ex-contributor Sabrina Parr saying Jabrill Peppers was “on the lean and the molly.” Now there’s something shittier than anything Goldhammer managed Friday. But maybe he’ll be a little more careful with his bold bets going forward.