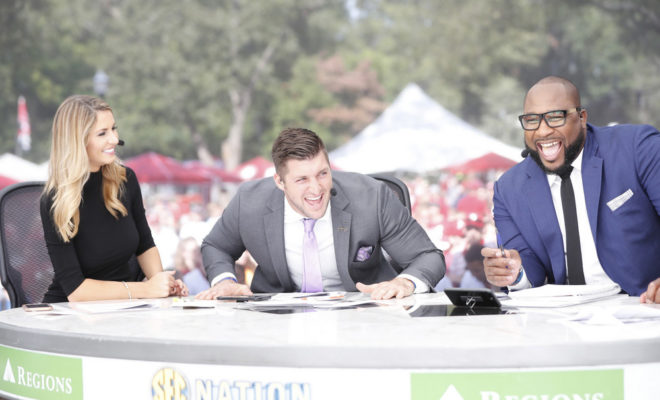 The duo shares the desk on SEC Nation on Saturday mornings and will continue to do so while also contributing to various network shows and programming.

Rutledge finished her first year as SEC Nation’s host last fall, her second with the show overall. she also expanded her work to include occasional stints as a SportsCenter anchor, red carpet host at the Home Depot College Football Awards, and red carpet host at the ESPYs. She also contributes to ESPN and SEC Network’s live-event programming for college football, basketball, gymnastics, baseball, and softball. It was not uncommon to see her involved her in coverage of the College Football Playoff, NCAA Women’s Gymnastics Championships, and both the Women’s College World Series and College World Series.

Tom McCollum, SEC Network senior coordinating producer, refers to Rutledge as “the ultimate utility player,” adding that “she truly connects with the subjects whose stories she shares, and it’s something we’ll benefit from for years to come.” Certainly, we know Rutledge is willing to go above and beyond for a quote or comment, like when she climbed to an athletic director’s box during an LSU football game to get a comment on the head coach situation.

Meanwhile, in addition to his weekly seat at the SEC Nation desk, Spears also worked as one half of SEC Network’s debut studio show, Thinking Out Loud. He is also a regular on College Football Live and makes various appearances on SportsCenter and SEC Now. He also contributed to SEC Network’s coverage of National Signing Day and was a field analyst for several SEC spring football games in 2018.