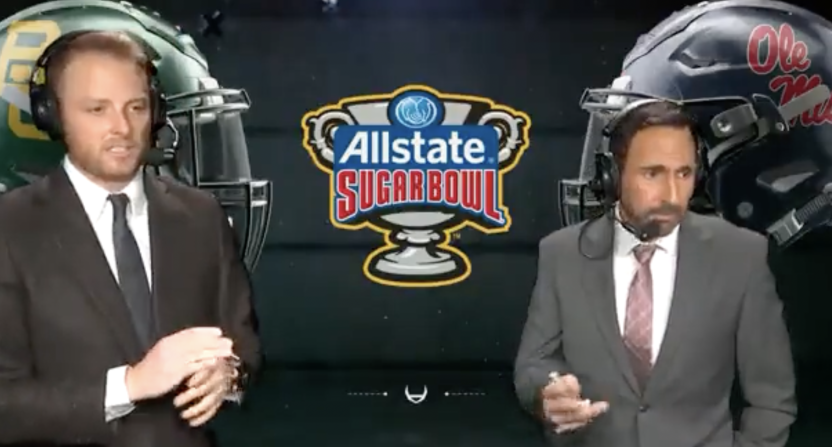 On Saturday, much was made of Kirk Herbstreit’s and Desmond Howard’s comments about college football players opting out of bowl games, which included the former players-turned-ESPN-hosts literally saying that the modern player “doesn’t love football” and “don’t really care about” playing in bowl games.

and, as befits a show that shouldn't even need to be on, the hosts are wilding out with "today's youth are entitled and it's the fault of video games" nonsense pic.twitter.com/4EdBFuTivH

As our Philip Bupp pointed out, not only are these classic “old men yelling at clouds” quotes, but they speak to a larger, more disturbing notion involving Herbstreit’s and Howard’s employer and its vested financial interest in keeping bowl games as interesting as possible.

Now, there are 43 bowl games, 40 of them air on a Disney-owned network and 59 unranked teams were set to play in a bowl game this season. There were 84 bowl-eligible teams compared to 46 who weren’t. And because of COVID, one of those 46 teams got to play in a bowl game. When 2/3 of the teams qualify and are scheduled to play in a bowl game, it’s no longer special to go to a bowl game. No offense, but if someone actually has pro aspirations, there’s no reason for them to risk tearing their ACL to try and win the “prestigious” Boca Raton Bowl.

All these games get big ratings and that’s why ESPN and the NCAA keeps wanting to expand the bowl schedule but, and while I get that Herbstreit and Howard can’t criticize their employer on the air, they also shouldn’t point the finger at the players and criticize them for not caring about bowl games when ESPN has watered down the bowl season so much that we’re seeing 6-6 Wyoming beat 7-6 Kent State on a blue turf field in Boise, Idaho.

ESPN might present at times like a news organization but it’s first and foremost an entertainment company. It wouldn’t be the first time that their lines blurred between independent opinion and corporate interests if there’s been some kind of mandate, implied or otherwise, to talk up the value of bowl game participation just as college football players begin to grasp the tools of autonomy and independence that coaches, administrators, and talking heads have used freely for decades.

It would be one thing to take the comments made Saturday morning by Herbstreit and Howard as their own contained thing. However, by the time Saturday night rolled around, an incident at the Sugar Bowl and the way one ESPN announcer responded to it, seemed to imply that there’s more to the comments beyond the opinions of a few people.

While he’s been touted as a first-round pick in the upcoming NFL Draft, Matt Corral decided to suit up for the Ole Miss Rebels on Saturday, saying that he wanted to honor his teammates and play alongside them in their big game. Even people who think potential draftees should opt-out know that it’s certainly his right to make that decision, and fair enough if he wants to leave it all on the field alongside the guys who got there with him.

However, late in the first quarter of the game, the one thing no one wanted to see ended up happening. Corral suffered a pretty bad leg injury that led to him being carted off the field.

Matt Corral has left the field in a lot of pain after this play. Praying for him ?#Baylor #Bears #SicEm #BUncommon #OleMiss #Rebels #HottyToddy #SugarBowl #CollegeFootball #BowlSeason pic.twitter.com/Be3NM9i33r

Corral returned to the sideline on crutches in the second quarter with tears in his eyes.

After he returned to the sideline and discussions about whether or not Corral made the right decision to play in the game swirled on social media, ESPN commentator Joe Tessitore defended the decision, saying that the Ole Miss quarterback “did it the right way.”

Joe Tessitore defending college football and saying Matt Corral “did it the right way” while Corral is emotional on the sidelines pic.twitter.com/txewxvZQ7i

“I know there’s been a lot of people railing on college football this year,” said Tessitore. “The transfer portal, NILs, and the changing landscape. Are these postseason games really meaningful outside of the playoff? Matt Corral is all you need to know. He’s doing it the right way. He cares about it the right way.”

Even if you want to say that Corral made the decision he wanted to make knowing the potential risks, saying that he did it “the right way” while standing on the sideline on crutches wondering if he’s cost himself millions of dollars certainly feels like a specific point of view. The same point of view that Herbstreit and Howard had earlier in the day. That players’ health and futures are secondary to the demands of the college football viewing audience.

After we won the Heisman in 2011, I made the decision to play in our bowl game because our program hadn’t won one in 19 years. That was my decision. Don’t condemn guys for opting out. Matt Corral’s injury is exactly why they do. Pray he is okay and his draft stock isn’t impacted.

Soon after, ESPN play-by-play announcer Greg McElroy chimed in with comments of his own and, for once, it was an ESPN college football voice speaking for the players, prompting some to wonder if the feedback had finally gotten back to them.

Wonder if someone at ESPN sent out a memo after the Herbstreit comments. https://t.co/5ENntAC7w0

“I’m just absolutely sick,” said McElroy. “You understand why guys decide to opt-out. You always get it. It’s to avoid that potential fate and the possibility of dropping in the draft as a result.”

Ole Miss ended up losing the game, 21-7, though they finished the season with their first 1o-win campaign since 2015. The extent of Corral’s injury is still TBD and everyone is hopeful that it won’t end up affecting his ability to play or get drafted in the same spot he would have been if he hadn’t played in the Sugar Bowl. Corral will almost certainly say publicly that he has no regrets about playing that’s absolutely fair.

The issue wasn’t and still isn’t Corral’s decision. The issue is that ESPN is a compromised entity in the discussion about college football players making decisions for themselves when it comes to bowl game participation. They are arguably the leading platform in America to set the tone about the sport but they are also the entity with the most financially vested interest in getting the best players to participate in bowl games.

Whether Herbstreit, Howard, and Tessitore are speaking for themselves or not is irrelevant. They represent the company that owns bowl games, broadcasts bowl games, and pays them millions of dollars to talk about those bowl games. When they speak, seemingly in unison, about how student-athletes must conduct themselves, lest they be considered ‘incorrect’ or ‘uncaring,’ they are doing so on behalf of a company that wants that kind of messaging reinforced.

They want you to see those who opt-out as self-interested cowards so that those players feel shamed into playing in an exhibition football game for your pleasure even if it contradicts their personal goals or plans. It’s up to you if you want to buy into that, but you should always remember why they want you to feel that way.

ESPN trying to blame kids for diluting all the bowl games they produce when they spend months pouring every bit of promotional energy behind the CFP they also own pic.twitter.com/2jJ6ZVhOdX

ESPN made $182 million in ad sales on the 2019 round of NY6 games, and an additional $77 million on second tier bowls

Really makes you wonder why their most high profile talking heads villainize star players who choose to opt out? ???