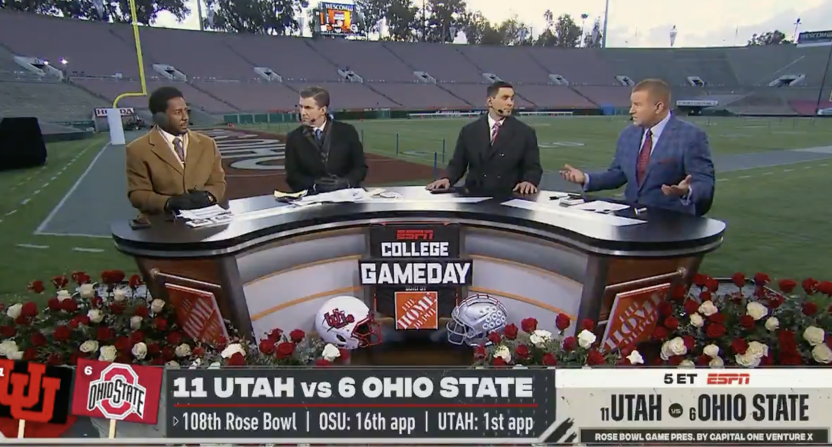 While it’s not entirely new, more and more money is being poured into college football these days, and more and more players are realizing that this is a business and not a game. Even before they were able to profit from their name, image, and likeness, some college seniors have chosen to opt out of playing in their bowl game due to a risk of being seriously injured and hurting their chances of playing (and making money) in the NFL.

and, as befits a show that shouldn't even need to be on, the hosts are wilding out with "today's youth are entitled and it's the fault of video games" nonsense pic.twitter.com/4EdBFuTivH

Herbstreit: “What’s the difference as a player in saying these games are “meaningless” when, Des we played in quote unquote “meaningless” games. I mean I know you guys (Michigan) were here (Rose Bowl) a lot. But I just don’t understand if you don’t make it to the Playoff, how is it meaningless to play football and compete?”

“Isn’t that what we do as football players? We compete? So I don’t know if changing or expanding it is going to change anything, I really don’t.”

“I think this era of player just doesn’t love football.”

Howard: “That’s what I was about to say. We’re dealing with a different mentality when we’re dealing with these student-athletes nowadays, especially the football players. I mean, their whole mentality right now is about the championship, the Playoff. We gotta get into the CFP. And because of that, they don’t value the bowl games.”

“Now when we were coming up, Herbstreit and myself, to go to a bowl game was a huge reward for a fantastic season. That’s what it meant. It’s like, ‘Okay, your team played this well so you’re going to be rewarded by going to this bowl game, you’re going to get a ring, you’re going to get swag.’ Now, kids don’t really care about that. They have a sense of entitlement and it’s like if we’re not going to the one that matters, then it just doesn’t have as much value to them as it did us growing up.”

There’s a lot to unpack here. I could do the standard “players are opting out because if they get injured, it may hurt their pro chances” argument and while that’s completely true, the issue is much deeper than that.

First off, the idea that today’s college football player “doesn’t love football” is such a braindead lazy take that it’s depressing that qualifies as “analysis” these days.

Some of these players have pro aspirations in mind and may see college as a stepping stone, but to borrow a quote from the NCAA, “Most of us go pro in something other than sports.” A lot of these players are playing because they do love the game. Because if they’re not going to the NFL, why would they play in the first place?

When it comes to bowl games being “meaningless,” yeah, most of them are. A big reason for that is due to Herbstreit and Howard’s employer, Disney. Back in “their day” of the early 90s, there were 18 bowl games and in 1992, only 11 unranked teams made it to a bowl game.

Now, there are 43 bowl games, 40 of them air on a Disney-owned network and 59 unranked teams were set to play in a bowl game this season. There were 84 bowl-eligible teams compared to 46 who weren’t. And because of COVID, one of those 46 teams got to play in a bowl game. When 2/3 of the teams qualify and are scheduled to play in a bowl game, it’s no longer special to go to a bowl game. No offense, but if someone actually has pro aspirations, there’s no reason for them to risk tearing their ACL to try and win the “prestigious” Boca Raton Bowl.

All these games get big ratings and that’s why ESPN and the NCAA keeps wanting to expand the bowl schedule but, and while I get that Herbstreit and Howard can’t criticize their employer on the air, they also shouldn’t point the finger at the players and criticize them for not caring about bowl games when ESPN has watered down the bowl season so much that we’re seeing 6-6 Wyoming beat 7-6 Kent State on a blue turf field in Boise, Idaho.

So in a way Herbstreit and Howard were right, playing in a bowl game back in the early 90s was a reward because not everyone got to play. Now, that’s not the case. And that was before the College Football Playoff was a thing. An actual good analyst should be able to recognize that it’s not 1992 anymore and be able to alter their analysis to fit with today’s game.

Don’t get me wrong, I hated participatory trophies when I was a kid and there comes a time where kids should be taught to compete and strive to win. But what exactly is bowl season, other than a bunch of exhibition games featuring a bunch of teams who weren’t good enough to play for the National Championship instead playing for what amounts to a bunch of participation trophies? Sure, these teams are actually playing and in a sense, the winner of the LendingTree Bowl will have earned their trophy. But no player, not even someone who played back in Herbstreit and Howard’s day, laid in bed at night and dreamed of winning the Blockbuster Bowl. Maybe the Rose Bowl, but definitely not the Blockbuster Bowl.

You can’t have it both ways. It’s confusing to me when Howard criticizes players because “their whole mentality right now is about the championship,” and that kids these days are entitled, when these kids’ mindset is to strive to be the very best and win that championship. And now they’re being criticized for that? When they have been told all their lives that “participatory trophies are for wussies?”

Let’s face it, this lazy analysis from Herbstreit and Howard is nothing new. They didn’t invent this phenomenon that the older generation believes they’re perfect in every way and that the younger generation is the absolute worst and they’re weaker and more entitled. It’s like that in society and in college football. I’m sure the CFB analysts back in the day criticized Herbstreit and Howard’s generation and accused them of all sorts of things because “Back in our day, Bear Bryant made us run until we puked. And we didn’t get no water breaks either.”

I’m sure if you go back further, those people were criticized when they were playing by those older than them. In the future, when the current college players get to be Herbstreit and Howard’s age, they’ll too be out of touch and criticize the future players for nonsensical things that aren’t their fault.

A lot of this is due to people like Herbstreit and Howard seeing younger players getting opportunities they didn’t get to have and being butthurt that they didn’t have the kind of exposure, the platform, or the ability to make money that players today have back when they were in college. Back in 1992, only the top and more established teams were on national TV. Even then, most of those teams weren’t guaranteed to have every game on national TV. Now, pretty much every game, regardless of the team, is available throughout the world either on cable or streaming.

No one is disputing that college football players today have so many more advantages that past generations didn’t have. But if Herbstreit and Howard ignore the fact that they too had advantages when they played that older players didn’t have, then they’re just continuing a jealousy and bitterness toward a group of people who had nothing to do with how greedy college sports actually are.

It just speaks of two people who aren’t afraid of embracing the fact that they’re out-of-touch that they can only apply their experiences from 30 years ago into a sport that has vastly evolved and can only blame the players because they can’t admit, or don’t want to admit, that the game has passed them by. Maybe it’s best for them to go see a therapist for help with that instead of projecting their insecurities and regrets onto those who are doing like everyone else is doing in college sports (including Herbstreit and Howard) and making the best business decision for themselves.