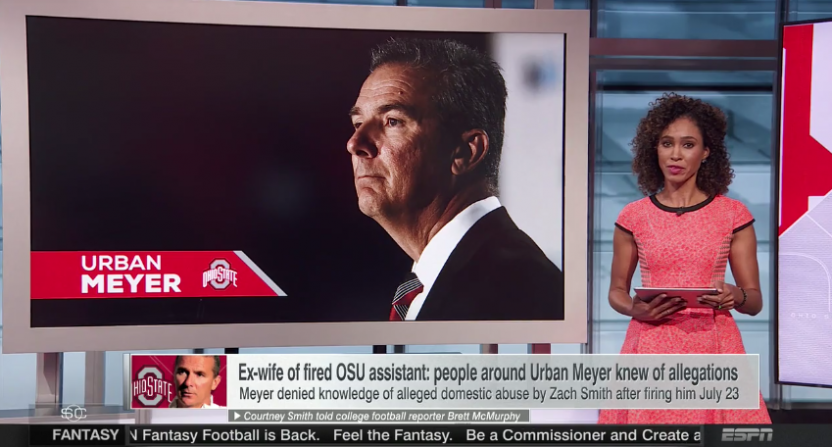 Brett McMurphy is still under contract with ESPN. He still gets paid by ESPN despite having been laid off over a year ago. His contract expires this fall, and we’ve been told (and it’s been reported) that once he isn’t under contract, he’ll land at Stadium.

Today, McMurphy dropped an absolute bombshell of a report, which has many wondering if Urban Meyer is done at Ohio State (he’s just been placed on paid leave, which usually signals he’s on borrowed time at this point). The article that turned the sports media world upside down was posted on, of all places, his personal Facebook page. McMurphy’s 3,783 word article included a cringeworthy amount of texts and photos provided by Courtney Smith, which make a very convincing case that Urban Meyer had a much higher level of complicitness in Zach Smith’s safeguarding, both in terms of legal repercussions and job security, than Meyer had alluded to last week. 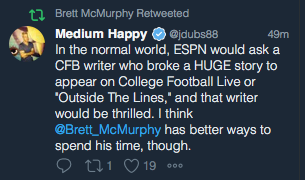 The post went up not long after 10 AM ET. Social media lit up with analysis and commentary. Not long after, major outlets were covering the story. The story was beginning to snowball. Urban Meyer’s job was, and still is, in jeopardy.

During the 2 PM hour, ESPN finally had their ducks in a row and began to cover the story. When they finally did, some platforms still referred to McMurphy as an ESPN reporter.

ESPN wasn’t alone in the slow response as The Columbus Dispatch, the local newspaper in Columbus (a city where I reside and is probably a lot bigger than you think), didn’t publish anything on the topic until around 3:30 PM, more than five full hours after McMurphy initially dropped the story.

Courtney Smith, the ex-wife of a fired Ohio State assistant coach, stated that people around Urban Meyer, including his wife Shelley, knew about a 2015 domestic violence allegation against her husband.https://t.co/2SPyOJapHw pic.twitter.com/dP7a7hZgLQ

Before ESPN and the Dispatch offered up any coverage, Courtney Smith gave an exclusive interview to Stadium, sharing more of her story and what she believed Shelley (Urban’s wife) and Urban Meyer knew. With all that transpired, here a few thoughts.

What took ESPN so long?

How about ESPN simply not reporting about Urban Meyer allegations because Brett McMurphy, former employee, broke the story on his Facebook page. Wild

ESPN folks were defensive when we (and many others) were vocal about the four hour delay. One thing that we discovered is that ESPN was holding a college football reporter seminar when this story broke. Some at ESPN believe McMurphy planned the release of the story to fall in that gap, an accusation McMurphy takes great offense to.

How will ESPN phrase/credit @Brett_McMurphy’s excellent reporting on Urban Meyer? “As first reported on Facebook by renowned college football reporter we laid off”?

ESPN personnel were vocal with me on Twitter, noting that the story required a lot of their own original reporting. The obviously delicate nature of the topic also was likely a culprit, as this wasn’t an NBA trade or PED suspension that was reported elsewhere. That said, this story came from someone ESPN knows very well. It’s not like this was a message board rumor or something that popped on Twitter without much attribution. McMurphy’s article didn’t rely at all on anonymous sources and presented plenty of compelling evidence.

.@Brett_McMurphy tells @BullandFox every piece of his report is either documented/text, direct quote or picture. Not one part of it is from unnamed source. Has messages from coach’s wives etc

When ESPN did finally publish a story, it was a pretty simple aggregated rewrite that heavily leaned on McMurphy’s original report, with not much (if any) of their own reporting or commentary. It essentially was indistinguishable from other versions that appeared on other sports sites hours earlier. That’s a long way of saying that I don’t particularly buy that they were holding off due to new information they were collecting or additional context they wrote into their version of the story.

I think, more or less, the slow response was due to a variety of factors, and the seminar played just a minor role. Ultimately, this story was making huge waves everywhere else but ESPN. In fact, ESPN has now covered this story without any other stories for over an hour on SportsCenter. IMO, ESPN struggled to make a decision on how to cover this story given McMurphy was an employee they let go, they were already behind on the story, and they wanted to figure out what platforms and personalities it made sense to start their coverage on. I imagine the seminar probably played the largest hindrance in that regard, but it still doesn’t really explain the four hour delay on the initial article.

In the normal world, ESPN would ask a CFB writer who broke a HUGE story to appear on College Football Live or "Outside The Lines," and that writer would be thrilled. I think @Brett_McMurphy has better ways to spend his time, though.

While I get the logic here, the fact of the matter is ESPN could have easily done some level of minimal coverage and acknowledgement within the first 90 minutes or two hours if we’re being generous. That’s the expectation viewers, listeners, and readers have, and regardless of how and why this got punted for four hours, the lack of the timeliness of the coverage fell woefully short of most people’s expectations.

Similar to your aunt that really loves to share nonsensical stories, Brett McMurphy doesn’t have an editor on his Facebook page. This story dropping on Facebook essentially meant that it didn’t go through the same checks, balances, and fact checking that would take place elsewhere, like a traditional media outlet in the vein of ESPN. Smith’s interview on Stadium added a bit of another layer of complexity to the story, as many people aren’t overly familiar with Stadium and how to best access their content or how to properly credit them.

I read @Brett_McMurphy's post on Facebook and think to myself: How on earth could ESPN have let this guy go if they care about college football reporting.

While I get the complications here, I think most people (including ESPN Radio personalities who have much more liberty to control their programming and did proactively cover the story) could read McMurphy’s article and know this was as massive bombshell that was going to dominate the news for awhile. ESPN didn’t have to push all in with their coverage right away, which they have done now. What stands out is they put out nothing for hours in what will be the biggest story this week and likely one of the biggest stories of 2018.

The delay allowed ESPN detractors to make up whatever the hell they wanted.

I tweeted this three hours after the story broke.

Nothing on ESPN’s front page about the Urban Meyer report. This is the CFB page. Every other sports site (and major portal) has this as a top story. Yes it’s awkward you fired the guy who broke the story but this isn’t a good look. pic.twitter.com/9eGdOTEQaB

A quarter of a million people (not to pat myself on the back) have seen this tweet. It’s possible that by tomorrow morning, that number will be closer to one million. The majority of the comments to this tweet are from people seeing this tweet hours after ESPN finally did mobilize their response. Many of them are ignoring the time stamp and thinking that nearly ten hours later, ESPN still hasn’t decided to cover this story. Basically, the outrage was so vocal that there are now a ton of largely baseless conspiracy theories out there, including the following:

Let's all take a moment and sneak a peek at how #ESPN is continuing to bury the Urban Meyer story on their website, easily the biggest news of the day. Clearly prioritizing their lofty college football television contract over domestic violence for as long as they're able.

The delay more or less let people fill in the blanks and invent whatever criticism they wanted to, which is something that happens often with ESPN. What I think ESPN still struggles to realize is that their perceived political leanings has made a sizable amount of sports fans thirst for the demise of ESPN. People more or less get off on bashing ESPN, regardless of what the issue is and how much merit it has. The disdain for the network in some corners closely mirrors what we’re seeing across the political spectrum.

That’s a long way of saying that ESPN still struggles in putting out fires before they get too big and that often they’re not nimble enough to get ahead of stories before they snowball beyond their control. Perhaps ESPN doesn’t think much about what a fringe sliver of their audience thinks and says, but I can only say that the sliver of folks who go out of their way to blast ESPN for anything and everything has continued to grow, and the network hasn’t provided a very effective response to those detractors.

ESPN fell short of many sports fans’ expectations today. I’m an Ohio State fan and alum and I spent half my day scratching my head as to what in the world they were doing today.

But beyond the flat footed coverage today, it’s even more of a head-scratcher as to why Brett McMurphy is still getting ESPN checks to break major stories, but just not for ESPN. His termination was already deemed as an odd move and makes you wonder how much traffic, ratings, and authority the network lost (especially in the college football world) by sidelining one of their better reporters while they continued to pay him. Both moves are not indicative of a company that continually pounds their chest as “The Worldwide Leader in Sports” while also touting its commitment to journalism whenever it can.