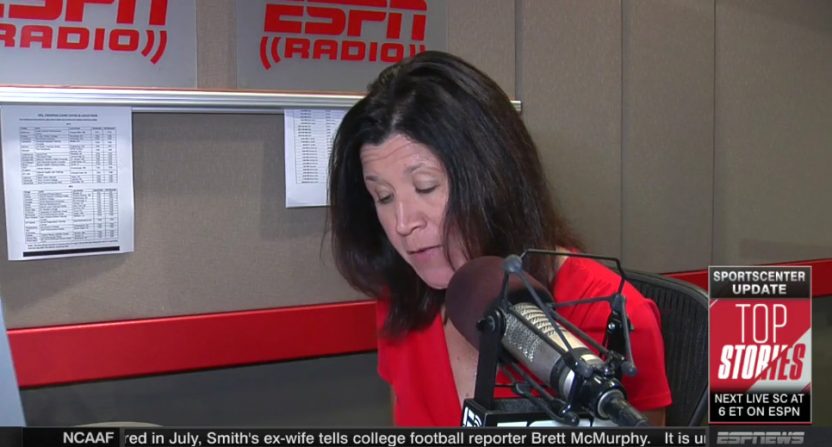 On Wednesday, ESPN was blasted for waiting almost four hours to cover Brett McMurphy’s explosive Facebook story about Courtney Smith, the ex-wife of former Ohio State football assistant coach Zach Smith, and her allegations that Shelley Meyer and Urban Meyer knew of Zach’s domestic abuse of her. The network did eventually cover it in a ESPN.com story around 2:06 p.m. Eastern, and they covered it well on at least one radio show, with Paul Finebaum Show fill-in host Matt Jones interviewing McMurphy at 3 p.m. Eastern.

However, that was only on radio. The story was also discussed on TV on The Dan Le Batard Show (simulcast on ESPNEWS), and then again on that channel, but in problematic fashion. The Will Cain Show update anchor Christine Lisi referred to it during an update segment, and said Courtney Smith “told ESPN’s Brett McMurphy,” forgetting (as Steve Levy did in December) that McMurphy was laid off from ESPN last April:

Lisi returned to this in a later update, saying Smith “told Stadium” this time. Which is sort of accurate (she did talk to Stadium in an exclusive video, and McMurphy is believed to be heading there once his ESPN contract expires), but it would have been better to mention McMurphy specifically, as he broke the news on Facebook.

At any rate, mistakes happen, but that’s not a great one for ESPN, especially with it being about someone they laid off and coming after another controversy about how long it took them to acknowledge McMurphy’s reporting. And that’s especially awkward with this appearing to be the first mention of this on an ESPN TV network. (The McMurphy interview on the Finebaum show would normally be that, but that show is radio-only at the moment with Finebaum himself on vacation.) ESPN employees should probably realize McMurphy no longer works there by this point.