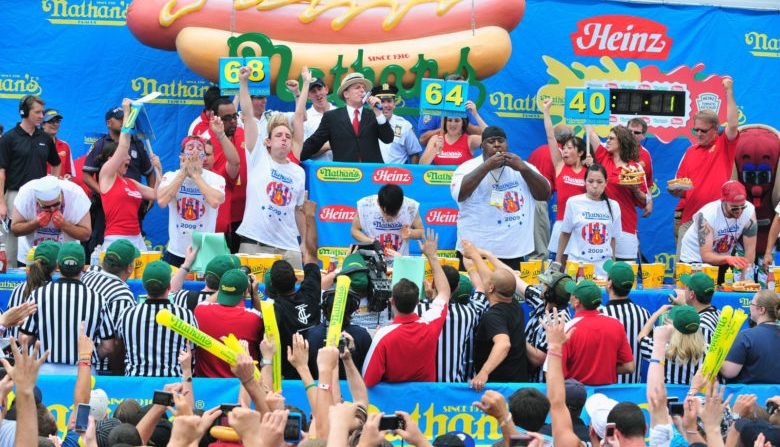 One of the big discussions in sports recently has been about the poor scheduling slots and treatment women’s sports have often received. That’s now sparking some talk even with an ESPN-aired event that many don’t consider a sport, the Nathan’s Hot Dog-Eating Contest. That event has been held on Coney Island on July 4 since the 1970s, and this will mark the 18th consecutive year it’s been televised on ESPN; however, the women’s contest (there had been some female competitors in the early years, but the women’s division was separated out in 2011) will only air on ESPN3, ESPN’s cable-authentication-required streaming service. That fits what was done in 2019, but last year saw both the women’s and men’s events aired on ESPN. That’s no longer the case this year, as per an ESPN release:

Nathan’s Famous will conduct the 2021 Fourth of July International Hot Dog-Eating Contest at Maimonides Park on Coney Island Sunday, July 4, 2021. George Shea, MLE chairman, will host the stage show for the historic contest, which has been held in Coney Island, NY, for decades and attracts top eating talent from around the world.

For the second year, ESPN commentator Mike Golic Jr. will do play-by-play of the eating competition. The show will also include an in-depth analysis by Major League Eating’s Richard Shea, with reporting by ESPN’s Jason Fitz. Seven-Time Women’s Champion Miki Sudo will join Golic and Shea in the booth for the women’s competition. The coverage will feature Joey Chestnut competing for a record 14th title in 15 years in the men’s contest. In addition to the live event on ESPN, an ESPN3 camera will be focused on Joey Chestnut as he attempts to break his world record of 75 hot dogs and buns in 10 minutes.

It’s unclear why ESPN made the decision to return to streaming-only, authentication-required coverage of the women’s event after airing both contests on their main cable network last year. It doesn’t seem to really be about scheduling; as per TV Guide, while ESPN has a F1 race until 11 a.m. Eastern that day, their 11-noon Eastern coverage is just SportsCenter. And it’s not like Saturday morning SportsCenter is such a crucial slot that a full hour is required there to cover sports news.

Thus, it seemingly would have been easy for ESPN to follow the 2020 practice of showing both the men’s and women’s events on their main network. Instead, they’ve bumped the women’s event to ESPN3. And while this isn’t the biggest sport in the world, it is interesting that ESPN is making this call to make the women’s event streaming-only (and not even available on their over-the-top streaming service, ESPN+; that at least has the advantage of being accessible to people without cable, whereas ESPN3 is just “You need a cable subscription to watch things there, but we can’t be bothered to put it on an easily-accessible cable channel”), after a year where they decided to feature it alongside the men’s event.