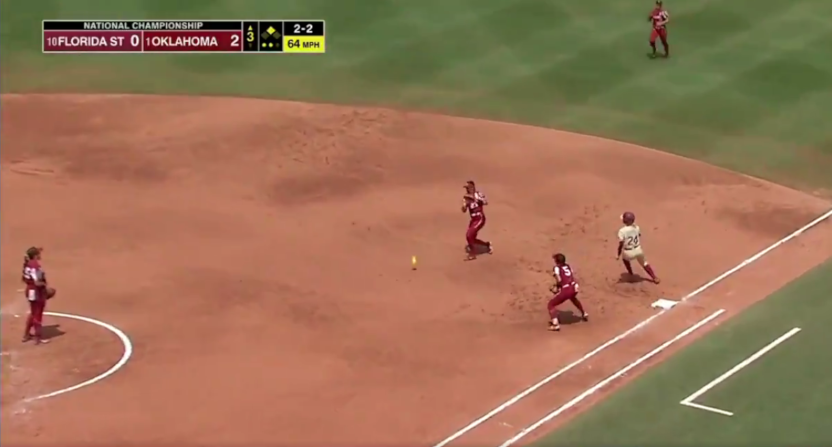 A recurring theme of sports in the last decade is that they’re generally optimized for the highest-possible TV viewership, which usually involves putting the biggest teams and the biggest games in primetime. It’s called that for a reason, especially in the multi-time-zone U.S., where the 8 p.m. to 11 p.m. Eastern slot (which starts at 5 p.m. PT Pacific) is generally preferred for national live sports broadcasts; that’s why so much focus is placed on national NFL primetime games, for example. And so it’s certainly interesting when a championship game winds up outside of that window, as was the case for the winner-take-all Game Three of the Women’s College World Series Thursday with a 3 p.m. Eastern start on ESPN.

The NCAA and ESPN drew a lot of criticism for that start time. And playing in the sun may have even impacted the game. One particular moment on that front was the Florida State Seminoles’ first run, which came on a fly ball in the infield that Oklahoma Sooners’ infielder Tiare Jennings lost in the sun:

Florida State gets on the board after the Sooners lost this ball in the ☀️.

(It's 91 degrees and sunny in Oklahoma City today).

Yes, of course, there are day games in both softball and baseball, even including Major League Baseball. And yes, of course, on-field play can be impacted by night games too, whether that’s from rain or other weather or losing a ball in the lights. But the point here is that at least partially primetime championship games are the norm in most sports, including baseball and softball, and artificial lights are usually constant and easier to account for. And even the first two games of this championship series started at 7:30 p.m. and 7 p.m. Eastern respectively (6:30 and 6 p.m. respectively in Oklahoma City, where this is being held).

So there are some potential issues for players from a 91-degree, mid-day game with plenty of bright sun, and that’s yet another insult to these players. There have been lots of those throughout this tournament, including competing at a stadium that doesn’t even have on-site showers. And having a championship game when it’s 91 degrees with bright sun in middle of the afternoon is pretty unusual, and beyond the impacts for the athletes there, this feels like terrible positioning for viewers. The decision to put this third game mid-afternoon has already taken some harsh criticism, a lot of which can be found on Twitter. Beyond that, there were some notable comments from Dani Wexelman (who hosts Sirius XM shows on both MLB Network Radio and ESPNU, and is co-hosting a WCWS post-game show with Nicole Auerbach of The Athletic), as Ryan Fagan noted in a Sporting News article ahead of the game:

For an event like this, broadcasting a game that’s the culmination of an incredible season — especially after a season lost to the pandemic — at 3 p.m. ET on a Thursday is wrong.

“It’s a disservice to the women who have worked their asses off to make it to this point, to put them in a time slot that is not conducive for getting max amount of eyeballs,”  Wexelman said. “That could have been changed. It is not set in stone that you have to air this on your channel at this time. There’s a person who could make a decision to say, ‘We’re going to change this.’ It is not set in stone. No one dies because we change what’s on the television. For you to not give them the prime-time spot in Game 3 — this is their Game 7! — a winner-take-all, and you’re going to put them on in the afternoon on a Thursday? It’s disappointing. I’m embarrassed that they couldn’t figure out something better. I’m embarrassed for the NCAA that they couldn’t give these women a better schedule, so they’d have the opportunity to have Game 3 in prime time. I’m embarrassed.”

Yes, this wasn’t the initial plan. The championship series was initially planned to run Monday, Tuesday, and Wednesday if necessary, but was moved to Tuesday/Wednesday/Thursday Sunday following weather issues that postponed games Saturday. Another factor was Florida State’s performance Sunday afternoon in a 2-0 win over Alabama, which meant a second “if necessary” semifinal against the Crimson Tide was in fact necessary, and the NCAA made the wise decision to move that to Monday (and that one did air partially in primetime, starting at 7 p.m. Eastern) rather than play it at midnight or so Sunday.

But at that time, the NCAA announced the Tuesday/Wednesday/Thursday schedule with the Thursday game being in the afternoon. So this was known for days in advance. And they and ESPN could have and should have made alternate arrangements at that point. (For comparison, last year’s men’s baseball College World Series had each game at night. This year’s schedule for the final games of tournament isn’t yet set.)

Of course, this is not as simple as just “put it on ESPN in primetime Thursday night!” ESPN has prior commitments with a NBA playoff doubleheader Thursday night, showing the Brooklyn Nets and Milwaukee Bucks at 7:30 p.m. Eastern and the Los Angeles Clippers and Utah Jazz at 10 p.m. Eastern. That’s not moving. So a later game Thursday would have had to wind up on at least ESPN2. (And Friday also has a NBA doubleheader on the main ESPN network and a UFC event on ESPN2). But there’s at least an argument for putting it on ESPN2 Thursday night; yes, ESPN2 has the NCAA track and field championships at 5:30 p.m. Eastern and then a Professional Fighters League MMA event at 9 p.m. Eastern, but it would seemingly be possible to bump the track and field to ESPNU (especially as that’s also a NCAA event, so it’s the same rightsholder involved) and throw softball in that slot.

Would have putting this game in a later time slot on ESPN2 Thursday have led to larger ratings numbers? That’s an interesting hypothetical discussion. On one hand, it would have faced stiffer viewing competition from the NBA games; there really isn’t much else on at 3 p.m. Eastern on a Thursday. And ESPN is a higher-profile channel that more people automatically turn on. But on the other hand, it would have benefited from more of the country likely being able to watch, and there really isn’t a ton of carriage difference between ESPN and ESPN2 (the last Nielsen carriage estimates we covered, in September 2018, had them within 1,000 homes of each other).

Thus, if this had been on ESPN2 in primetime Thursday, most people who had ESPN and were looking for this game could probably get it. (ESPNU and ESPNEWS are significantly further down in carriage, so a discussion involving them is more complicated, but the ESPN-ESPN2 gap doesn’t appear to be that big.). And a primetime Game 3 would have been an interesting viewership data point to discuss in terms of the overall audience for top women’s sports events, especially with Game 1 of this series Tuesday setting viewership records. But we didn’t get that.

Instead, we got a presumably popular winner-takes-all game on main ESPN in the middle of the afternoon. And mid-afternoon sun certainly seemed to lead to a easy fly drop, and while that may not matter much in the end (Oklahoma led 5-1 through six innings), that’s still a notable thing to see. And putting this game in the afternoon seems like a loss, not just for the athletes who had to play in the heat and sun, but also for the viewers who might have tuned in if this had been at a better time.