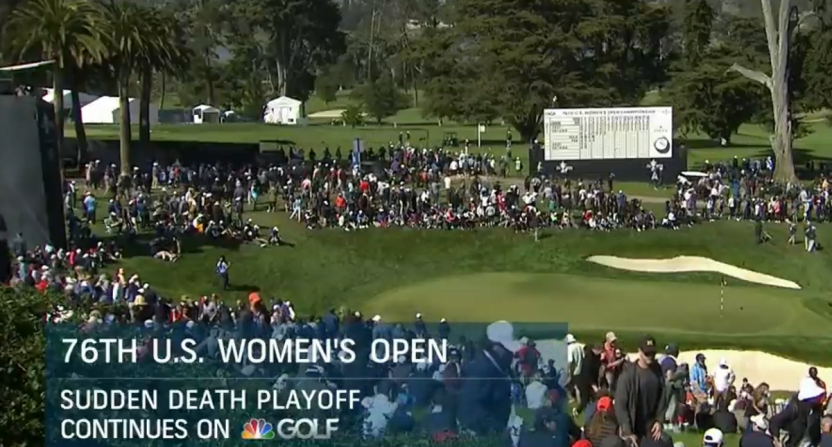 The U.S. Women’s Open is by far the biggest event in women’s golf. This year’s edition, at San Francisco’s Olympic Club, offered something very rare for the women’s game: primetime network coverage.

Instead, tee times were moved up on Sunday and players were sent out in threes in large part to try and finish the championship before NBC’s USA Gymnastics National Championships coverage, originally set for 7 PM Eastern.

When the 7 PM hour rolled around, though, golf wasn’t finished, with Lexi Thompson’s collapse leading to Yuka Saso and Nasa Hataoka battling it out in a playoff. The U.S. Open playoff format is no longer eighteen holes on Monday; it’s instead a two-hole aggregate playoff followed by sudden death.

NBC stuck with the playoff for the two holes, with gymnastics coverage starting on CNBC, but after both players finished those holes tied and things went to sudden death, the broadcast was dumped from NBC to Golf Channel.

That did not go over well with golf viewers, and they certainly have a point.

The final round was in the middle of “uninterrupted” coverage presented by sponsor Rolex, which made for a bit of irony. Especially considering the USGA’s newly-created program designed to help increase coverage of women’s golf.

Uninterrupted coverage interrupted. @usga and @rolex must be thrilled. At least they didn’t send it to @peacockTV. BTW, not sure if you’ve heard, The Office is there now. Every season.

That lack of ads, though, probably helps point to why NBC would be inclined to pull the plug on the sudden death playoff finish to the biggest event in women’s golf (and one of the biggest in golf in general), in primetime. Usually that would be exactly what a network would hope for.

And it’s possible every other network would have stuck with it, too, but this is NBC, and it’s an Olympic year, and gymnastics is a key part of that particular revenue driver. NBC, meanwhile, took over the USGA rights from Fox as a sort of bonus; they’re not nearly as incentivized to highlight events like this one.

There’s another side too; people tuning in for gymnastics were also annoyed by the golf coverage.

Golf Twitter is about to go off but let me tell you Gymnastics Twitter is NOT happy about this either! Always two sides to nobody being happy on Twitter. pic.twitter.com/FqizdpV4Wx

As for the finish to the U.S. Open: Yuka Sasso won on the third playoff hole, becoming the first Filipino golfer to win a women’s (or a men’s) major championship.

A moment that means everything ❤️

So, who’s to blame? NBC was in a difficult spot, of course. Gymnastics drives revenue, and there were no ad spots running in primetime during golf coverage thanks to the sponsored uninterrupted coverage. On the other hand, this was the peak of the the event; a sudden death playoff at the end of four days at the biggest event in women’s golf.

It boils down to this question, though, which is always the litmus test for moments like this involving women’s sports: would the men’s U.S. Open have been dumped in a playoff?

No. It wouldn’t have been.

That really, really sucks, and anyone mad about it has every right to be, no matter what NBC’s explanation is.