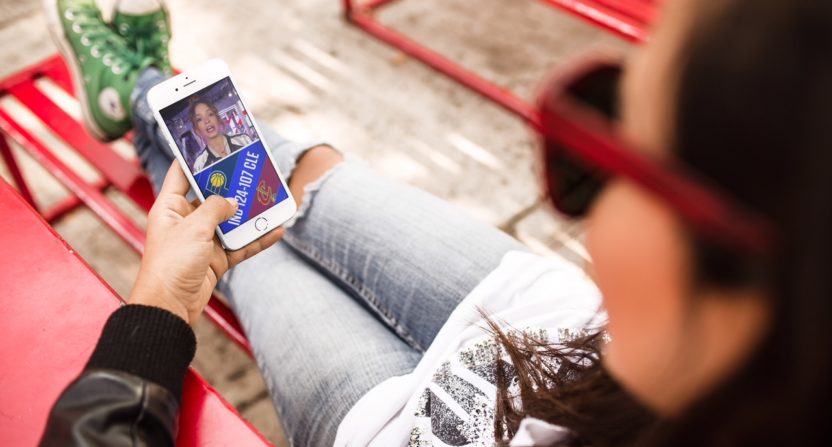 With ESPN launching two daily SportsCenter editions on Snapchat, the thinking is that this is not your father’s SportsCenter. SportsCenter on Snapchat is reaching a totally different audience, a younger demographic that hasn’t necessarily grown up watching SportsCenter as other generations have.

SportsCenter has evolved from a straight news and highlights show when it launched back in 1979 to personality-driven programs (i.e., the midnight ET show with Scott Van Pelt and the SC6 edition with Michael Smith and Jemele Hill). Now, we have three to five minute editions on Snapchat featuring viral videos and some highlights (although none from the NFL).

ESPN will have dedicated hosts of SportsCenter on the small screen, including Katie Nolan, Elle Duncan, Cassidy Hubbarth, Jason Fitz, and Cy Amundson.

He notes that SportsCenter on Snapchat will have anchors in casual clothes, “The cast of characters is going to be very different than you would think of as your typical SportsCenter cast of characters.” Jacobs said that’s intentional because Snapchat is more personal a medium than television, “That’s what this show needs to be. This show needs to be one sports fan interacting with another sports fan.”

Nolan said it’s exciting to be able to do things she thought ESPN would never let her do on a SportsCenter, but on Snapchat, she can, “If you know anything about me, you wouldn’t think ‘SportsCenter host,’ it’s not exactly the first thing that pops into your mind, but this is something that’s going to be very different, built around the personalities, it’s very exciting.”

As for Jacobs, this is a chance to reach a new audience and make SportCenter a true brand on Snapchat, “It’s not us reporting news necessarily, but us sharing interesting things that are going on in the world of sports. And eventually it’s that community aspect and that’s where we’ll really be successful in reaching and engaging fans.”

Jacobs says that ESPN is fully committed to Snapchat and with a two-year contract to produce SportsCenter, he hopes that this will become an institution just like the TV edition.

Nolan tells Awful Announcing that when she was doing the Snapchat test shows, it was just good to be working again and show off her personality, “I don’t know how to turn it off. You’re going to get it whether you want it or not.” Nolan added, “That’s sort of the beautiful secret mystery of my career, that I’ve stumbled my way onto this amazing job where I get to be myself all the time. I’m sure that’s not going to work for me anymore, but for now, I’m really enjoying it.”