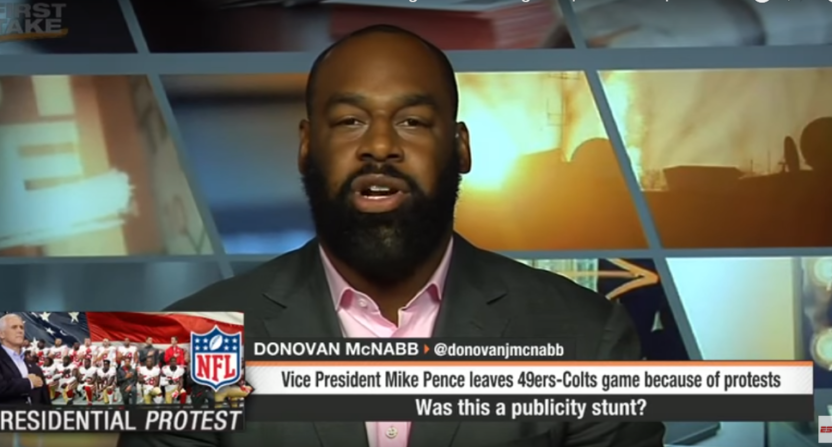 After a monthlong investigation, ESPN has now decided to permanently cut ties with McNabb and Davis, as per John Ourand of Sports Business Journal:

ESPN cut ties with Donovan McNabb and Eric Davis following a monthlong investigation into allegations of sexual harassment at another network. Last month, ESPN suspended the two former NFLers from appearing on air after they were named in a lawsuit filed by a wardrobe stylist at NFL Net. In the lawsuit, McNabb was accused of sending inappropriate text messages, while Davis was accused of rubbing his body against the woman and engaging in lewd talk.

…McNabb had appeared on ESPN shows like “First Take” and has co-hosted a show for ESPN Radio on weekends during the NFL season. Davis co-hosted an ESPN L.A. Radio show with Marcellus Wiley and Kelvin Washington.

Here are the specific allegations against McNabb and Davis in that lawsuit, which was published in full in Deadspin on December:

[…]Former on-air talent on NFL Network, Eric Davis, came into Plaintiff’s office pretending to ask for help with his clothes so he could grab and push/rub his body against Plaintiff. Mr. Davis made lewd comments to Plaintiff in her office and while on set, such as, “when are we going to spend time together?” “I want you so bad,” “my cock is so hard because of you right now,” “you look like a woman who knows what to do in bed,” “you look like you would be an animal in the sheets,” “[Mr. Davis] loved really rough sex and would love to be able to spank [Plaintiff] so hard it would leave marks,” “can tell you like it rough and would love it.” Mr. Davis also asked Plaintiff to have rough sex with him, and said that he wanted to choke Plaintiff from behind until Plaintiff begged him to stop. Also, while Plaintiff was working on set on a ladder, Mr. Davis grabbed Plaintiff’s behind, slid his hand between Plaintiff’s legs, and touched Plaintiff’s privates, while saying, “I can’t handle your ass it is so luscious.” When Plaintiff slapped his hand away, Mr. Davis aggressively told Plaintiff to never push his hand away again.”

It’s perhaps somewhat surprising that it took a full month for ESPN to decide to part ways with McNabb and Davis, but the holidays may have slowed down the investigation, and they’re taking permanent action faster than either NFL Network or The Ringer did. Weinberger is still suspended, as are NFLN’s Marshall Faulk, Ike Taylor, and Heath Evans. Now, McNabb and Davis weren’t prominent figures at ESPN overall, and these allegations didn’t involve anything during their time at ESPN, so it’s perhaps easier for the network to simply move on than it is for either NFLN or The Ringer.

It’s maybe notable that that this is the latest step in what’s been an odd sports media journey for McNabb. He started his broadcasting career at NFL Network in 2012, and then was one of the initial members of Fox Sports 1’s Fox Sports Live athlete panel in 2013, a part of the show that soon went away before the show itself went away and even the network changed its name. He quietly resigned from Fox Sports in 2015 after being suspended over DUI charges and sentenced to 18 days in jail. (This was following a previous DUI arrest and one day in jail in 2014.) McNabb also hosted a NBC Sports Radio show at that time, and was listed as “on leave.” He became beIN Sports’ lead college football analyst in August 2016 and also joined ESPN Radio that month.

At that time, he told Billy Penn’s Dan Levy he was grateful for the second chance:

When you make mistakes, obviously there’s consequences with it. Obviously I’ve acknowledged the mistakes that I’ve made and I apologized for it and I know that’s not going to happen again. But when you step away from a job that you truly enjoy doing — I was working at Fox and all the other networks I was a part of after retirement — you feel that drive of continuing on. It’s sort of unfinished business for me. ESPN gave me that opportunity when other networks were there, but nervous about making that decision early on because of the scrutiny they may feel they’d get.

Everyone makes mistakes. I’m so excited at getting this opportunity to work with ESPN and get back on track and get more involved in sports and being able to talk about them.

We’ll see if this is the end of McNabb’s media career or if he winds up at another media outlet down the road.