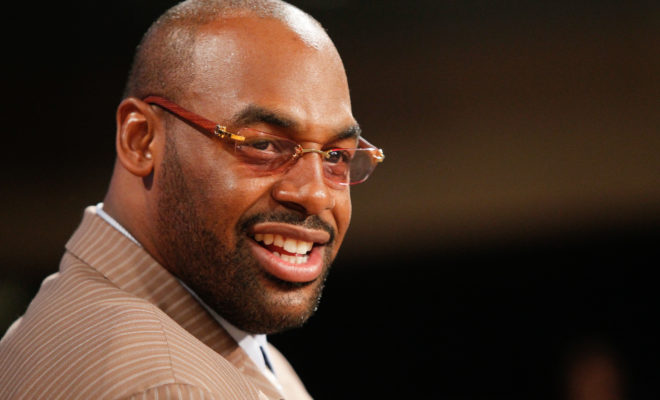 When we last heard about former NFL quarterback Donovan McNabb, it was over losing gigs with Fox, FS1 and NBC Sports Radio over a DUI arrest and spending 18 days in jail. Since then, McNabb has kept a low profile in hopes of landing another broadcast job. Well, he has and it will be with ESPN Radio starting Sunday, September 11 at 10 p.m. He’ll co-host “McNabb & Custer” with Showtime boxing host Brian Custer throughout football.

McNabb’s show is part of a revamped weekend lineup for ESPN Radio which will be in place for college football and the NFL. For McNabb, the ESPN Radio show is a resumption of his broadcasting career. He told BillyPenn.com that he acknowledges that he made mistakes and he’s happy that ESPN gave him a second chance:

When you make mistakes, obviously there’s consequences with it. Obviously I’ve acknowledged the mistakes that I’ve made and I apologized for it and I know that’s not going to happen again … ESPN gave me that opportunity when other networks were there, but nervous about making that decision early on because of the scrutiny they may feel they’d get.

Everyone makes mistakes. I’m so excited at getting this opportunity to work with ESPN and get back on track and get more involved in sports and being able to talk about them.

And he’s looking forward to talking about the NFL and other sports in a timeslot that will recap all of the games from the day:

That’s what is going to be fun about the Sunday night show. It’s not just going to be football based. We’re going to talk about all the hot topics, what’s hot at that particular point, and roll through it.

And his view dealing with the national media as opposed to local media, i.e., Philadelphia media:

…It becomes a bigger story nationally then it is really regionally where you at, and so that was something the Philly media couldn’t understand. ‘Why is he talking so much to national media?’ I’m telling them the same thing I told you, it’s just that you think it’s just a normal answer or, ‘he’s lying’ or whatever, and then all of the sudden it’s a national thing and they’re like ‘well, he talks to them more than he talks to us.’ I see you every Wednesday and every Sunday. That’s my press conference, every Wednesday, and then I talk to you after the game. So if I sit down with an ESPN or if I sit down with a Fox or an NFL Network to talk about what’s going on, ‘well, why doesn’t he sit down with us?’ Well, I’m here. You talk to me at my locker every day. What’s the difference?

McNabb certainly has his opinions and ESPN Radio hopes this will translate into some hot takes on his new show when it launches next month.