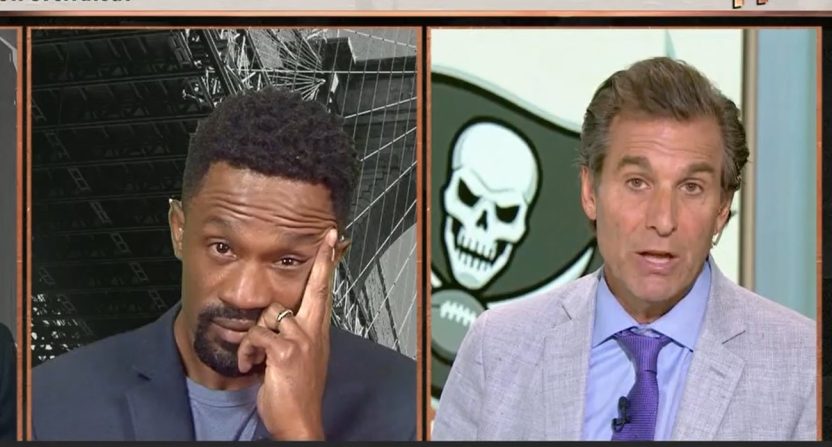 Watching film in preparation for @FirstTake tomorrow against @MadDogUnleashed ? pic.twitter.com/uAAoV9mdv3

In his first minute on the show, Foxworth claimed he was a better basketball player than Bob Cousy, Derek Jeter was the Robert Horry of Major League Baseball and Larry Bird was not a top-five NBA small forward. Five minutes later, Foxworth offered to eulogize Russo during a debate about Tom Brady vs Aaron Rodgers.

But that’s football. Can we really expect Russo to hold his own against a former NFL cornerback? First Take came back from a commercial break and kept Foxworth on the show to discuss Kevin Durant and the NBA. Expectedly, Russo isn’t fond of Durant’s desire to seek a better fit for the next years of his career than the one he currently has with the Brooklyn Nets.

“I can tell you the difference. You’re Chris “Mad Dog” Russo,” Foxworth argued. “You have a certain amount of value. You are not no damn Kevin Durant. Your value is not that. You are not LeBron James, you ain’t none of them dudes! You have a certain amount of power, you have more power and leverage than I do! But I’m not gonna complain because Mad Dog’s allowed to do stuff that I’m not allowed to do because I’m not as valuable as you. So get out of Kevin Durant’s way. You ain’t him!”

During the segment, Russo blamed NBA players for agreeing to a CBA that has a salary cap. Imagine Russo’s take if NBA players decided to strike until league owners agreed to drop the salary cap? No chance he would support the players for even one day of their labor dispute.

“I could teach you about negotiations and leverage if you want to,” Foxworth (a former NFLPA president) said. “Or I could just cook you on TV like I’ve been doing for the last 30 minutes.”

Seems like @MadDogUnleashed brought his b-game today cause @stephenasmith not here. That was a mistake. Hope he’s using this break to get his mind right. pic.twitter.com/1eGwn0NNeD

Oh damn. But also, no lies detected. Foxworth brought relevant facts and rational opinions to every debate with Russo on Wednesday.

Credit Russo for two things, however. For one, he took every jab to the chin with a smile. In an industry where so many older hosts and hot take artists take themselves way too seriously, Russo’s not afraid to get chided or laughed at instead of laughed with. Imagine Mike Francesa sitting there and taking this type of verbal beatdown? Or even Stephen A. Smith? Francesa would have left during the commercial and refused to do another segment with Foxworth. But Russo just kept coming back for more.

The second thing Russo deserves credit for is his ability to turn every single debate into a conversation that fits his comfort zone. He turned ‘is Lamar Jackson a top-10 quarterback?’ into Joe Montana vs Dan Marino less than five minutes into the debate. Frustrating for Russo’s opponent and maybe even the audience, sure. But it works great for him.

While Foxworth tried to argue with facts and relevant talking points, Russo stuck to ‘How many playoff games did he win?’ Or ‘He’s not better than this dude from five generations ago.’

“This is the crux of all my disagreements with you,” Foxworth finally ranted. “Just cause something was first or early, doesn’t mean that it hasn’t gotten better. Do you understand the concept of evolution? It just happens, things evolve and improve.”

And Foxworth is evolving into a superstar for ESPN.