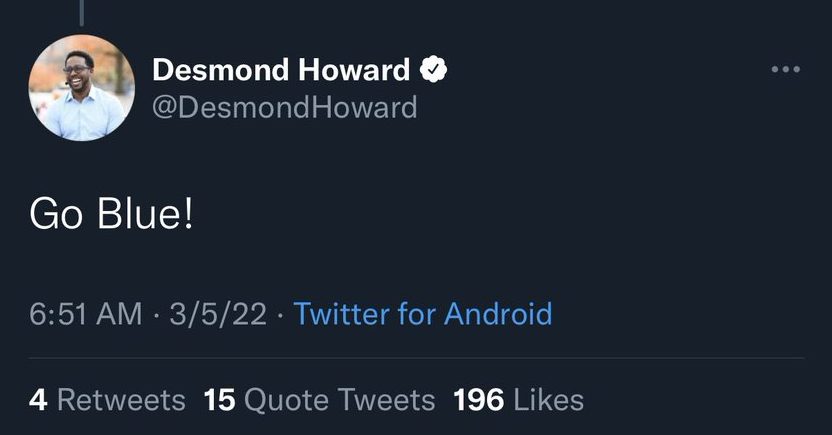 ESPN’s Desmond Howard is developing a reputation for making his thoughts public before stopping and checking, “is this a good idea?” He can add another one to the list for a since-deleted tweet early on Saturday.

Friday night, ESPN college football announcer Chris Fowler tweeted out a photo of a Memphis bridge lit up with the colors of the Ukrainian flag, a show of support for the nation currently at war with Russia. All across the world, cities are showing their support for Ukraine by lighting up local landmarks in their colors.

While there was no caption on the tweet, it stands to reason that most people either understood what it meant or took a moment to figure out why the image was so noteworthy.

Not Howard, apparently, as the former Michigan Wolverines player took the opportunity to turn it into a moment for his alma mater, which features similar colors. In a now-deleted tweet, Howard simply responded, “Go Blue!” 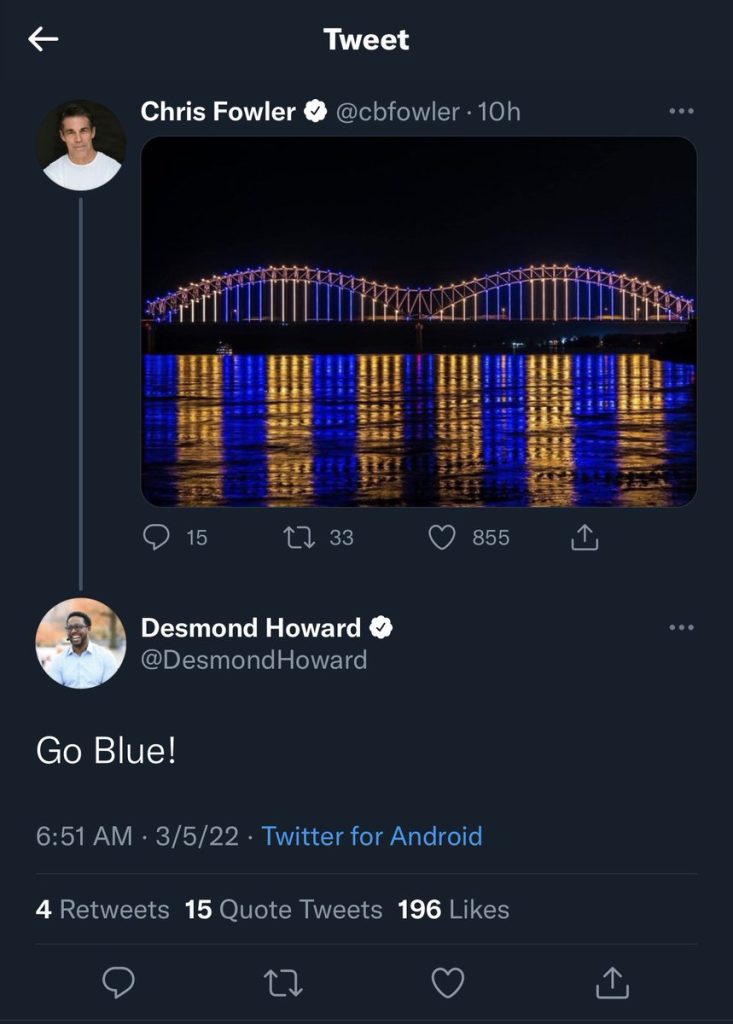 As for why Howard felt the need to go with that, we appear to find ourselves in a classic “dumb or jerk?” situation. Either Howard was being dumb and just didn’t put two-and-two together for some reason. Or he was a jerk because he took a genuine instance of humanity and turned it into a bit. It’s also possible that he’s both, but he can’t claim that he’s neither. So we’ll see what he ends up going with when the eventual apology is issued.

As we mentioned above, this isn’t the first time Howard has gotten himself into trouble by just saying (or writing) the first thing that came into his brain. There was his “Is Desmond Howard gonna have to choke a bitch?” bit gone wrong on College GameDay. His lazy “old man yells at cloud” routine when he and Kirk Herbstreit blasted modern college football players for being “entitled” and not loving the game because some of them opt out of bowl games.

And of course, there was the other instance when Howard invoked his alma mater at the wrong time when he took a shot at Ohio State’s offensive lineman while standing next to C.J. Stroud during the Heisman Trophy ceremony. Howard’s “apology” afterward was of the non-apology variety.

We’ll see if Howard ends up apologizing or explaining himself, again, but in the meantime, his tweet made the rounds on Saturday and earned plenty of reactions all its own.

This is idiotic even by Desmond Howard standards. pic.twitter.com/jFNyRmJg0R

“The University of Michigan is more popular than I thought!”
-Desmond Howard pic.twitter.com/0NwoCH8Git

when my offline friends ask me why im on twitter so much: pic.twitter.com/FzashY11NX

Desmond finally deleted his tweet. But that's ok. Everyone has receipts.

Dez, this video is of the flag I have outside my home right now, with video I took today. If you want to consider this a Wolverine flag, you go ahead and do it.

We all get it, Desmond. You went to Michigan. Good for you.