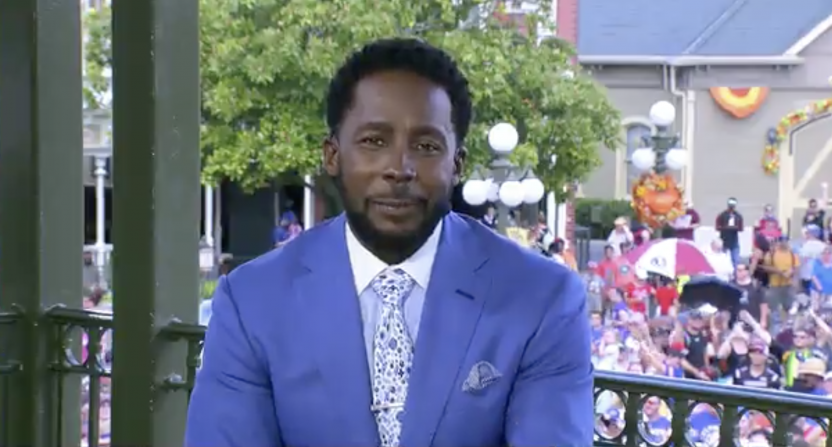 Before today, many just figured having College GameDay at Disney World might be the worst part of the show. And then Desmond Howard tried to make a joke and things went downhill from there.

In a discussion about if Michigan can beat Ohio State this year, the Michigan alum made a reference to Chappelle’s Show where Howard joked, “Is Desmond Howard gonna have to choke a bitch?” Seemingly awkward laughter from Rece Davis ensued while Lee Corso and Kirk Herbstreit just smiled. It got to be cringeworthy pretty quickly.

The origin of the reference was from a sketch where Dave Chappelle was hanging out with Wayne Brady and Brady was doing things like dealing drugs and pimping that would be the complete opposite of the more clean cut image many perceive him to be, like Paul Mooney, which was the motivating factor of the sketch.

The problem here is that Howard assumed that everyone understood the reference (never do that) and made the joke. So if someone has never seen Chappelle’s Show, that comes way out of left field and sounds like Howard’s promoting violence against women. Even knowing the reference, this comes out of left field. Just a strange thing to say in the context of Michigan and Ohio State football.

Chappelle’s sketch works because it actually had logic and meaning behind it and the audience understood the context of the joke and the sketch. That, and having Wayne Brady act that out in an absurd and over-the-top way, made that work. Even though violence against women isn’t anything anyone should ever do and on its own, isn’t funny.

Later on GameDay, Howard made one of those “Sorry if you were offended” apologies that isn’t really an apology. It was kinda like one of those required apologies that a commentator makes when bad language gets on a broadcast. Howard didn’t even explain the context that well because all he said was he was a Wayne Brady fan and that it was meant to be a joke. So people still aren’t really aware of where the context came from if they aren’t aware of Chappelle’s Show. From now on, unless it’s a reference from College GameDay, lay off the referential humor because there’s a good chance not too many people will know what you’re talking about.

UPDATE: Desmond Howard retweeted Deadspin’s clip of the reference making note that he said “Djokovic” referencing Robert Flores’ take on the line saying “Is Wayne Brady gonna have to Djokovic.” While it’s certainly more SFW and appropriate, it seems like an even more obscure reference (even to an ESPN audience) and it’s tough to hear what word was said.