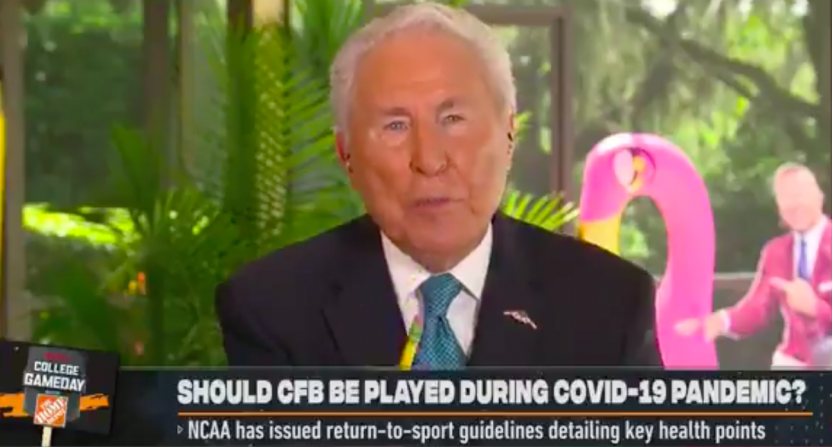 When you think of people who are unabashed ambassadors and proponents of college football, there is perhaps no one quite like Lee Corso. The longtime College GameDay analyst has made an ESPN broadcasting career out of channeling his excitement and passion for the sport in a way that audiences have always found infectious and fun. Not even a stroke has stopped the 85-year-old former coach and he continues to appear on ESPN’s flagship college football program and make appearances at all the major college football games and events they cover.

So it stands to reason that if anyone is going to push for college football to return ASAP, you’d have to imagine it’s going to be the guy who makes a living wearing mascot heads every weekend. As Corso himself might say, “Not so fast, my friend.”

Saturday, Corso surprised many by saying that he not only supports the decision by the Big Ten and Pac-12 not to play college football this season but he also thinks football should not be played until 2021.

Many wondered if Lee Corso would return to Gameday this season. The ESPN institution is indeed back and his opinion on the Big Ten and Pac 12’s decision to not play football this fall may surprise you. pic.twitter.com/2LbrQTSGQB

“I agree with the Big Ten and the Pac-12 by not playing college football this season because of the ‘What ifs.’ Basically, there are a number of people, thousands of people involved in college football. I would not play football until February 2021.

“I’ll tell you what: The National Football League season would be over and the emphasis on college football [would be higher]. I’d play an abbreviated schedule, and maybe in 10 weeks begin again. I’ll tell you what: I’d rather err on safety than chance. The virus is very serious, and I take it that way.”

Corso wasn’t alone in the sentiment. Fellow analyst Desmond Howard tentatively agreed, saying that if his sons were on college football teams right now, he would prefer that they did not play. He also noted that COVID-19 is impacting Black Americans on a higher scale than others, and given the fact that Black athletes make up 50-60% of college football rosters, that should be a reason to err on the side of caution and for players to consider opting out.

“You can’t throw a blanket on it because you have medical experts on both sides arguing both points: Why they should be playing and why they should not be playing. We’ve seen doctors from different universities make these big statements and then start to retract those statements. So I understand; you really can’t make a blanket statement.

“Personally, I have two sons too. Now, they’re not in college right now, but I would have to say that if they were, I would err on the side of caution and do probably what [Big Ten commissioner] Kevin Warren and [Pac-12 commissioner] Larry Scott did with their conferences. I would do [it] with my sons and tell them that they couldn’t play for the simple fact that you’re dealing with too much medical uncertainty at that point and too many unknown health risks.

“When you look at the numbers too … COVID-19, it affects Black Americans at an unusually high and disproportionate rate than other segments of our society. And when you look at the numbers among the kids who have opted out, 60 kids have opted out, David, 60. Eighty percent of those kids are Black. So I would have erred on the side of caution with my sons, and we would’ve sat this one out.”

Per The Athletic, the number of college football players who have opted out of the season, as of Saturday afternoon, is actually 91.

The idea that multiple hosts of ESPN’s College GameDay would call for a pause on the college football would seem unthinkable, if not for everything that’s come before this weekend in 2020. As the effects and unknowns of COVID-19 continued well past the initial expectations and remain at dangerous levels, the Big Ten and Pac-12 seasons remain postponed, though there has been discussion about starting a conference-only season at a later date. Meanwhile, the ACC, Big 12, Conference USA, SEC, Sun Belt, and a handful of independent schools are moving forward with truncated or hastily reworked schedules for the time being.

Some may decry Corso and Howard of inserting politics into ESPN’s programming and violating the stupid “stick to sports” mantra, but that only makes sense if you think asking for caution and care on behalf of college football players is considered a political act.