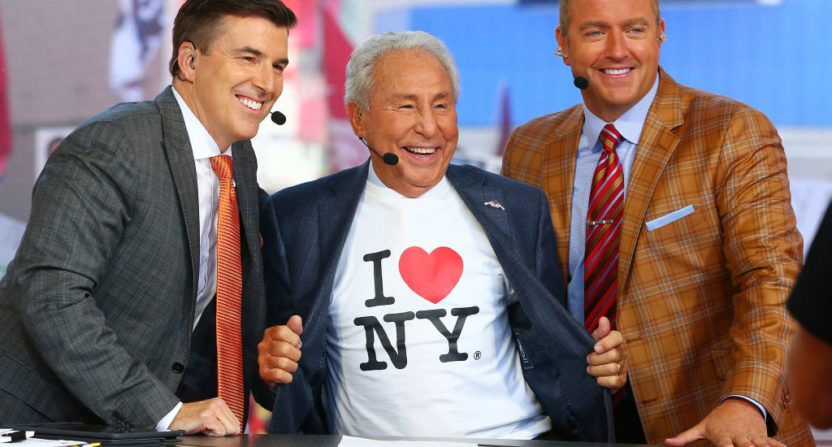 Lee Corso still appears on College GameDay every week, three decades after he helped launch the show, but for the 82-year-old analyst, it’s not quite as easy as it used to be.

We learned from the Associated Press in August that the GameDay crew has learned to help Corso on and off the air, eight years after he suffered a severe stroke, and a Washington Post profile published this weekend lends some further insight. Per the Post, he types up a script for each GameDay show with help from an assistant. That allows him to find the right words and remain focused in his commentary.

The script, which Corso had been working on since Monday, was almost exactly what he planned to say on Saturday’s broadcast, and he’d been learning his lines all week. It’s a necessity nowadays, eight years after he suffered a major stroke that makes it difficult for him to talk — sometimes his speech is slightly slurred and he mispronounces words. He may hesitate or stutter at the start of a sentence, and he can’t ad-lib on air like he used to. But he can memorize a script, and that helps Corso, 82, stay on track.

Corso told the Post he is thankful he is still able to do GameDay but that it’s frustrating to not have the same ability to speak off the cuff that he did before the stroke.

“It hurts me not to be able to communicate like I used to,” Corso said quietly Friday morning. “I used to be pretty good at coming back, you know, quick one-liners. I don’t have spontaneity, I can’t do that as much now. … Every single week, I memorize the show, so that when I get on, I can actually do it. It gets frustrating, because I want to be able to be like I was. But the doctor told me about two or three weeks after, he told me, ‘Lee, you’ll never be the same. You might as well adjust to how you’re going to be.’ I haven’t. But I was determined to get back on television. I wanted to get back.”

Even if Corso is not quite as sharp on set as he once was, he remains a pleasure to listen to, and his weekly headgear bit will be iconic long after he stops doing it. If a script is what it takes to keep Corso on GameDay every Saturday, then thank goodness for that script.