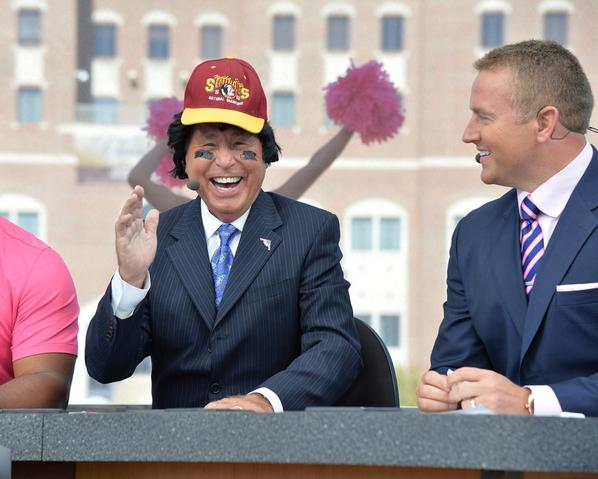 Lee Corso has been an institution for ESPN and College GameDay for decades. He’s been one of the central reasons why GameDay has been one of the top two studio shows (along with TNT’s Inside the NBA) for years. And at 82 years young and overcoming a stroke, Corso’s continued presence has been an inspiration for college football fans across the country. How many people can hold a crowd of thousands in the palm of their hand by putting on a certain mascot head?

The AP has a profile of Corso and College GameDay the week before the new college football season gets fully underway. In the profile, Corso’s GameDay colleagues open up candidly about their support for him. While Corso may struggle at times on air with certain topics or pronunciations as a result of his stroke, his on-air and off-air colleagues are there to support him each step of the way.

Now 82 and eight years removed from a stroke, Corso is back for a 30th season on “College GameDay.” He can still energize college kids on a Saturday morning like a free-beer tailgate, and for millions of viewers the games don’t begin until he dons a mascot head and picks the day’s marquee matchup. But getting Corso through a show also requires some help, both on the air and behind the scenes. At times his contributions are off topic. Names come out wrong. Words can escape him.

Herbstreit, Rece Davis, Desmond Howard, David Pollack and the rest of the “GameDay” crew have adjusted. Instead of Corso’s limitations hindering the show, they make it more compelling. It feels real, not staged, and for live TV, that’s usually a good thing

“To this day there’s no question in my mind that all the great things that coach adds to the show outweigh those times when his tongue may get tied or he stumbles on his speech or he stumbles over a few words or has trouble getting something out,” said Lee Fitting, a longtime “GameDay” producer who now oversees all ESPN’s college studio shows. “And the times when he does struggle to get some words out, the way in which Kirk and Rece and Desmond and David help coach along, pick up that slack, makes up for it.

“It’s endearing to the viewer. It’s the family members picking another member of the family up.”

It’s an uplifting story because the easy thing to do would be to see Corso ride off into the sunset. However, ESPN has stood by him through his health battles and even signed him to another contract extension earlier this season. And the way the likes of Herbstreit, Howard, Davis, Pollack, and others are there to pick up Corso is something that pretty much everyone watching can relate to while watching.

In that announcement of his re-signing, Corso said that his College GameDay job was “the best medicine” for him and the excitement and enthusiasm he has for the sport are just as infectious now as they have ever been. This season he will make his 300th mascot headgear pick and we all know there will be many more highlights like this in the 2017 campaign.