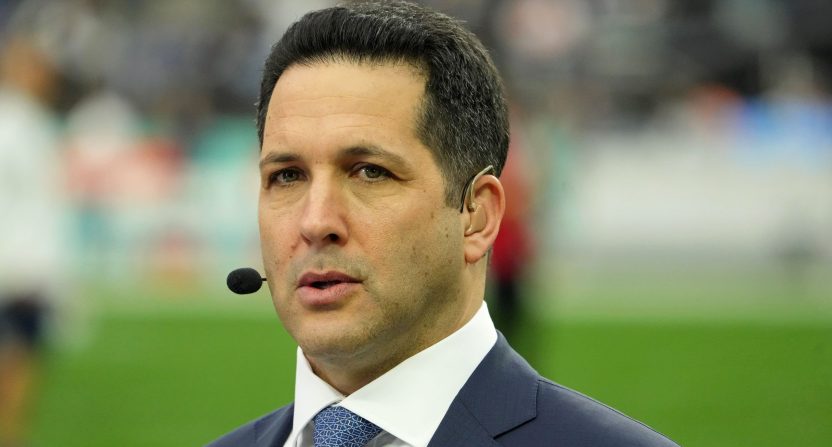 Monday, Schefter broke the news that longtime NFL wide receiver Danny Amendola was retiring and entering “initial talks” for a media career. While Schefter’s tweets made the rounds, the tweet he initially sent and deleted seemed to imply that the ESPN NFL insider was still looking for someone to sign off of his reporting.

Schefter’s original tweet was identical to the one he ended up posting, except for the inclusion of “Work?” up top.

It’s not too hard to read between the lines and assume that the initial version was copied and pasted from some kind of sign-off request, either to one of Schefter’s editors or to Amendola or his reps.

Given Schefter’s spotty history and a recent profile piece that seemed to imply he hadn’t really learned too many lessons, it’s understandable that many would assume the ESPN personality was still getting the green light on his reporting from sources before hitting send.

Adam asking Amendola’s agent “does this work?” before posting a tweet is next level scoopage

Apparently yes, this tweet did work for Danny so Schefter got the go-ahead to tweet it out ? pic.twitter.com/4LbAm58IvA

You really run every tweet by the agents/player before you send it, don’t you? pic.twitter.com/GzfO2YrSQJ

We’re you asking his agent “Does this work?”

It also doesn’t help Schefter’s case that the final two-tweet announcement about Amendola reads as it came directly from his agent. There’s a mention of “multiple teams calling this offseason” for a 36-year-old wide receiver coming off a subpar season in which he only played eight games. And the second tweet creates some juice for Amendola in his quest to pursue a media career.

The final line of the second tweet reads “He has multiple relationships and respect from around the league and is ready for the next challenge,” which is the kind of unnecessary addition that only Schefter would include.

“Multiple relationships?” What does that even mean?

Is it possible that Schefter was getting approval from someone internal? Of course. Is it possible that Schefter accidentally wrote “Work?” and there’s a simple explanation? Sure. But given the long history of questionable editorial and journalistic decisions that he’s put forth, Schefter no longer has the benefit of the doubt in these situations. And it’s a reminder that while he’s extremely good at what he does, what he does still appears to come with a lot of strings attached.

Not to mention a lot of chocolate gifts.