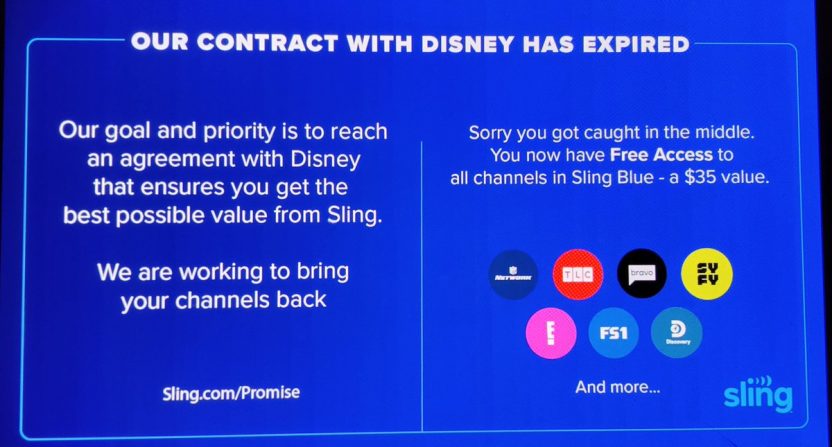 Dish Network and Sling TV subscribers hoping to get a jumpstart on their college football viewing Saturday morning were met with a rude awakening when every Disney-owned channel disappeared from both services overnight after the two companies failed to meet a carriage-renewal deal on Friday.

The list of networks currently unavailable to subscribers includes all ESPN networks, FX, and ABC local stations in eight markets. As it stands, subscribers will miss out on a ton of college football on Saturday as well as Monday Night Football on ESPN and the MLB playoffs if the dispute carries into next week.

Dish released a statement overnight, saying that Disney is “holding viewers hostage” and that their demand of “nearly a billion dollar increase” is untenable.

Disney and Dish are in a standoff during football season, which will surely make a lot of subscribers happy this weekend!

Here's the opening of the Dish statement, emailed at 2:49 AM ET: pic.twitter.com/E72A5ClYJr

“Disney has exploited its market position to increase fees without regard for the public viewing experience,” Dish TV executive vice president and group president Brian Neylon also said in a statement.

Dish has also claimed that Disney is attempting to bake in costs to help Disney+ and ESPN+, which are not part of a Dish subscription.

Meanwhile, Disney released a statement of its own, taking a much more formal approach.

“After months of negotiating in good faith, Dish has declined to reach a fair, market-based agreement with us for continued distribution of our networks,” reads the statement. “The rates and terms we are seeking reflect the marketplace and have been the foundation for numerous successful deals with pay TV providers of all types and sizes across the country. We’re committed to reaching a fair resolution, and we urge Dish to work with us in order to minimize the disruption to their customers.”

Sling TV viewers trying to watch a Disney-owned network are now greeted with a video explaining to them that an agreement on a contract renewal was not reached.

This video is posted on Sling now. pic.twitter.com/UwUvFr0puS

This is not the face you want to see on your DISH service!!! This time we’re out of all ⁦@espn⁩ channels. pic.twitter.com/oxblMT6Tbs

This marks the second major carriage blackout for Disney in the past year, following their dispute with YouTubeTV in December. They almost found themselves in a similar dispute with AT&T and DirecTV in 2019 but that crisis was averted.

Dish, however, also has garnered a reputation for aggressive negotiating tactics with networks and content companies and has weathered extended disputes before in order to gain terms they deem more favorable. They recently dealt with carriage disputes with TEGNA, Sinclair, NBC Sports, Capitol Broadcasting, Nexstar, NFL Network & RedZone, and Fox.

Meanwhile, as millions of college football fans tune in to find that they don’t have the ability to watch their favorite team, the conferences and schools are telling viewers to find alternate means of watching.

If you are a @dish or @sling subscriber, you no longer have access to SEC games and coverage on @espn or @SECNetwork.

#CardNation, if you are a @dish or @sling subscriber, you do not have access to watch today’s @LouisvilleFB game at Boston College on @espn family of networks.

The carriage dispute is said to affect around 10 million subscribers split between Dish and Sling TV. More details to come as they’re reported.