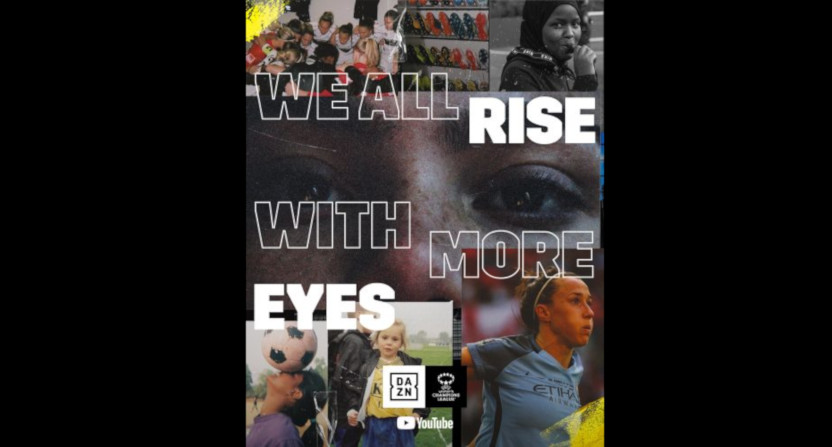 Perhaps the most interesting element of this week’s deal between DAZN and the UEFA Women’s Champions League is how much of it will be on a sport-specific DAZN YouTube channel rather than DAZN proper. The deal is a four-year global one (minus the Middle East and North Africa, where DAZN will only have highlights rights, and minus China and its territories, where they don’t have that), but all matches from its first two seasons (2021-22 and 2022-23) will air on DAZN’s YouTube channel for free. The last two seasons of this deal (2023-24 and 2024-25) will see all 61 matches on DAZN each year, but 19 of them will also be available for free on YouTube. Here’s more from that release:

DAZN, the leading global sports streaming platform, has acquired global rights to broadcast the UEFA Women’s Champions League and has been awarded host broadcaster duties for the next four seasons, from 2021-25. As part of this landmark agreement, to further grow the sport, DAZN has also entered into a groundbreaking partnership with YouTube that will make the competition live and free for fans around the world for the first time. This trailblazing move marks the first time UEFA has centralized all Women’s Champions League matches globally.

…The multi-year deal grants DAZN exclusive rights worldwide, with the exception of the MENA (Middle East and North Africa) – where rights do include clips and highlights – and China and its territories. The agreement is one of the largest broadcast deals in women’s club football history and signifies another game-changing move in DAZN’s long-time global commitment to women’s sport, centered on the mission of growing the UEFA Women’s Champions League, turning more players and teams into household names, and inspiring the next generation of players – all of which starts with more people around the world watching the game.

…James Rushton, Co-CEO, DAZN Group: “DAZN is thrilled to be the new global broadcaster for UEFA Women’s Champions League and cannot wait to work with YouTube and Google to bring fans closer to the game and shine a brighter light on its stars than ever before. DAZN was founded with a vision of making premium sports more accessible, and what’s more accessible than centralised rights for the first time and all matches free on YouTube? Overnight, this will make the best women’s football easier to watch around the world than ever before. Along the way, we look forward to elevating live broadcast production, extending existing DAZN content franchises, and unveiling new shows that showcase the breadth and brilliance of women’s football.”

Cécile Frot-Coutaz, Head of EMEA, YouTube: “YouTube is the global go-to destination for premium, diverse and relevant content. The pandemic has created a lot of uncertainty for sport but particularly for women’s sport. We are therefore honoured to be able to partner with DAZN and UEFA to bring the UWCL games to fans all over the world, live and for free on YouTube. We are excited to be able to bring the power of YT’s platform to the UEFA Women’s Champions League and help women’s football connect with new and existing fans the world over.”

DAZN also put out this video on this deal:

DAZN has shown interest in women’s soccer in the past, including with deals with women’s soccer players, but this is a big jump up. And it’s interesting and notable that it’s a mostly-global deal rather than one in specific territories. That speaks to the global strategy DAZN has been focusing on recently, especially since former Disney and TikTok exec Kevin Mayer took over from John Skipper as executive chairman in March. They have a strong presence and strong rights lineup in many countries, which is much stronger than their U.S. presence at the moment, so it makes some sense for them to try and make some global deals they can use in all of the 200-plus countries they’re currently in (and possibly sublicense to others in other areas). YouTube is also a smart partner for a global approach, as they have a significant presence in most countries.

Moreover, the UEFA Women’s Champions League seems like a logical entity to do this kind of YouTube-first, pay-subscription-later deal with. That competition has been going since 2001 (when it was called the UEFA Women’s Cup), and it’s been well-followed by existing women’s soccer fans, but it’s been harder to get it into wider awareness. And some of those struggles have been thanks to inconsistent past broadcasting deals.

With this approach, DAZN is betting that they can draw in some new fans during the years where most matches will air on YouTube, then convert those fans into paid subscribers in the last two years when most matches move to their own over-the-top streaming platform. It’s also a way for DAZN to increase their own brand recognition, which could be helpful for their content from other sports. We’ll see how this deal works out for them, but it’s definitely an interesting idea.