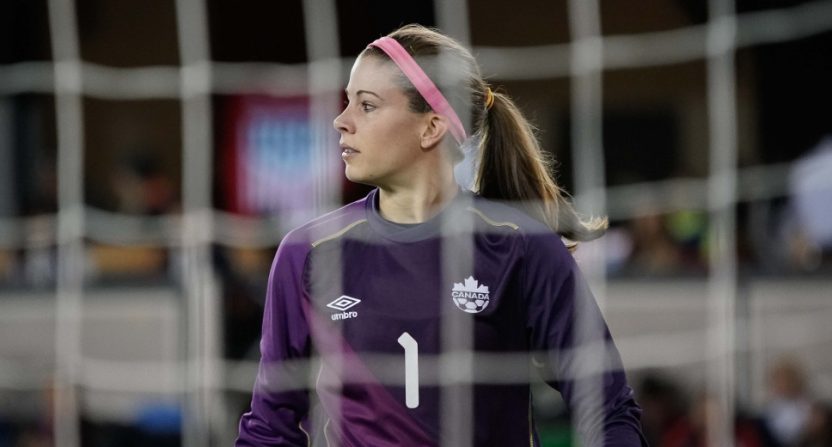 One of the more interesting soccer stories in recent months has come from Canadian national women’s soccer team goalkeeper Steph Labbé, who recently tried out for the men’s Calgary Foothills’ Premier Development League squad, won a job, and then was prohibited from playing by the United Soccer League because of her gender. (She’s now taking legal action against them.) But Labbé has some other interesting things going on. She’s received several offers from European women’s clubs, and is likely to sign with one in July. But before that, streaming service DAZN is sending her to watch the men’s and women’s UEFA Champions League finals, along with multisport Canadian Olympian Georgia Simmerling:

I’m SO EXCITED that I don’t have to keep this a secret anymore.. @gsimmerling and I are GOING TO THE CHAMPIONS LEAGUE FINALS courtesy of @DAZN_CA ??✈️⚽️?

An amazing company who wanted to give us an incredible sporting experience… WHAT A DREAM! ? pic.twitter.com/WJvMbFB4sq

The women’s Champions League final takes place Thursday between Wolfsburg and Lyon, while the men’s final is Saturday between Real Madrid and Liverpool. Labbé said she’s thrilled to get a chance to watch these matches.

“Number one, I’m an elite soccer player but I’m also a huge fan of these sports events, and for me to have the opportunity to be able to go see the men’s and the women’s finals as a fan first and foremost, that’s amazing. To be a fan in that atmosphere, to be able to witness the pinnacle of club professional soccer, that’s amazing in itself. …Being able to go and see the best of the best and being inspired by the professionals playing and by the game. Just to witness it in person and see the talent in person right in front of you, it’s a once in a lifetime opportunity.”

Labbé said watching the women’s final will be particularly interesting, as one of her Canadian national team teammates is involved.

“The most interesting for me is that we’ll have one of our Canadians playing in it. Kadeisha Buchanan will be playing for Lyon, she won the Champions League with them last year, so for her to be going in the final again to look to win back-to-back Champions League titles, that’s incredible. She made history last year as the first Canadian to win it; for her to have the opportunity to do it again is incredible. So I’m super excited to be able to go and see it and see that live. To support one of my teammates and friends will be a cool opportunity.”

The women’s final doesn’t always get as much attention as the men’s match, but Labbé said it’s a fantastic game, and one she can’t wait to see.

“It’s the same as the men, you know? It’s the pinnacle of club soccer, and it’s what every female soccer player dreams of doing in their career, the Champions League final. For me to be able to go and watch it, I know it’s going to be an amazing experience.”

On a personal front, Labbé said it was unfortunate that she wasn’t allowed to play in the men’s PDL, but she’s moving on from it.

“It was a big shock, and a disappointment, of course. It would have been easier to handle if I was told I wasn’t good enough or fast enough or strong enough, something I could have went home and worked on. But for it to be something that I can’t control, that was a tough pill to swallow. But from Day 1, I haven’t had any regrets. My motto for my entire life has always been everything happens for a reason.”

“So, any time things aren’t going well, I always remind myself, ‘There’s a reason why this is happening, there’s a reason why it’s happening right now, there’s a reason why you made this decision to come here and why you’re hitting this obstacle.’ I don’t always know what the reason is, but I’m always grateful and hopeful. I know for example that this opportunity wouldn’t have come, and some of the professional opportunities that are coming up in my near future, those wouldn’t be there. So I’m going with the flow and completely just living in the present, enjoying what’s happening and continuing to build and prepare for my future.”

She said her next professional move is likely joining a European women’s team.

“I’ll probably be heading back over to Europe in mid-July.”

Labbé said even if she wasn’t allowed to compete with the men in the long run, trying that has helped her own game.

“I’ve always trained with the men in the offseason so I know how much it pushes me, but for me to have been here since March, day in and day out with these guys, has been tremendous for my career,” she said. “It’s incredible how much I’ve adapted and how much my body has changed. The only words that I can use to describe it is that I just feel like a beast on the field. I feel so dominant, and it’s completely changed who I am as a goalkeeper, confidence-wise, skill-wise, tactical, everything. I just feel like I have grown so much in so little time, and I’m so grateful for the opportunities I’ve had to be able to train with them and fight for a spot and play in some preseason games. I cannot wait to go into the women’s game and show how much I’ve grown and developed.”

And she said she’s excited about the future of Canadian women’s soccer, and about her own role in that.

“In 2012, when the girls brought home the first bronze medal, that was a huge turning point for women’s soccer in Canada. For us to do it again in Rio, win back-to-back bronzes, was really massive for our country, to staple ourselves within the top nations in the world. Now, for us, we’re competing with and getting results against the best of the best. And we’ve stated it, our goal is to be #1 in the world, we want to win a World Cup and we want to win an Olympics.”

“For me personally, I want to be a part of that. And I want to push myself to be the best that I can be and to be one of the best goalkeepers in the world to help drive that, help drive our team to number one. I think it’s an extremely exciting time for soccer in Canada, our men’s professional league starting up next year is going to inspire young boys in our country, but I think young girls as well, and it’s going to show them that professional soccer is available and is there and is going to continue to grow. And hopefully a couple years after, we’ll be  able to start a women’s league in Canada and build off that and have that platform for women as well.”