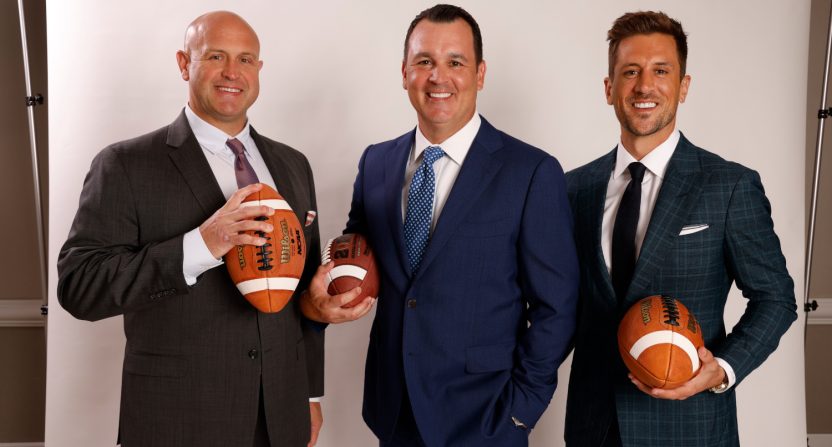 The SEC Network SEC Saturday Night broadcast crew of Tom Hart, Jordan Rodgers, and Cole Cubelic has been together since 2017, and they’re doing something interesting for the second straight season Saturday. Last year, they brought that whole announcing team to the sidelines for the Vanderbilt Commodores–Ole Miss Rebels game. This year, they’re doing so again for the No. 14 Rebels’ game against the Arkansas Razorbacks (7:30 p.m. ET Saturday, SEC Network). Hart (seen at center above, with Cubelic on the left and Rodgers on the right) spoke to AA Thursday, and said last year was an impressive effort pulled together quickly, especially on the production side.

“Our production crew deserves the utmost respect and credit for what they pulled off last year. Our job as announcers was really easy, but the technical aspect of getting the audio right, acquiring the equipment from remote cameras to handheld cameras for a different setup than we typically have is a real challenge for the truck, and that requires a lot of extra work on their part.”

Hart said he expects it will go more smoothly on the technical side this year with more preparation.

“Last year, we kind of threw it together, and made it work; we had to tightrope through some things technically, and people had to work really hard to make sure it came off and there was no hitch, but there were some hitches involved that they just powered through. This year, we’ve got a little bit more technical support, and I think it will make it a whole lot easier on the crew since we kind of know what we’re getting into.”

Hart said calling a game from the sidelines wound up working out great last year, and that angle provides the announcers with perspectives they might not get from the booth.

“Outside the technical aspect, I thought it went really well. The coaches were accommodating. And the way we present it is ‘We don’t expect any extra access from you, but we’re going to be down on the field, and if you want to communicate with us or share anything, we’re more than happy to use that and present it to better tell the story.'”

Here’s one of those clips from last year’s broadcast:

Hart said a key to this is getting to see how the athletes react to plays up close.

“The respect is really what changes everything. I was struck, not just being so close to the action, the size and the speed probably wouldn’t surprise anybody here, but one of the things that has been our focus at ESPN over the years is to humanize these athletes. When you’re down on the field level and you can see right into their eyes, you can see their body language and reaction to a play that goes well or goes wrong, that really hits home. And that’s something that surprised me that I wasn’t expecting to experience on the field for Ole Miss-Vandy last year.”

While announcers can’t see the whole field from the sidelines in a way they could from a traditional booth, Hart said he thinks the tradeoffs can be worthwhile.

“There are challenges, there are also benefits to it. It’s just a matter of perspective. You’re used to, as a football play-by-play announcer, viewing the field in the same way as folks at home. It’s a rectangular box, left to right, right to left. And you know all 22 people are going to be in your line of sight from the booth. When you go down on the field, you lose that perspective, but you gain others.”

“It’s just like fans sitting in different spots in the stadium. If you view a game through the endzone, you all of a sudden have a much better view of the direction of a play is going, how big of a hole the offensive line is opening up. If you view it from the sideline, down on the field level, you have a better appreciation for the speed, specifically blitzing linebackers and how quickly they can converge. I think it’s important to have a better feel and recognition of players and number and body-type recognition. What I’ve found is I use my spotting chart a lot less when I’m down there, I’m just going off of memory. But for every angle that is being taken away from being on the field, two more angles open up.”

Here’s another clip from last year’s sidelines broadcast showing that off:

Hart said one challenge of doing the sidelines broadcast this year is going to be the temperatures in Fayetteville.

“I’m already cold. It’s going to be 25 degrees. We can be divas in the booth with handwarmers and space heaters and layers and maybe even a blanket if we need. Hopefully we’ll find a way to stay warm.”

He said he can’t wait to do this despite that, though, and last year already proved the value of this with the access coaches (especially Ole Miss head coach Lane Kiffin) were willing to grant.

“I’m really excited. The key to this working is to give the viewer something they otherwise wouldn’t get. And the coaches are key to that, and we have great relationships with both staffs. The Arkansas staff we’ve known for years, and it’s a great group of guys. The Ole Miss staff is as outgoing as anybody. Lane came up to me in the second quarter last year and sidled up and gave me back-to-back defensive play calls. The first one, they were going cover zero and sending the house, and after drawing a Vanderbilt offsides, they were going drop-eight. You know, you don’t get that if you’re doing a game in the traditional sense. As long as we can bring more to the table, it’s worth doing these things that are a little non-traditional.”

Hart said his past experience should help him with the cold, too.

“I should be warm enough. I worked the coldest game in Major League [Baseball] history when the Braves were at the Rockies and it was 23 degrees. I think I have the same pair of socks from that game, and hopefully they’ll work again.”

An interesting part of this broadcast is how this SEC Saturday Night crew has been together since 2017, incredible longevity in a sport with often-changing broadcaster lineups. Hart said he, Rodgers and Cubelic have hit it off since day one, and part of that is trusting each other’s preparation.

“The chemistry was instant. The first time I met Jordan, we climbed into a hot tub together; it’s a very complicated story, but it was a television bit. But [the chemistry] is based in friendship, number one, but also respect, accountability. We all have a lot of things going on our lives: Cole and I are parents, Jordan’s just married, Jordan’s got multiple productions that he’s involved with, Cole’s got his radio show, I’ve got other sports.”

“But we know that each one of us is coming to the table having done our work, having done our prep. And that makes a huge difference, just having confidence in the guy next to you; I can go anywhere with either one of them, and I’m never going to catch them off-guard, I’m never going to catch them unprepared. They will always have a response, and insight, into whatever subject matter comes up during a game. So that plays a key role in it.”

He said the chemistry isn’t just about longevity, either, but about how the three of them interact.

Here’s a photo of the SEC Saturday Night crew having fun at an ESPN photoshoot this offseason: 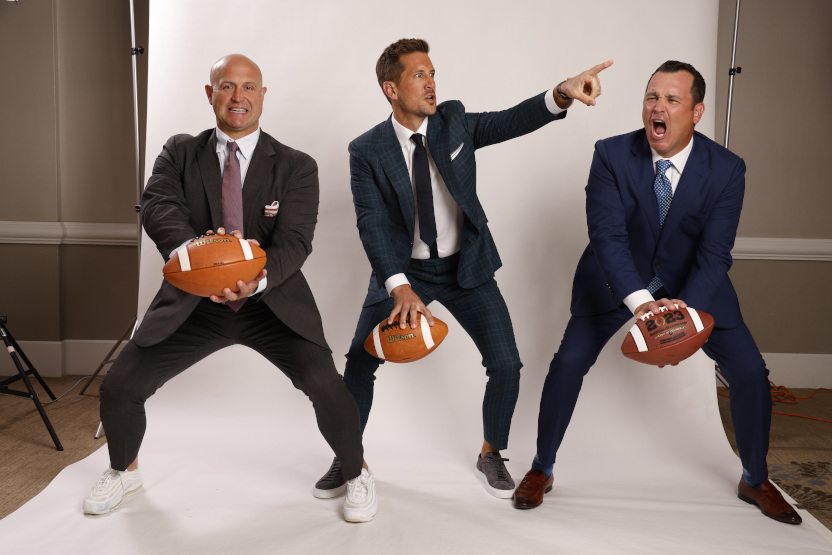 Hart said their group has found a nice balance of Xs and Os game coverage and also having fun.

“First and foremost, I have two guys with me who both played in the SEC, who watch more film than anyone I’ve ever been associated with. They know the game inside and out. And we can talk ball as a trio at any point, and often we do. But we also want people to have the feeling that they’re watching the game with friends, and we’re not talking down to them. We might teach them about the game at one point, but we’re there to have fun; you know, it’s a Saturday night, there’s 90,000 people in the stands. The game is a big deal, and while we take the game seriously, we try not to take ourselves too seriously. Hopefully that comes across. The enjoyment of it is all based in the chemistry that we have as a group.”

The having fun has certainly been notable, as this group has produced a lot of memorable moments. And Hart said most of the comments he gets on the times they do duck away from strict game action have been positive, with a helpful factor being that the knowledge base Rodgers and Cubelic have makes it quick and easy to duck back to the game when needed.

“Ninety percent of the feedback is overwhelmingly positive if we do anything that takes us away from the game. But I think what is unique is that it’s not just a game of grab-ass. Those guys know the game so well that we can take it back and talk about the double-eagle blitz or the RPO action or how to properly grip a ball in the rain, with a guy who played quarterback in the SEC. So I’m proud of the fact that we can have fun and be loose and recognize when the game dictates we’ve got to be dialed in. Because the bottom line is you’ve got to present the game to SEC fans, that’s why they’re there. But I think there’s room to have fun while you do it.”

Hart said it’s also helpful that they’re covering the same conference each week and each year.

“There’s familiarity not just with each other, but with the league as well. We’re covering 14 teams over the course of a season, and doing so for a number of years compounded, the stories of the league, the coaches, the players, the history is engrained in us. So that makes preparation a lot easier because we’ve been in it, we’ve lived it, so to speak.”

Hart, Rodgers and Cubelic will be calling Saturday’s Ole Miss-Arkansas game from the sidelines. The game begins at 7:30 p.m. ET on SEC Network.