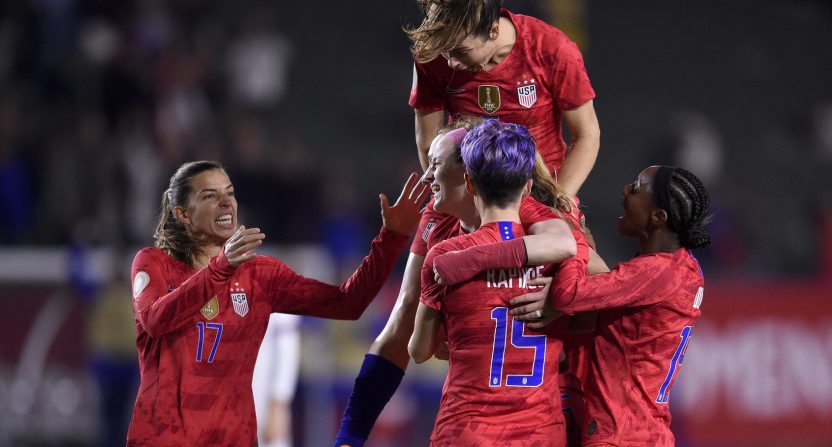 The NWSL announced their rumored new TV deal with CBS Sports on Wednesday, and while the total length and rights fees have not been disclosed, it *has* been called a multi-year deal.

The entire season worth of games will air across a variety of platforms, including the CBS broadcast network, CBS Sports Network, CBS All-Access, and in a surprising twist, Twitch.

Here’s more from the release.

CBS Sports will deliver a total of 87 NWSL matches in 2020 across CBS, CBS Sports Network, and CBS All Access, CBS’s subscription video on demand and live streaming service. Highlights include the NWSL season opener and Championship Game on the CBS Television Network; 14 matches on CBS Sports Network, including both Semifinals; and 71 additional games on CBS All Access. All games offered on CBS All Access will be available to subscribers online at CBS.com, on mobile devices via the CBS app and on all major connected TV devices and platforms. The deal with CBS marks the first time a U.S. broadcast network will present live, national coverage of women’s professional club soccer in the United States.

In addition, Twitch will present 24 free, select matches during the 2020 NWSL regular season. Twitch will also serve as the NWSL’s exclusive international media rights partner outside the United States, making all 108 regular season games, the playoffs, and championship available to global viewers.

This is the second batch of soccer rights snapped up by CBS (which had been a non-factor in the world of televised soccer) following November’s acquisition of UEFA Champions League rights, starting with the 2021-22 campaign.

The “broadcast TV” component of this deal is overplayed a bit: only two matches will be on CBS proper, and those are the first (April 18th, Washington Spirit vs OL Reign) and last (November 14th, the NWSL Championship) matches of season. Twitch gets one Saturday match each week, and the bulk of the rest of the matches are behind the CBS All-Access paywall (with another 14 on cable through CBS Sports Network).