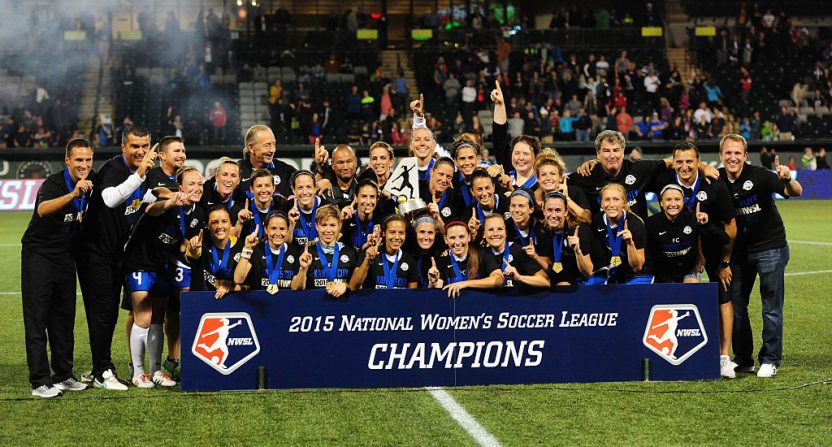 The National Women’s Soccer League’s record of making announcements after the news has already leaked and only a short time before their season continues. There was a lot of silence from the time they announced a match-of-the-week on Lifetime in February to the leak of Jenn Hildreth and Aly Wagner as the match-of-the-week broadcast team in March, and while the league finally got around to announcing that move March 30, they were still quiet on where the non-Lifetime games would be streamed.

That continued through this week ahead of the league’s kickoff Saturday, with sites like Equalizer Soccer reporting on screenshots of a NWSL schedule on Verizon streaming platform go90, but NWSL managing director of operations Amanda Duffy saying details weren’t finalized yet. Less than 48 hours before kickoff, the details appear to be finally finalized, with the league issuing a press release that all non-Lifetime matches (98 this year) will be streamed through go90 in the U.S. as part of a multi-year deal, with those outside the U.S. able to watch through NWSL.com and the NWSL app. Here are more details:

A fully ad-supported, mobile streaming service, go90 will feature 98 NWSL games accessible via live and on-demand streaming for the 2017 season. To access, visit go90.com or simply download the go90 app via the App Store or Google Play. Users with go90 version 3.0 and later can cast live games from the go90 app to Airplay and Chromecast. No registration or authentication is required. Check out the full schedule here: http://nwsl.us/2orAtSh

“We are thrilled to announce our new partnership with go90, and are now positioned to deliver more content than ever before,” NWSL Managing Director of Operations Amanda Duffy said. “With go90’s digital capabilities combined with an enhanced digital broadcast production, we are excited to provide our fans with an entirely new digital experience and eager to introduce NWSL to go90’s rapidly growing soccer audience.”

There are a few interesting things in there. For one, it’s notable that this is free ad-supported content, and it won’t require registration or a subscription. go90 has had its struggles gaining traffic since Verizon launched it in October 2015, and the brand association may have actually hurt it (while they’ve mostly marketed it to Verizon customers, anyone can watch go90 content). There may be a bit more of a barrier to entry for those unfamiliar with go90 then if the games were simply available through the NWSL (as they will be outside of the U.S.), but getting on board with go90 may have some benefits as well. That’s especially true if you read further on in the release, which indicates what Verizon is trying to do here:

“We are pleased to team up with NWSL and bring 98 live women’s soccer matches to fans in the U.S. on go90 and across our owned and operated AOL and, soon enough, Yahoo properties.  This complements our existing commitment to soccer on go90,” said Chip Canter, GM of Verizon Digital Entertainment. “The women of the NWSL are inspiring the next generation of young soccer stars, both young men and women, and we believe that this partnership will serve as a much-needed catalyst for the growth of the sport as a whole here in the U.S.”

Every game on go90 will be produced by Vista WorldLink in high definition with a consistent, state-of-the-art approach, and feature a halftime show as well as brief pre and postgame shows. In addition to the NWSL Game of the Week on Lifetime, Michael Cohen, a veteran broadcaster of nine Olympic Games and three FIFA World Cups, will serve as the league’s executive producer for all digital broadcasts on go90.

Yes, Verizon owns AOL and Yahoo, and there have been plenty of reports that they’ll be working to more closely integrate go90 with those sites. They already made big changes to the service this year, laying off 155 employees in January and rebuilding go90 around the Vessel platform they bought in October. And the NWSL may actually be a great opportunity for them; it’s providing live sports content that at least some people have heard of, and it may get more people to check out go90 (which at this point, has mostly been a punchline that Verizon’s spent $200 million on). go90 content like NWSL games could theoretically be promoted on AOL and Yahoo’s sites (Yahoo in particular has experimented with lots of sports streaming, so an eventual integration might be a fit there) and bring new people to the platform.

It’s also interesting that these streams are going to be produced in high definition, with halftime, pre-game and post-game shows, and with an executive producer like Cohen attached. That sounds like it should make for a pretty good product. Whether there will be the revenue from these streams to make that level of production sustainable for the long run is another question, but we’ll see on that front. For now, it looks like NWSL fans will be able to watch a pretty decent streaming product without paying. They’ll just have to figure out how to use go90.