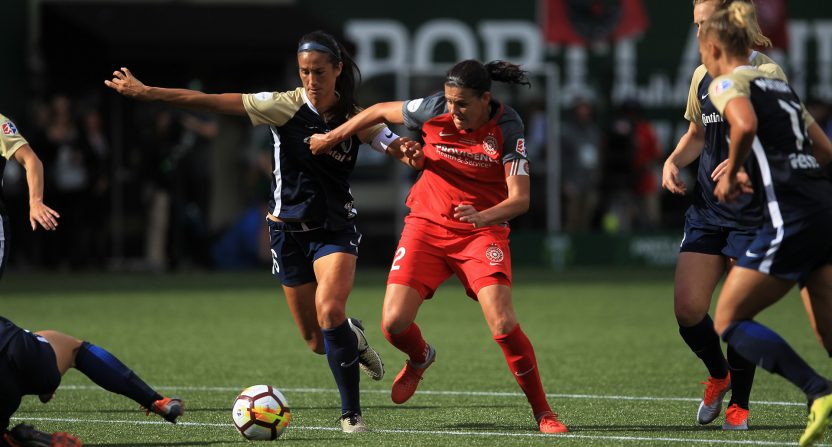 Right before the 2019 NWSL season, NWSL and A+E decided to terminate their TV rights contract a year early. NWSL president Amanda Duffy called the situation a “win-win” but not having a national TV deal was not a great situation, especially in the lead up to the FIFA Women’s World Cup.

Needing to find some place to show games and take advantage of the opportunity to bring in new fans, NWSL and ESPN have agreed to a short-term rights deal for the rest of the NWSL season. Starting July 14, just a week after the World Cup Final, ESPN will show 14 games, including both semifinal games and the NWSL Championship.

In a U.S. Soccer press release, ESPNEWS will show eight games, and ESPN2 will show six. Other than a game on July 21, ESPNEWS will begin the NWSL schedule while ESPN2 takes over in September for the end of the regular season and the NWSL Playoffs.

ESPN’s NWSL schedule has all nine teams playing at least one game and every NWSL team has multiple World Cup players. Just like with the men, club soccer gives players from the same international team the ability to play against each other as well as play with international team rivals. And with every USWNT World Cup player, and a good number of other international stars playing in NWSL, the league can argue they have the best selection of women’s soccer talent in the world.

During Lifetime’s TV deal, they showed a game at the same time every week. That was meant to retain casual fans who may be interested in NWSL but might not follow the schedule too much to watch at different times. With a set time, it’s easier for fans to remember and tune in. That isn’t happening here and that might hurt viewership to an extent but scheduling games mid-afternoon in the middle of summer for TV reasons wasn’t ideal either. Rachel Daly collapsed last year for a heat related illness after playing a 3 pm in Houston in late May. Start times closer to evening may not be as viewer friendly but the players will welcome the move and probably play better, making games on TV more entertaining.

For NWSL, a short-term TV deal carries some risk but NWSL needed to be on TV in some form after the World Cup. With ratings climbing higher and higher for World Cup games, this is the time every four years for NWSL to get new fans or convert casual “only watch soccer every four years” fans into regular viewers. Casual fans aren’t going to the Yahoo app, where out-of-market games are broadcast, so they need to be on TV and be available for a casual audience.

For ESPN, this is a low risk, high reward move. ESPN gets to take advantage of the added interest in women’s soccer and the right fee (if there is one) is probably quite low so that should make their decision a no-brainer. And this gets ESPN an opening into a potential long-term deal and something that NWSL should also be going after; putting out-of-market games on ESPN+.

ESPN+ is where NWSL really needs to go. Fans may need to pay for ESPN+ compared to watching for free on Yahoo but with so many soccer leagues on ESPN+ including MLS, USL, U.S. Open Cup, and international leagues, there’s potential for soccer fans to check out a NWSL game simply because they’re a fan of another league and that’s also on ESPN+. It remains to be seen how this ESPN deal will affect the league but this at least a better situation than not being on TV at all.