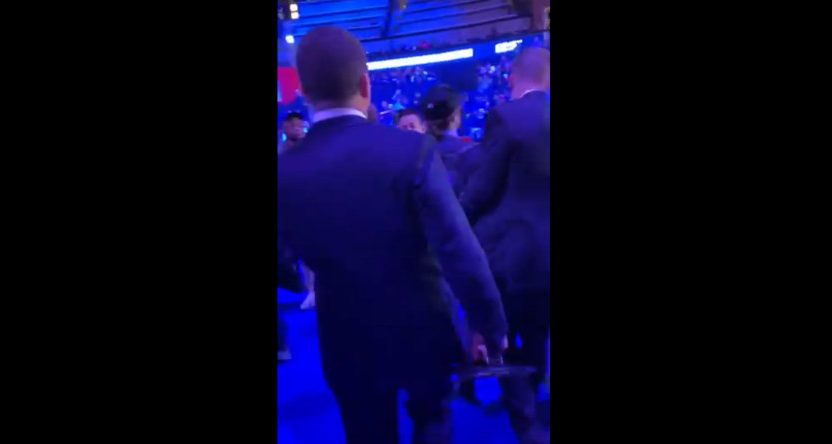 Much of the internet is familiar with the Streisand effect, where trying to censor something leads to it getting more attention. Apparently, though, it’s news to the NFL, at least when it comes to their dealings with Barstool Sports. It shouldn’t come as a surprise to anyone that Barstool personalities crashed the Super Bowl’s media night, as they’ve invaded plenty of NFL things in the past, but the NFL response (having security grab Dave Portnoy and PFT Commenter, escort them off the premises, and having police give them criminal trespass warnings) has only helped publicize Barstool’s stunts more. And that’s only part of their NFL controversies this week. First, here’s the footage of security escorting PFT Commenter out Monday:

The powers that be just gave @PFTCommenter the boot from media night. pic.twitter.com/UbKzqnyB39

PFT Commenter himself wrote about it, and added that the NFL still used his questions in their media night montage:

Then all hell broke loose as I got arrested, shoved by NFL securty, and detained and charged with criminal tresspassing by the Atlanta police department.

…Later, they even called in the FBI who interrogated me to make sure that I was as cool as they thought I must of been probably.Total badass move on my part. Going to give a full blow-by-blow of this encounter and how it compared to my treatment by Westminster Kennel Club security on Wednesdays PMT so please listen.

Oh and this is neat. After having me arressted the NFL used two of my questions on their superbowl opening night wrap-up montage. (1:26 & 4:20). Very cool!

As mentioned above, PFT Commenter doesn’t appear to have actually been arrested, but the removal, interrogation and threatening of him has still led to way more attention than if the NFL just let him and Portnoy ask their questions. Media Night in particular is a time for ludicrous questions, and they fit right in, as you can see from that montage. Fake passes or no fake passes, the NFL created many more problems for themselves with their reaction here. And that was just the start of the NFL-Barstool incidents this week:

Was ready to ask Goodell about Barstool. NFL PR woman asked my name, spoke to another NFL employee, then came back and told me she had to “get to someone else.” What a fucking bore this was.

Look, it’s understandable why the NFL isn’t happy with Barstool. With the Deflategate sit-in at the league offices, the Goodell clown towels and t-shirts (one apparently worn by Saints’ head coach Sean Payton at his own press conference Wednesday), the crashing of conference calls and more, Barstool has shown they’re not going to play by the NFL’s media rules. But evicting them from an already-silly media day event and threatening them with criminal charges just draws more attention to them, and that’s the same story when it comes to physical credential checks and avoidance of Barstool questions.

As the NFL should have learned earlier this week, even cancelling a press conference doesn’t silence the criticism or solve the problem. And overly-dramatic reactions only give Barstool more attention, and more ammunition. PFT Commenter and Dave Portnoy asking silly questions at media night isn’t really a story for anyone but them. Removing them and threatening them with criminal trespass charges is a much bigger story.