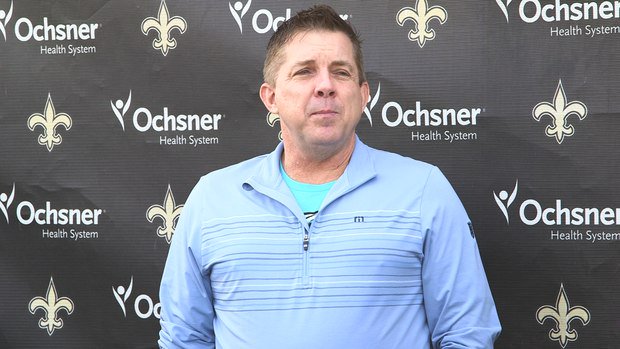 Plenty of fans of the New Orleans Saints are still upset over the obvious non-call late in their NFC Championship Game loss to the Rams, including those fans in Congress, and the lack of public response from the NFL (other than in response to a lawsuit). Meanwhile, Barstool Sports has their own ongoing feud with the NFL, with the latest developments this year seeing Dave Portnoy and PFT Commenter escorted out of media night by police and issued a criminal trespass warning (over using fake press passes to get into the event).

Those two things combined in remarkable fashion Wednesday, with Saints’ head coach Sean Payton appearing to wear one of Barstool Sports’ Roger Goodell clown nose shirts (also seen in towel form, including when they provided 30,000 of them at the Patriots’ 2017 season opener amidst Deflategate) under a quarter-zip (presumably not a Jim Nantz Vineyard Vines one) at his season-ending press conference:

One Twitter user did some graphics work to try and confirm that this is a Goodell clown shirt:

Added an overlay, there is no doubt… But you could say the same about the no-call. pic.twitter.com/7txXu87pur

As per the substance of the press conference, Payton talked about watching Netflix (specifically Conversations With a Killer: the Ted Bundy Tapes and You) and eating ice cream to get over his disappointment. He also had some comments about his interactions with league executives, via Luke Johnson of The New Orleans Times-Picayune:

The first 24 hours after the 26-23 loss that ended the season were when Payton said he allowed himself to be angry. In the days following the game, he spoke with NFL head of officiating Al Riveron in the post-game locker room as well as NFL Executive Vice President of Football Operations Troy Vincent and NFL commissioner Roger Goodell.

Payton said he was appreciative of the call from Riveron, which he described as “brutally honest.” His conversations with Vincent and Goodell happened Monday and Tuesday after the game. Payton described those calls as brief and declined to get into the specifics about them.

“My discussions, briefly, on Monday and Tuesday with the commissioner and with Troy (Vincent) were relative to just not any type of reversal or anything like that,” Payton said. “It was simply the play and any statement.”

But it’s the shirt that’s Payton’s real statement here. This isn’t the first time a NFL figure has worn one of these; as Michael David Smith notes at Pro Football Talk, then-Patriots’ defensive coordinator Matt Patricia (now the head coach of the Detroit Lions) wore a Goodell clown shirt on the flight home after the team won Super Bowl LI in 2017, and was photographed wearing it when he got off the plane.

However, while Goodell was still reportedly mad about that five months later, there doesn’t appear to have been any official discipline for Patricia in that case, and there probably won’t be any for Payton. If the league does try to come down on Payton over this after so much inaction on the blown call, they’ll only make Saints’ fans madder, and they’ll only look even worse. But the NFL isn’t always known for making smart decisions, as can be seen from their whole response here.