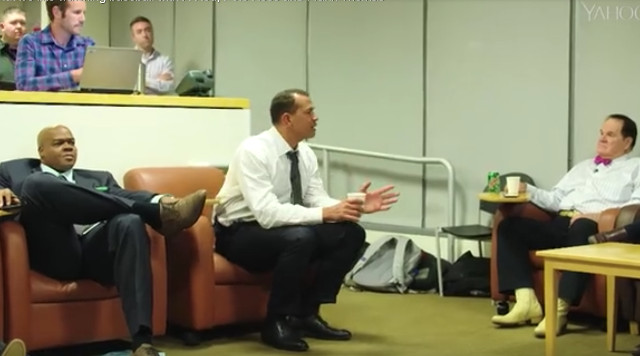 The MLB on Fox pre- and post-game studio show has produced plenty of interesting moments this postseason, from Alex Rodriguez’s baseball nerdery to his back–and–forths with Pete Rose to Rose’s giggles to serious, impressive backstage discussions of hitting between Rodriguez, Rose and Frank Thomas. The show (which also features excellent hosting work from Kevin Burkhardt) has been highly unusual and entertaining, and as Yahoo’s Mike Oz writes, it’s even won over prominent sports media figures like  Charles Barkley (whose involvement with Turner’s Inside The NBA feels like part of the blueprint here).

It’s perhaps even more interesting to see what goes into this show, though, and how these guys interact when they’re watching a game, as this Yahoo video of them watching Game Three of the NLCS (with Fox Sports vice president of production Bardia Shah-Rais, who’s sitting next to Rose) between the Chicago Cubs and the Los Angeles Dodgers shows:

This clip illustrates a lot of what we’ve seen from this show, including Rose’s comic relief (“We’re going to get serious because there’s food back in there!) but also his insightful moments, Rodriguez getting very into specific matchups and stats, Thomas bouncing off the other guys and showing his hitting knowledge, and Burkhardt finding ways to set up his diverse group of analysts. As Oz writes, it’s also impressive that this dynamic works, and that it’s managed to make both Rodriguez and Rose (who each have numerous critics throughout the baseball world) generally-likeable personalities:

The pairing of A-Rod and Pete Rose, on its face, seems like a live TV trainwreck waiting to happen. Last year when Fox announced the two of them, along with Hall of Famer Frank Thomas and veteran studio host Kevin Burkhardt, would be handling their postseason coverage many people tuned in just to the see the carnage. Turns out, A-Rod was actually quite good and Pete Rose, while stuck in his old-school ways, kept you guessing and, sometimes, laughing.

When Fox got the group of them got back together again this year, it changed from a possible trainwreck to the type of live TV where you tune in to see what’s going to happen next. What’s followed is viral moments wrapped up in insightful baseball talk like we’ve never seen before. This isn’t another plain baseball talk show with interchangeable analysts. It’s not another postgame show that you simply leave on after the game. It’s something you seek out.

It’s more in the key of TNT’s uber-successful “Inside the NBA,” where Barkley sits next to Shaquille O’Neal and Kenny Smith these days on what’s the most successful sports studio show around. But Fox is doing it with two guys carrying more baggage than a 737.

Making Shaq likable? Easy. Shaq’s been likable since he was hanging on rims at LSU. Making A-Rod likable? Therein lies a challenge. But it’s happening live in front of our eyes. Just look around Twitter when he’s on-air and it’s obvious. This A-Rod, people like.

“It feels good, I gotta admit,” Rodriguez says. “The fact that some people think I’m doing a good job or they’re getting some education, some knowledge, it makes me feel better than when it’s the other way, that’s for sure.”

The Inside The NBA comparison is an apt one, as viewers are tuning in to see the camaraderie and exchanges between these guys, not just their particular baseball comments. And it’s noteworthy that Barkley’s a fan:

Alex Rodriguez was sitting in his seat in the Fox Sports studio, camera tuned on him, making the kind of surprisingly good live TV he makes these days.

His phone buzzed. It was a text from Charles Barkley.

When Barkley — a man who has built a reputation for himself as a sometimes-grumpy, always-honest TV star in his own right — likes what you’re doing, something has to be going right.

Fox’s show isn’t going to work all the time, and it isn’t going to work for everyone. With these kinds of personalities and this many attempts at comedy, some parts will undoubtedly fall flat for some viewers. This is also a much different baseball studio show than we’ve typically seen, and that won’t play well with some purists who just want to hear analysis, not personal interplay.  There are plenty who dislike Rose and Rodriguez for good reason, too, and this show may not win them over.

However, this show is catching on with a lot of people, and it is creating a pretty remarkable experience. Fox should be praised for setting the continual lineup of Burkhardt, Rodriguez, Rose and Thomas and allowing them to develop chemistry, and also for giving them room to explore and to try different things. Oz’s piece and the accompanying behind-the-scenes video show how they’re getting there, and illustrate the work that goes into it. So far, this appears to be a pretty significant success. At the very least, it’s certainly memorable.

Disclaimer: Andrew covers the CFL for Yahoo Sports Canada. He is not involved with Yahoo’s MLB coverage.