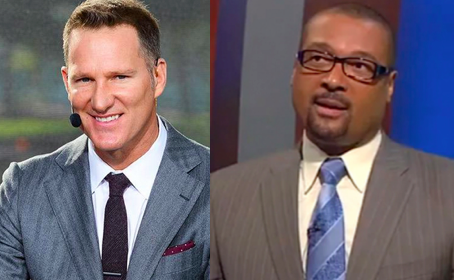 Whether you agree or disagree with Kanell’s college football opinions, they can be taken in a spirit of fun — no harm, no foul.

On the matter of CTE — football’s most urgent issue in the present moment and our lifetimes — what a commentator says cannot be easily laughed away.

The irony here? Kanell wants to be taken seriously on the issue and, presumably, as a football commentator at large:

CTE is real, concerning, and should be taken seriously. Still a ton of unknowns. Player's mental/physical health should be getting more talk

Yet, almost everything else Kanell tweets on the topic makes it nearly impossible to view him as a serious and legitimate commentator — not just on CTE, but on football in general.

As a starting point, consider Thursday night’s latest 30 for 30 from ESPN, an expansive documentary on the 1985 Chicago Bears. The final third of the 100-minute film spent a lot of time detailing the experiences of players from the team who were affected by traumatic injuries. These events greatly affected these players, significantly altering their quality of life. Former Bears safety Dave Duerson shot himself in the chest to preserve his brain for study of trauma and was discovered to have CTE.

Then there’s Jim McMahon. The quarterback’s cognitive world was a cluttered and cloudy mess for many years, before doctors were finally able to expunge a lot of accumulated fluid from his brain. McMahon is not necessarily out of the woods in terms of health problems, but he lives with a lot more cognitive clarity and a lot less pain than he once did. Advances in neuroscience and the treatment of neurological problems certainly helped McMahon.

In the midst of this, Danny Kanell — who wants to be taken seriously — tweeted the following:

Yep, that’s exactly how to further a discussion which will be taken seriously.

Stepping back from Thursday night’s tweets during the 1985 Bears documentary, Kanell has said incendiary things in other situations which reinforced the worst instincts of football.

This is not a very old event, but given the hype train which is allowed to pick up steam before the Super Bowl, it’s easy to lose sight of it: Just before the AFC Championship Game between the New England Patriots and Denver Broncos, Kanell recommended that the Broncos take “two personal foul calls, like 15-yarders against (Patriots quarterback Tom) Brady.”

Let’s very briefly address that statement: Kanell, in his zeal, promoted the idea that football should be played improperly — at least to the extent that rules (reasonable ones, not bad ones) are broken. Kanell accordingly promoted the idea that it’s not enough to merely hit a player hard and cleanly. No, he advanced the idea that it was necessary to hit a player late… multiple times. Kanell’s statement certainly suggested the notion that it’s extremely difficult — maybe even impossible — to send a message only with legal hits allowed by the rulebook.

The man who fervently believes that a “war on football” exists in America wants the sport to be played outside its rulebook… which is, of course, a form of war against football itself.

Is this what college football fans wanted when Mark May was dumped? Is this what consumers of sports commentary signed up for when they wanted May to take a hike and leave College Football Final?

It was widely celebrated at the time, but it seems as though one out-of-his-league carnival barker has been replaced by another.

Sure, Ohio State fans don’t mind this swap, with May on ABC, a network where — with much less face time on the air — he can’t do nearly as much damage to brain cells.

For national viewers? It’s hard to see how they’re getting a positive return on this transaction.

The fundamentally and centrally exasperating characteristic of Mark May is that he would go out of his way to consistently — as a point of practice — irritate certain segments of a viewing audience. Whether it was a sign of intellectual independence or an internally-encouraged maneuver designed to generate publicity and strong audience reactions, the constant nature of May’s button-pushing reached a saturation point. When such a threshold is reached, a public commentator becomes a caricature more than an independent voice.

This happened with May. It is happening with Kanell.

For many if not most, that process of going from “Hey, let’s see if May’s replacement is any good,” to “Welp, I’m done with Kanell,” has already run its course.

It didn’t take very long to do so.

Kanell promotes unnecessary roughness against Tom Brady (multiple times). He makes unnecessarily dismissive statements on delicate issues such as CTE, laughing at those who have the temerity to suggest that there could be inherent risks involved.

That kind of voice — on social media, radio, or television — is hard to take seriously.

Did I really just type that sentence?

As the saying goes, “Watch what you wish for… you just might get it.”

As the other saying goes — one articulated all the time in the college football coaching business — “Go ahead and fire your coach; just make sure you hire a better one.”