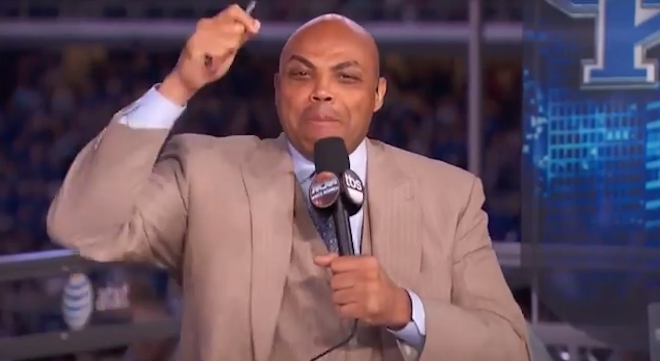 Charles Barkley has often been known for controversial comments, but many of his comments that make headlines have been about subjects outside the NBA’s borders. Not this time, though; Barkley and the rest of Turner’s Inside The NBA crew are in Toronto for the NBA All-Star Weekend, and Barkley spoke to Dime and gave a rather contrarian take on Golden State Warriors’ star Steph Curry:

DIME: We saw in the early 2000s with Shaquille O’Neal that it was obvious that he was going to score – just with his sheer power, size, and skill. It was kind of the same with you in the early 1990s, too. Does Steph compare to that at all? That feeling of inevitability you guys provided at your peak?

But he’s more than a shooter, right? Because he’s –

No. He’s not more than a shooter. He’s just a great shooter.

So, he’s not an incredible playmaker? Doesn’t make the game easier on his teammates? Stuff like that?

I wouldn’t say that. But he’s not a great playmaker. He’s just a great shooter.

Barkley goes on to criticize the remarkable 51-point game (with 11 three-pointers and a 25-point first quarter) Curry had against the Washington Wizards Feb. 3, which saw Curry described as “brilliant, bold and otherworldly” by some. The Round Mound of Rebound was not so impressed:

[H]e played last week against John Wall and scored 51 and gave up 41. And most people think that John Wall had a better game, because Steph had 10 turnovers and John Wall had 41 and 15 assists.

Wall actually only had 10 assists, and he had plenty of praise for Curry afterwards, saying “He made some unbelievable shots,” but don’t let that get in the way of your hot takes, Sir Charles. At least he’s consistent, though; this is far from the first time Barkley’s hasn’t been as high on Curry as most people, including his January argument that Spurs’ forward Kawhi Leonard is a better player:

Barkley’s known for his opinionated analysis, and that’s part of what makes him so valuable to Turner, so this isn’t a huge departure for him. It’s also possible that he isn’t as high on Curry as most thanks to his own background as a post player; Curry’s game is at the opposite end of the spectrum, so it may not be as impressive to Barkley as what Shaq did and what Leonard’s doing. Add in the nostalgia factor of remembering the positive moments of the past and overlooking the negative ones, and it’s no surprise Shaq and himself stand taller in hindsight. His Inside The NBA colleague Kenny Smith strongly disagrees, though, as he told Dime:

Smith glowed during a long-winded, multi-faceted description of what makes the Warriors superstar so, so great. When asked specifically if he agreed with Barkley, though, The Jet was far more succinct.