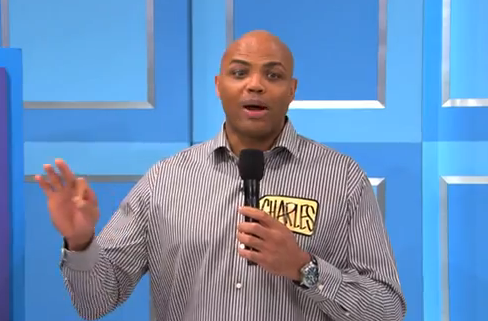 Thursday night’s edition of Inside the NBA on TNT had one segment that was rather different than the show’s usual fare, focusing on politics instead of basketball. Host Ernie Johnson asked Charles Barkley about the upcoming Republican debate on CNN (corporate synergy!), and Barkley responded by bashing both Donald Trump and CNN’s Trump coverage (corporate anti-synergy?). Some have seen this as a welcome overall outcome for Turner, though, and a ratings grab:

Ratings are probably at least part of the story here (Johnson’s question suggests this was very much a planned segment as opposed to Barkley going rogue), as Turner realizes (as they should) that clips of Sir Charles offering unusual analysis are going to do well for them (even if it’s critical of CNN). However, that doesn’t mean there’s no value to Barkley’s commentary, or that it has no place whatsoever on Inside The NBA. Yes, it would be weird to see an always-serious, always-news-focused sports show such as ESPN’s Sportscenter or NBA Countdown turn to a tangent on Trump and CNN, but Inside The NBA has made its well-deserved reputation from being willing to offer humor and go to unusual places, not just providing standard basketball analysis. It’s also notable that they’re not the only sports show to venture into politics; Keith Olbermann often did so before ESPN parted ways with him again, and Fox Sports Live and Garbage Time have both had their political moments too.

Considering the person involved here is also important. Barkley has become famous for his thoughts on a variety of subjects, not just basketball, and he’s mulled running for public office several times. Does that mean he should be a featured analyst on serious CNN political shows? Probably not. But it’s clear he has some thoughts on what’s going on in the Republican field and in the media coverage of this election, and it makes some sense for Turner to showcase those on their own platform under their own pre-picked circumstances, rather than wait until TMZ corners Barkley at an airport and gets him to say something noteworthy about Trump. Also, it seems unlikely Barkley was forced into this; he was given a platform to express his views and he did so in a largely thoughtful and interesting manner.

Is putting this in the middle of Inside The NBA ideal? Probably not, as some will be tuning in just for the basketball talk and annoyed with the political commentary. Still, it’s hard to think of a Turner show where this would be a more natural fit; you could have Barkley as a CNN guest, but that’s pretty awkward in its own right, and they don’t have a regular sports (or sports/politics) show this would seem to fit on. Inside The NBA viewers are used to tangents, in-jokes and Sir Charles’ views on a variety of aspects of life, so while this is a little afield, it’s not that far out of the norm. While it may seem like an odd fit at first, this is pretty good content, and content that will be enjoyable to a lot of viewers. Why’s it so objectionable for Turner to create that?

Overall, Barkley really can’t be blamed for this; he was given an opportunity to speak his mind, and he did so, even to the extent of taking a bit of a shot at a corporate sibling. Turner likely knew what they were getting from prompting him to talk politics. On the Turner side, too, sure, this is a little bit of a ratings grab and maybe a little too much corporate synergy (just talking politics in general at some point would seem more natural than doing so ahead of a debate on CNN), but it’s not completely outside the variety of topics Inside The NBA often discusses, and it’s not necessarily something they should be pilloried over.

Some basketball fans absolutely will disagree with Sir Charles’ political thoughts here, and that’s fair. It’s notable that some will disagree with whatever opinions he offers, though, whether they’re on basketball or not. Turner got their star talking head to deliver some memorable soundbites, and some that have received coverage around the web. Meanwhile, Barkley got a forum to express his views, and viewers everywhere got a pretty entertaining segment. That doesn’t feel like a loss for anyone, or like something that should be condemned out of hand just because it had benefits for Turner and Barkley.