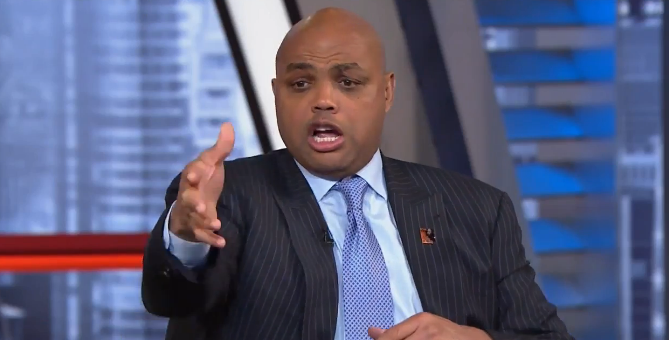 Not one to be bashful with his opinions, Charles Barkley took direct aim on Monday night at the carnival barking styles of sports talk show pundits that fall under the “embrace debate” content strategy that has increasingly become a staple of sports television.

The conversation starts as Barkley is asked (or rather thrown a planned softball question) why he injects “in my opinion” frequently into his analysis and commentary. Barkley responded with the following below.

When pressed for more, Barkley specifically called out Bayless and his matter of fact confidence providing the masses with hot takes spanning all of sports opposed to Barkley, who implies he limits his commentary to mostly basketball and doesn’t present his opinions, which have been known to be provocative, as statements of fact.

Barkley’s full comments are below with the rest of the Inside The NBA’s crews approving banter and inquisitive needling stripped out:

“They say it matter of factly.”

“I don’t want to call out certain guys.”

“We all know I hate Skip Bayless. But Ernie listen, we don’t know everything about ALL of these sports. We’re paid to give our opinion,it’s just our opinion. But you don’t see me talking like “Well like this guy isn’t a good football player, this guy isn’t a good baseball player because you don’t know anything about baseball or football just because you watched the game! I always preface my opinion with “in my opinion”, because it’s just in my opinion.”

Barkley makes a pair of interesting points. Can media personalities really have expert level analysis spanning multiple sports, and is the brash presentation of often contrarian “hot takes” a disservice to sports fans?

A lot of our staff and readers certainly agree, as would the many enlisters in the Richard Deitsch’s anti-“embrace debate” online militia. That said, sadly, ESPN and others have had a lot of success with this strategy as have the personalities and producers who fall down the slippery slope of providing insincere, contrived, and noisy commentary as daily fare for their viewers.

While Barkley certainly makes some good points here, it’s not like he and the Inside The NBA crew are totally free of blame, as they aren’t exactly regarded as a bastion of high brow sports commentary and journalism, and Barkley himself has been known to provide some extremely provocative comments covering basketball and beyond.

Still though, it’s interesting to hear Barkley go after Bayless who more or less has an almost formulaic approach in causing a stir with topical rants meant to draw attention to himself. In my opinion, Sir Charles was right on the money with this one.

View all posts by 10up